The power of the internet purveys in the case of Stamatios Fragos, who has had a whirlwind three months. His lamps, which combine traditional elements of design with a concept of concealed illumination, are a product of his fascination with constructing spatial intimacy. Despite just starting his practice in April 2021, the Montréal native has garnered recognition in the city’s thriving design community in addition to a substantial Instagram following. He has since collaborated with the global fashion and design conglomerate SSENSE – and we’re sure there is a lot more to come out of his studio in the near future.

FRONTRUNNER speaks to Stamatios about design school, his Parállilo collection, and the beauty of experimentation.

How did you get into design?

Oh wow, it was a long journey to get here. I got into design while I was changing programs a lot because I was unsure about what I wanted to do. I wanted to do something that was artistic yet impactful, and I searched a lot of different avenues before I realized how much the built environment affects me and how I operate in it. I tried dance for a while, thinking maybe that was the way I could get into it. I thought I could maybe curate spaces, or that maybe I could help people through psychology, so I tried both of those out for a bit. Eventually I realized that physical space itself is so important to me, and that it was the way that I could influence people, make changes and help others. So then I went into design!

How do you think that Concordia’s Design program, and Montréal overall, shaped your practice now?

What was really cool about Concordia was that it was more of a general design program, one that focused on the artistic way of doing things. It was less technical and you had more experimental freedom, so that helped my creativity, in terms of finding what was special to me. We had classes like graphic design, history, furniture design, and more theoretical stuff – that way, we got to try a bit of everything and then eventually find what we were interested in and go with that. If I was in a specialized program I maybe wouldn’t have had the opportunity to explore myself creatively, and get to the place where I am today, since my designs are very experimentally inspired. In terms of Montréal, I’ve been here my whole life, born and raised! It’s a very special place to me, I know the city like the back of my hand. I’ve explored so many different places here, and there’s so much potential and so many amazing creatives and designers who are located here. I wanted to be a part of that, and help continue the greatness in the community. Through my program I met so many creatives and cool people as well.

Speaking of Montréal, you’re about to launch your collaboration with SSENSE – congratulations, that’s huge! Could you tell me about the process in terms of working with the brand and scaling up your design production for them?

It all really took me by surprise! During the end of my degree, I started working on my brand. I took a lighting class in my final year, and I got super inspired to create this project. I worked really hard on it, and eventually thought ‘oh, maybe this could actually be something’. Then I worked all of my last semester on creating my business and my website, which launched in April. I got so much positive feedback off the bat, and a lot of people were sharing my posts. It was really nice to be validated for all the hard work I did. Because it was being shared on Instagram, I got reached out to by a couple people, and then I got in contact with SSENSE who were interested in having me on board and signing me. I was kind of shocked – I was like, I just started! It was really exciting because it was a great opportunity, but I honestly thought I was just going to be making lamps on the side. I believed in myself, but this experience taught me so much in such a small amount of time, and gave me so many skills, especially because SSENSE ordered such a large quantity in such a small amount of time. I just wasn’t expecting any of it at all! 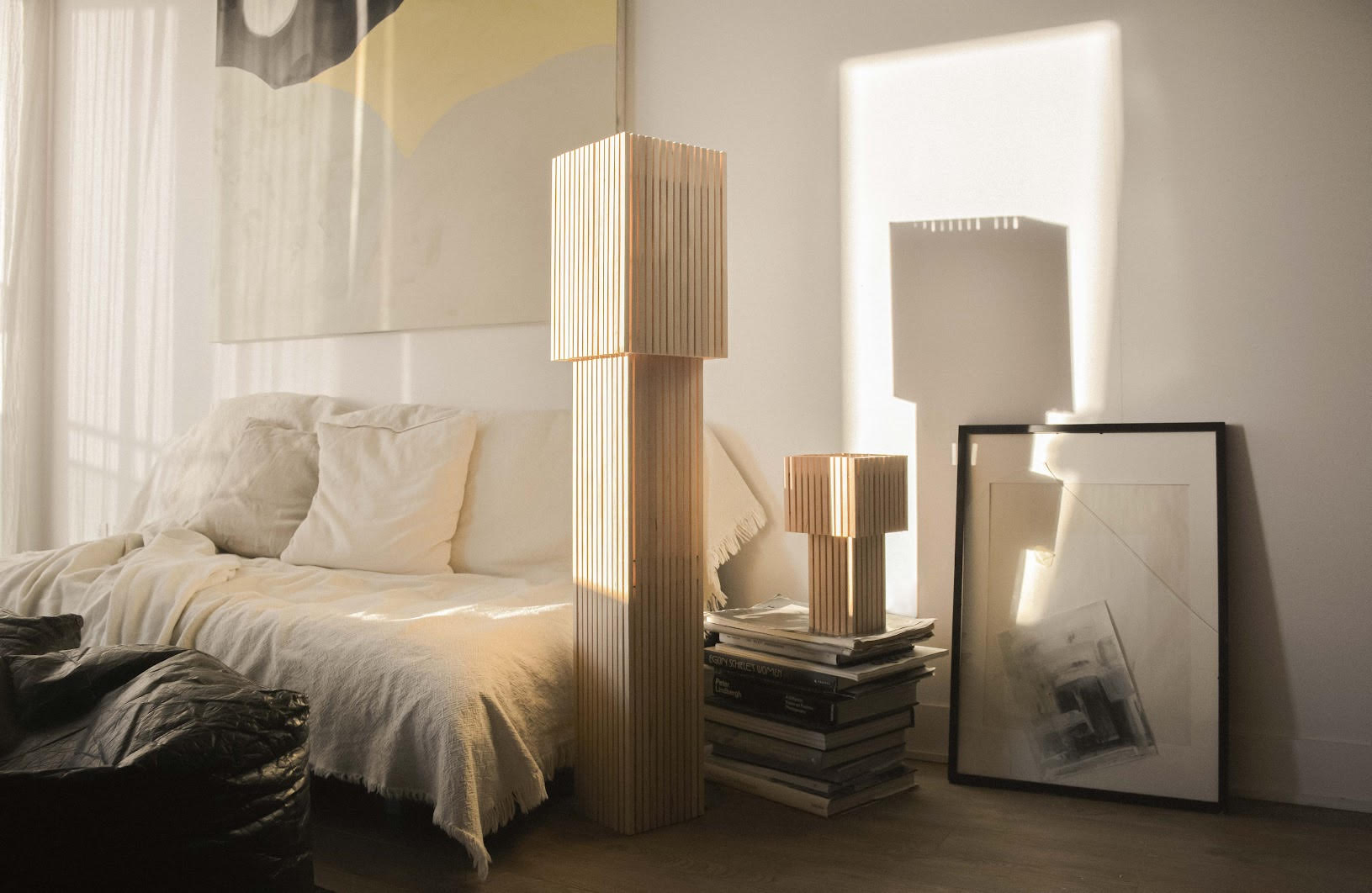 You’re starting off with your Parállilo collection of lamps. Where did you get your inspiration for it?

Generally, what really inspired me about lighting itself was that spaces can be very personal, and I really like to personalize my own spaces. Lighting invites so much intimacy and allows you to curate the mood of each space. I found myself going into rooms and manipulating the lighting, and it changed my mood and the way I interacted with people. I really liked that aspect of lighting, and I’m very sensitive to that kind of thing. That’s what got me into lighting itself.

With this collection, the idea first came to me when I was making a bench for a friend, who contracted me to do an outdoor patio set. My brain inevitably went to making slats, because the bench had to withstand different types of weather and not rot. As I was doing lighting in school, I saw a lot of interesting parallels in terms of having space in between furniture to make it functional. It’s interesting how we have to simultaneously hide but show the light inside of a lamp. I was experimenting with types of design, and how everything fits together – it allowed me to integrate these attributes into something it wouldn’t normally be, in terms of lamps. I was getting inspired by a lot of Greek Columns and the classical order, and pillars in general. In Greco-Roman architecture, there’s a lot of different materials that set moods: there’s marble, there’s stone, and each one has a very specific vocabulary and emotion tied to it. That’s why I experimented with different types of wood, such as maple and walnut. For SSENSE, I actually made a metal exclusive. What I like about each one is that each one has its own message and emotion it conveys based on its material.

Would you ever consider doing anything other than lighting?

I think right now I’m focusing on lighting; I want to expand my collection into sconces, overhead lighting, and still continue to play with materials. I think eventually I’m also interested in experimenting with home goods that give off the same message of hiding yet showing things at the same time. Vases would be cool; some want to hide the stem of a flower, but show the water.

In the design world, if you could change or comment on anything that you see prevalent, what would it be?

It sounds so cheesy, but remember to have fun! I found that a block for me, at least, while creating things was that I thought everything had to already be at its final stages before it was even at its first. As someone who likes to experiment with material, that definitely was a block, because I felt that sometimes as designers, we automatically think of the end result and every step we take to get there. We don’t include the beauty and the discovery that happens in those creation phases, which allows things to change and develop. My designs have changed 100 times over during the creative process, and I could have been stumped a lot of times if I hadn’t allowed my designs to look different. Maybe they don’t end up being the idea I thought they would be, but they ended up growing into something even better. Especially while you’re designing functions and the way things work, it impacts the way things would look without thinking about how they get together. I think just having fun and experimenting and keeping the creative spark there is important, and not getting so caught up in technicalities. 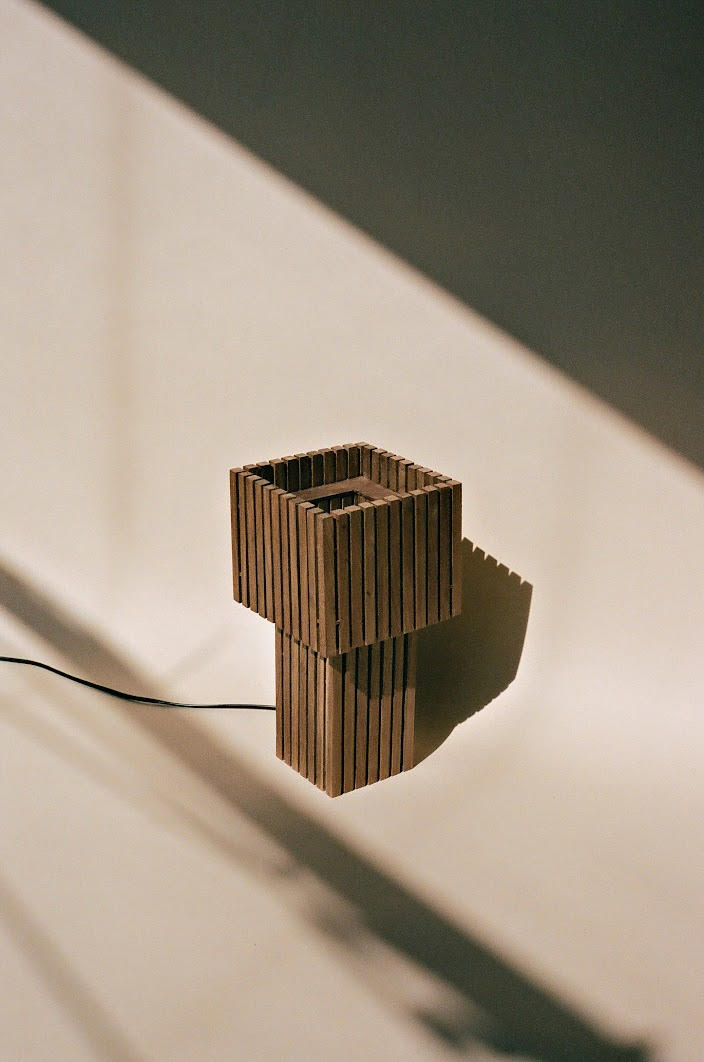 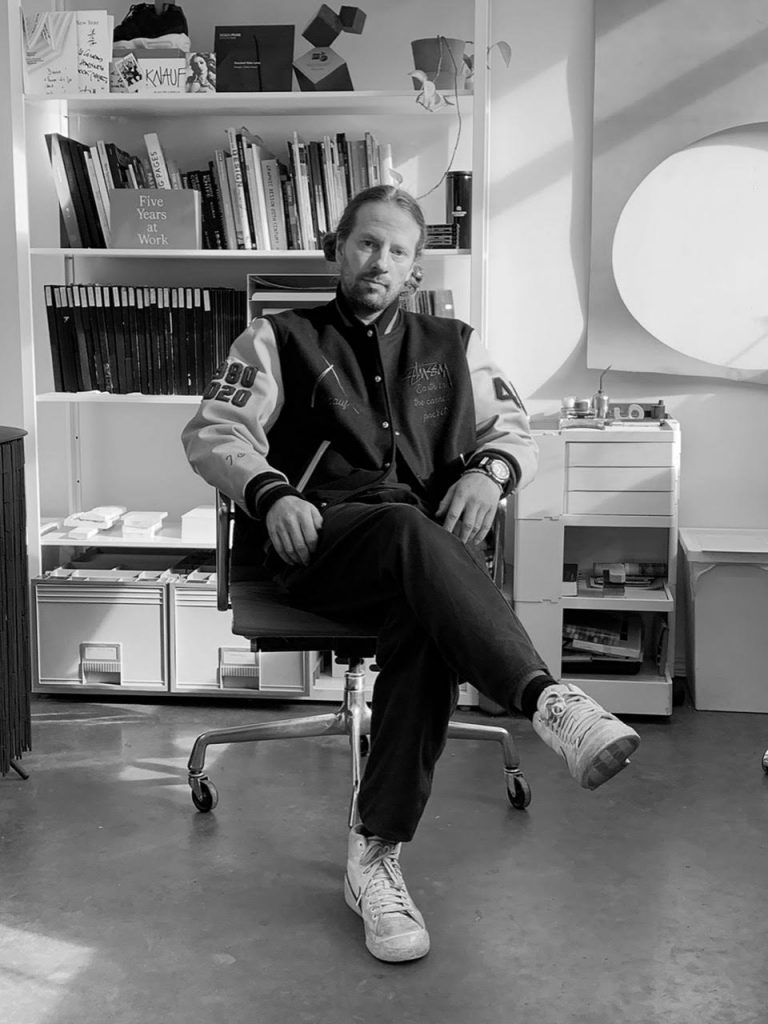 Industrial designer Calen Knauf won the Rising Star Award at the Stockholm Furniture Fair 2017 and has collaborated with companies including Stüssy and Tetra.