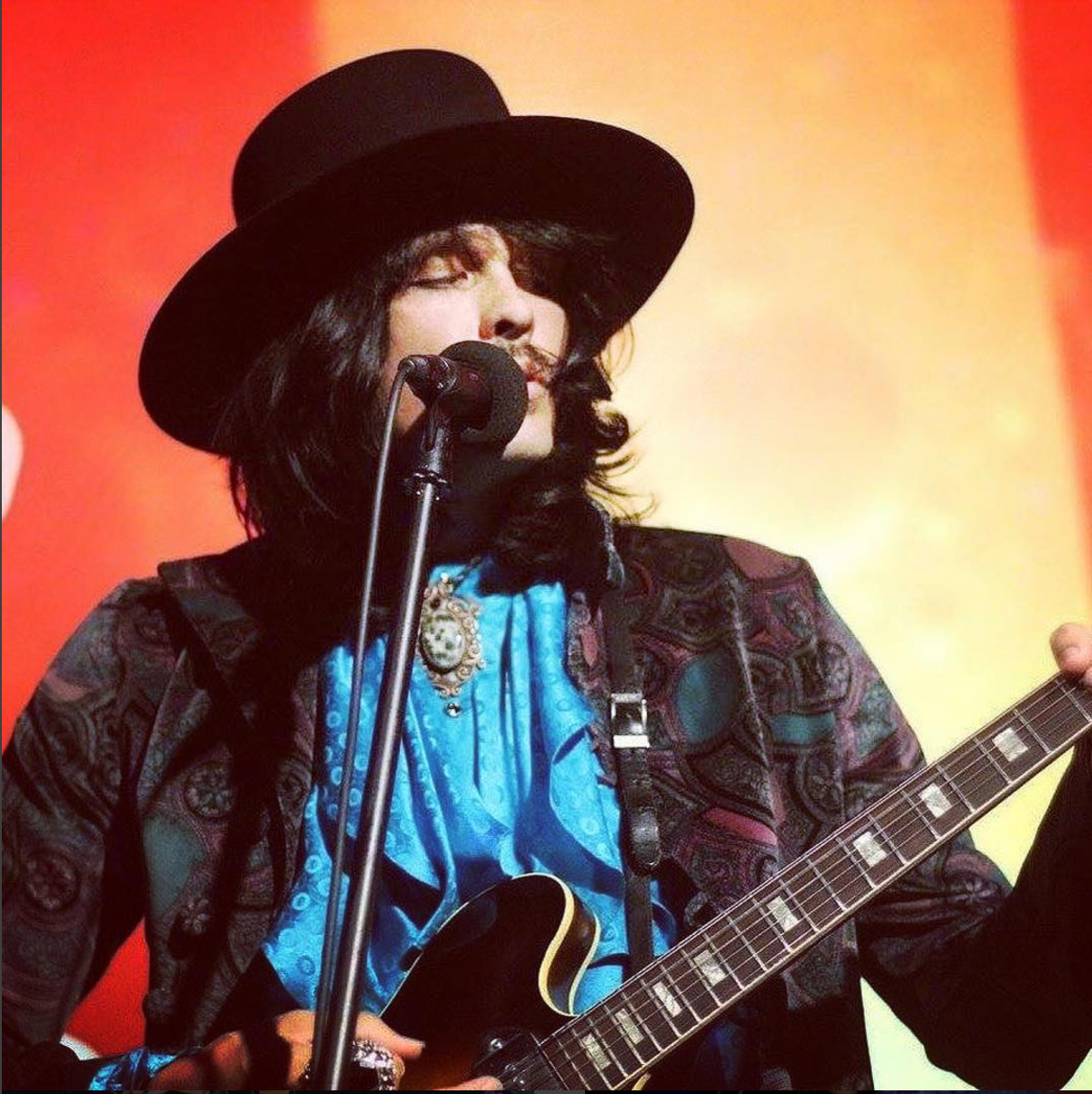 JD King is many things. He’s a multi-instrumentalist (he taught himself how to play the bass, saxophone, and flute at a young age), a photographer, producer, a sartorial vision from another era. On a regular day, one can find JD clad in a wide-brimmed hat, carefully selected vintage clothing, or custom-made garbs. JD has a tendency toward quality craftsmanship that is not only channeled through his appearance, but in his music.

In 2013, a few years after releasing his first album, King joined Pete Yorn to form The Olms. The duo had a successful run, but JD has since gone solo, making music that is more personal to him. His album Moon Gardens (coming out this Fall) gives us a glimpse into his inner world, which has proved alluring.

JD cares deeply about every element of the music-making process. He prefers analog to digital and is willing to jump through a hoop or two to see his visions to fruition. JD’s voice is velvety, the sound smooth in “Eloise,” the second single off of Moon Gardens. Retro-minded “Midnight Rendezvous” has been streaming through my earbuds the past two days. Accessed only via Youtube or his social media pages, JD breathes life to Paul McCartney’s Helen Wheels in a gorgeous cover recorded “just for fun.”

You began as a photographer. Do you think studying another artistic process at a young age while learning music informed your songwriting or inspired a certain style for your future musical work?
Yes, it all goes into the pot of inspiration and shapes your outlook on things you approach in the future. My songs carry a lot of visual elements, which is how my mind seems to dominantly process. I like to see my music.
Tell me a little about your recording process for Moon Gardens. You wrote on your website last year that you were in the process of putting together an all analog studio. What was that like? Why is analog important to you and what makes that a key ingredient to your sound?
It’s been a spiritual experience. I see now why everything sounds so good in vintage recordings, especially when trying out tones and meshing textures of sound. The essence is magic. To me, the best recordings I’ve ever heard in my life are completely analog productions, all of them. I often only listen to records or reel tapes and the sheer amount of engineering that went into the equipment from pre-1975’ish are still unsurpassed today. Nothing has the warmth and depth of the sonic qualities the linear electromagnetic vibration can achieve. Digital is an easier way, but if you ask someone who has studied and compared sonics, they know it’s a cut corner. Talking with studio guys who saw it happen, they always mention how studios were just trying to cut costs or were going for higher sound manipulation while sacrificing the quality. Listen to an actual high quality record from the 60’s and then a digital file from now. A digital file can usually only write three tiny slivers of a wave form leaving all of the beautiful overtones out. Kids aren’t getting their fair shake if they are only listening to digital. Yet, I hear vinyl and tape production is coming back. I’m all for it. 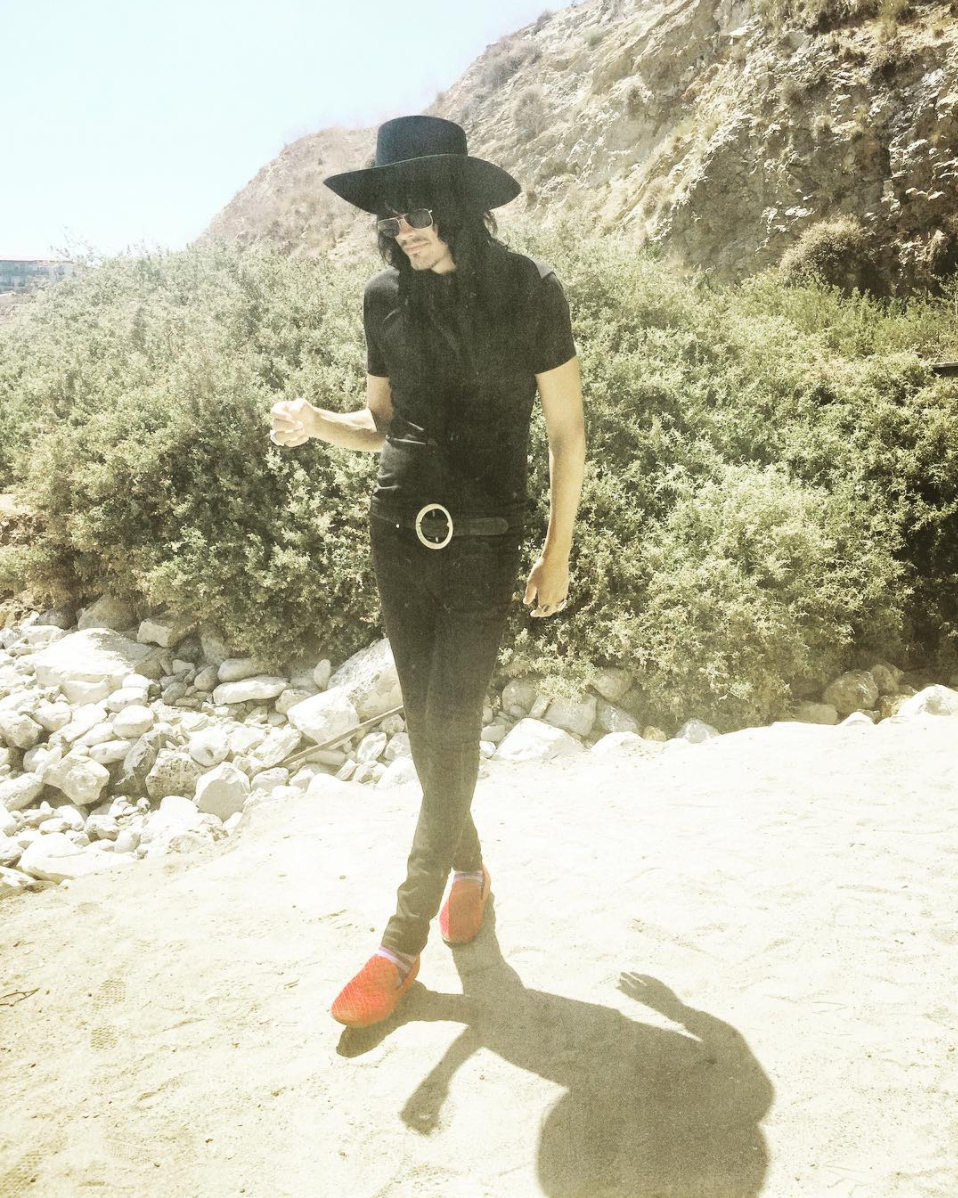 You have collaborated with Pete Yorn as one half of The Olms. Tell me how you guys met and about how that project has impacted your solo work.
I met Pete through Linda Ramone and we were instant friends. We got together and made some music in my studio later on and it always just sounded good, totally original, and we had fun. We have a sound together. I learned a lot of the music business from him too, he’s such a talented professional entertainer and it inspired me to evaluate my outlook with my own music persona as well. 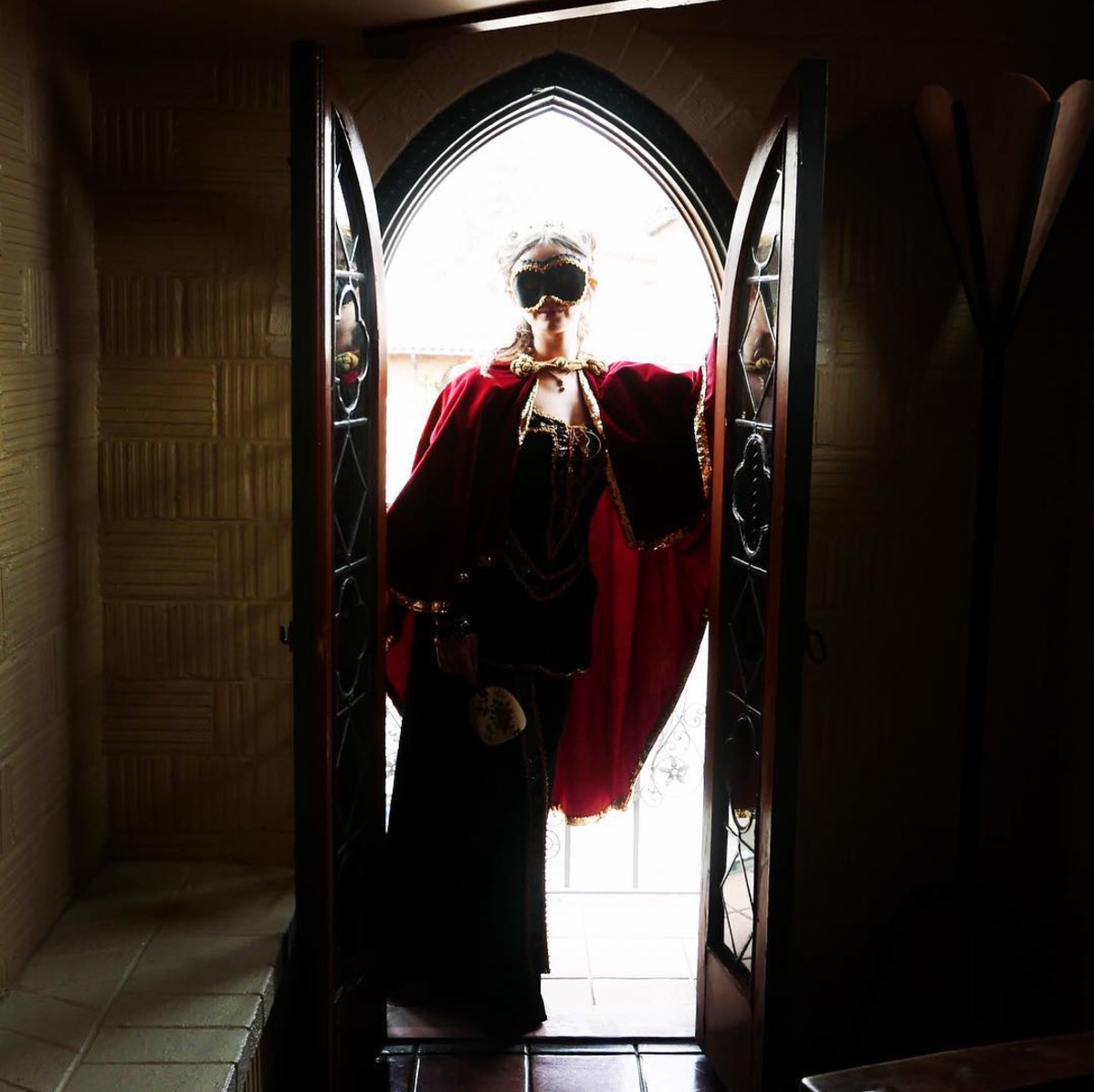 “Eloise” is a fun song and video. The audience enters a world where you and your beautiful love interest are dressed in a romantic Zoro-like cape, mask, and hat. You have a unique and classic style that is both a throwback and fairly singular. Where do you find your vintage threads. Did you have an image for how you wanted that to come out or is it reflective in some way of the tone or environment in the music of the time that you are seeking?

Thanks! For “Eloise”, the capes were gifts from designer Hedi Slimane while he was designing his Palladium Collection for Saint Laurent. The rest is mixed with custom garments from South Paradiso, Baron Hats and Trashy Lingerie. Linda and I usually have everything made custom. I don’t really find much in the wild. 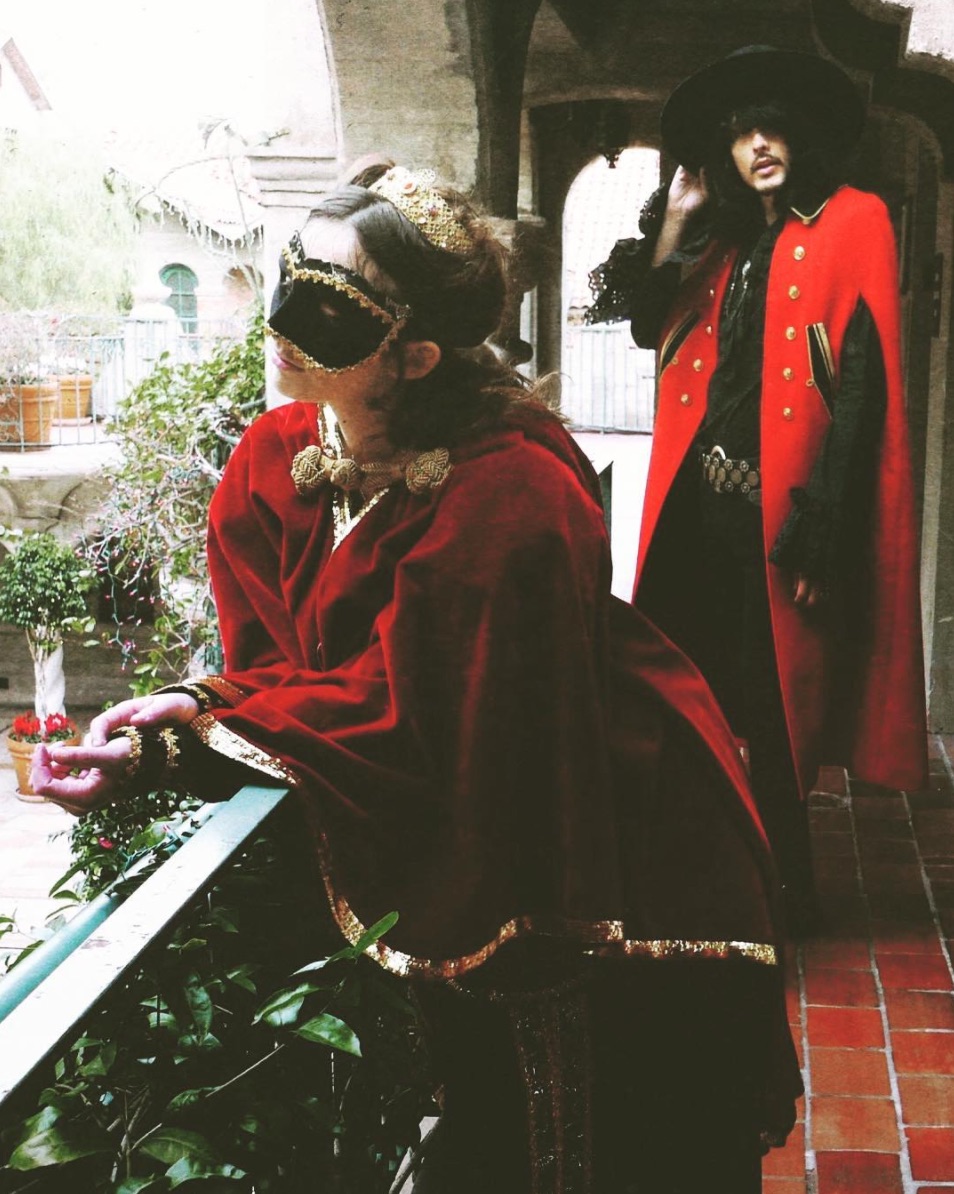 I always have an image to be conjured, it’s like breathing to me. Why live if what you project and are perceived as is lackluster? I’ve always been like this since I was young, habitually designing or evaluating clothes, music, people, and so on. It’s hard to turn it off. Also, I don’t seek a time, it’s more of seeking an aesthetic cure that needs to be realized. Eras from the past were just usually better at achieving it through centuries of quality and craftsmanship. I take the romance and optimism from it and leave the rest. 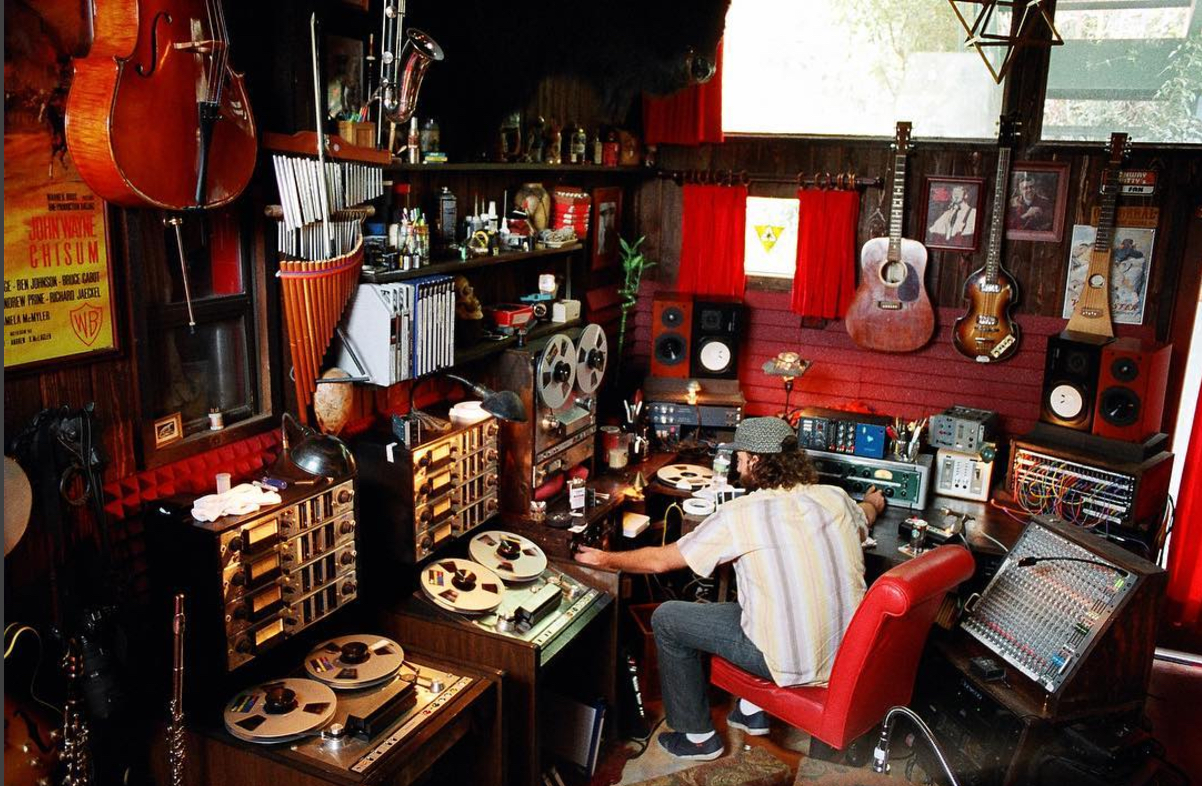 Tell me about your live sound? Who are you playing with these days and what sounds or instruments are key to your kit?

Right now the line up is Malcolm Cross on drums and Giuseppe Patanè on Bass who were in The Olms touring group, and a new kid Stevie C. who plays lead throughout the new album. It’s a solid band, each member a total hotshot and fun to watch.

My instruments now are a 68′ Gibson ES-330 (for the p90 pickup tone) w/ Echoplex EP-2 through a 65′ Blackface Deluxe or 68′ Silverface Deluxe. Oh, and a wooden bansuri flute. Essential is the TC Helicon G-XT for vocal doubling for my singing. Some songs wouldn’t sound right without it. 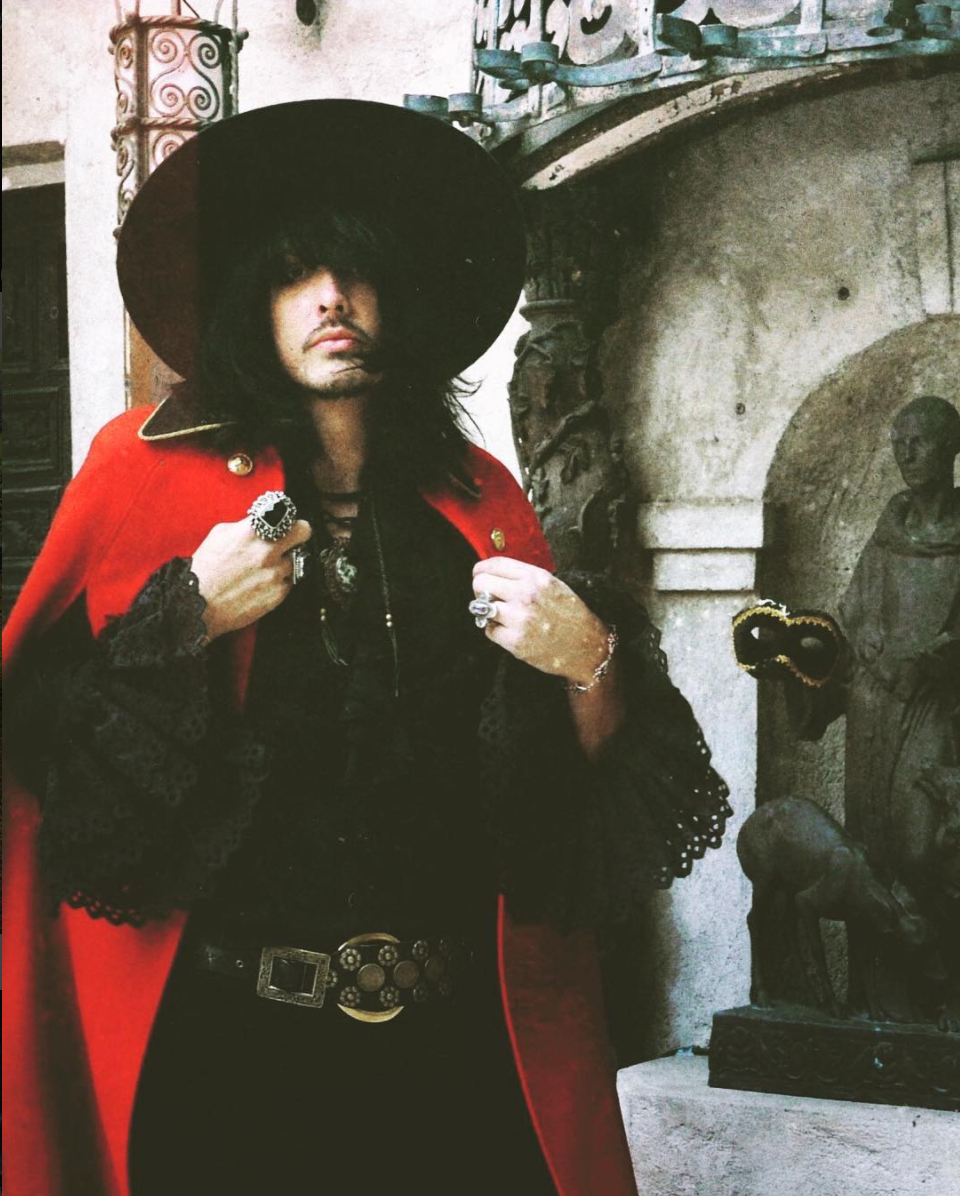 Is Los Angeles an inspiration for you? What is something you really love about the city or California? What do you do for fun when not in the studio or on tour?

Yes, I was born and raised in California, it’s just life to my perception.I’ve traveled to nice places in the world, but It’s the best here for many reasons. The weather, the food, people, lifestyle. I’m very Californian, I moved to NYC for a while and people thought me exotic in my ways.