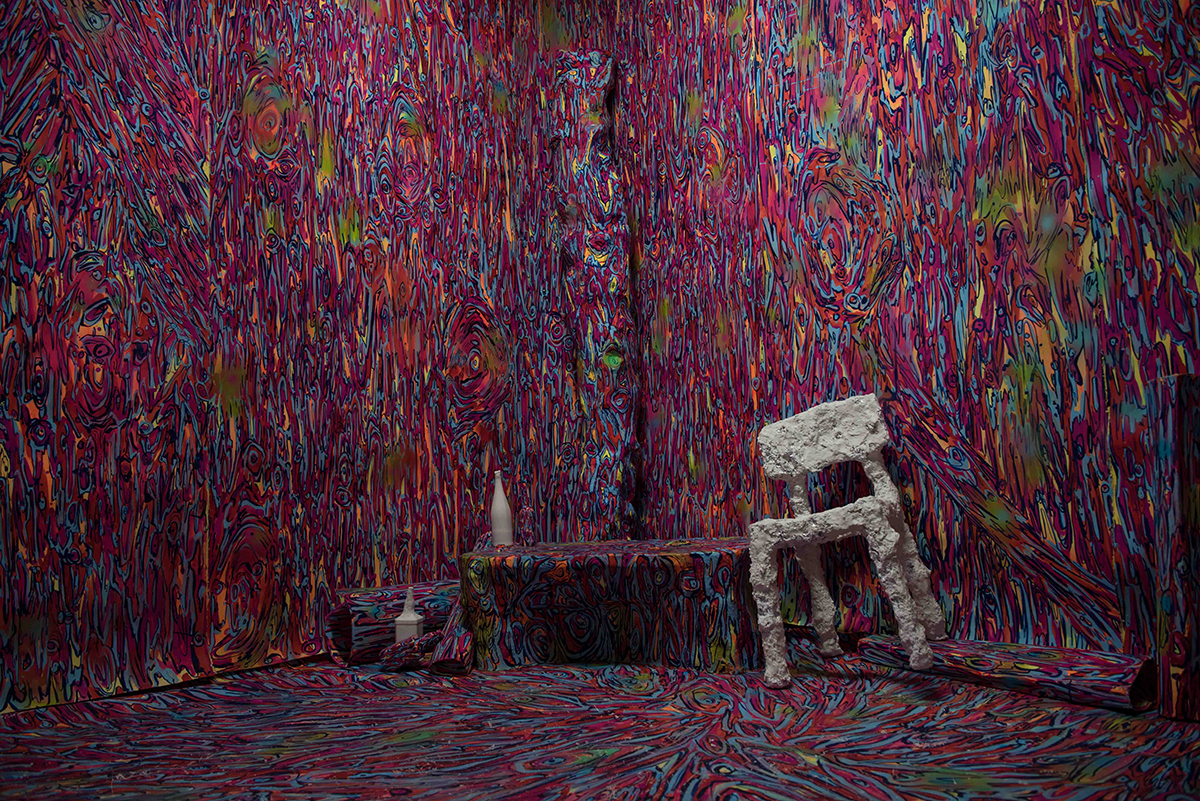 As you walk into 929 Broadway in Brooklyn, an eerie feeling sweeps over you. It’s nearly pitch black inside as I climb the sets of steep wooden stairs that couldn’t be any younger than the 19th century. Using the flashlight on my iPhone, I realize I’ve reached my destination: No Vacancy II the white wall in front of me reads. “Hello! Irina, Alison? Is anyone here?” The place is empty. I turn on the lights and am exposed to a hallway of open doors that houses the work of over 30 artists.

This is no ordinary exhibition – this is Alt + Esc … an “alternative escape.” And here lives its newest three-day weekend-only exhibition No Vacancy II, the second in its series and a hybrid between a gallery show, an art fair and a party. It features 12 rooms, each acting as its own exhibition space, with a diversity of artists and mediums. At 2 p.m. on a recent Sunday, it’s no wonder no one is here – the three-day pop-up had its opening that Friday at 7 p.m., followed by an after party hosted by musicians and artists that went into the wee hours of the morning. Saturday and Sunday had similar outcomes – from a panel talk to an album release party, the weekend’s events were dedicated to bringing people in the community together to celebrate art and the cultures that surround it. 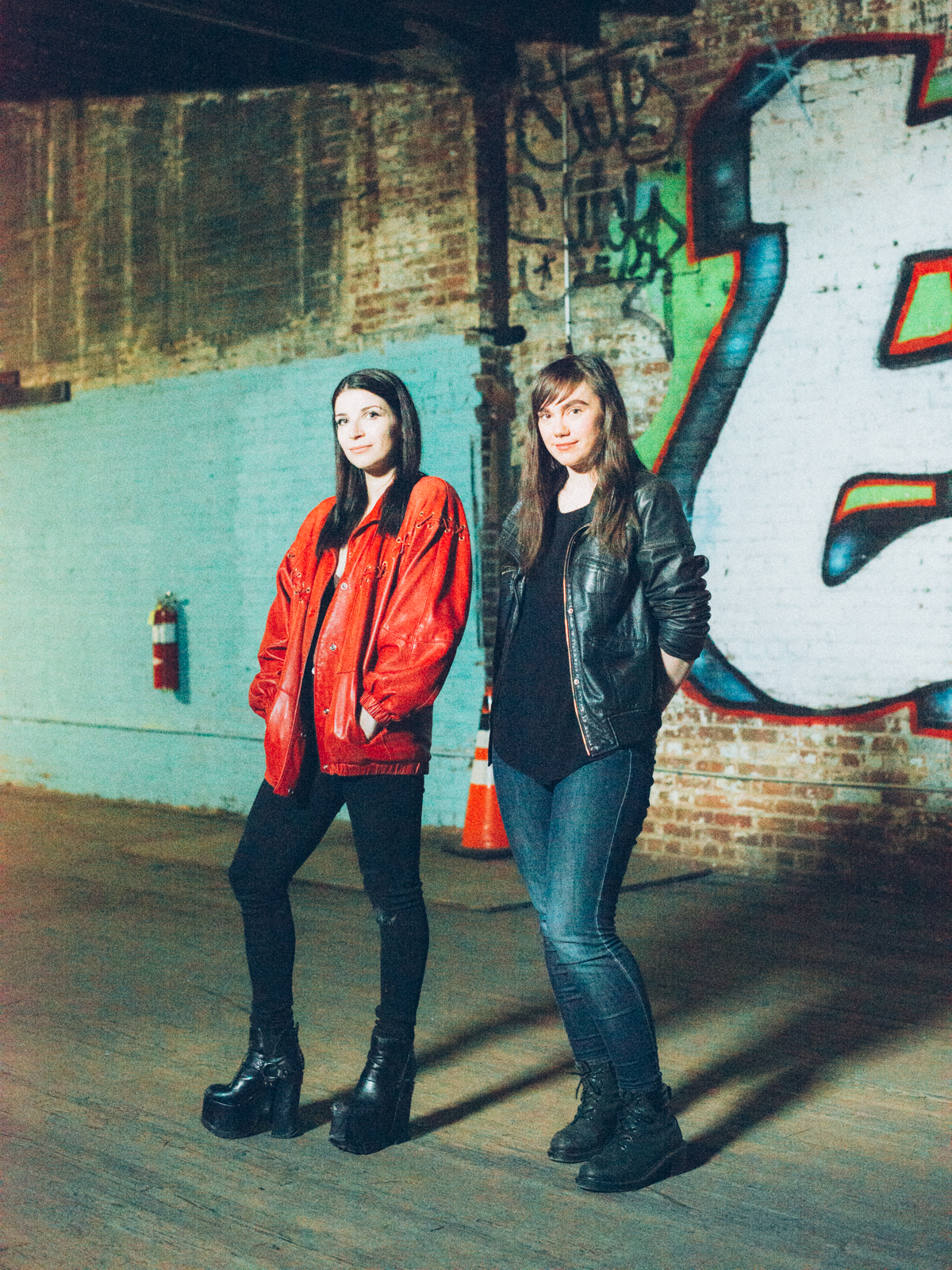 The brains behind the pop-up art show are Irina V. Makarova and Alison Sirico – the two women who founded Brooklyn-based Alt + Esc, a publication and curatorial team that bridges the gap between the art world’s many subcultures. After noticing the chasm between the traditional art world and the rise of up-and-coming artists, Irina and Alison launched Alt + Esc in May 2016 with the purpose of meeting new artists and providing them the opportunities to showcase their works in nontraditional settings.

How did Alt + Esc begin?

Irina: It started as Alison and I were getting out of long-term corporate positions. We met one day and we were like, “We should do a project together.”

Alison: Irina and I curated shows together in the past, and we wanted to pick it up again. We knew we had to go on studio visits to find out what people were making and to see what was going on. While we were going on the studio visits, we realized we should document them. It’s important to achieve these things. That is how the magazine started. There’s a real one on one relationship that the magazine holds to the curatorial project. It’s completely symbiotic. The narratives in the magazine inspire the exhibitions. The exhibitions inspire the artists we interview thereafter.

Irina: It definitely is like a curatorial and a publishing platform, but I think as it’s picking up steam it’s becoming more of a large-scale event-production platform too, which is cool – we like that. 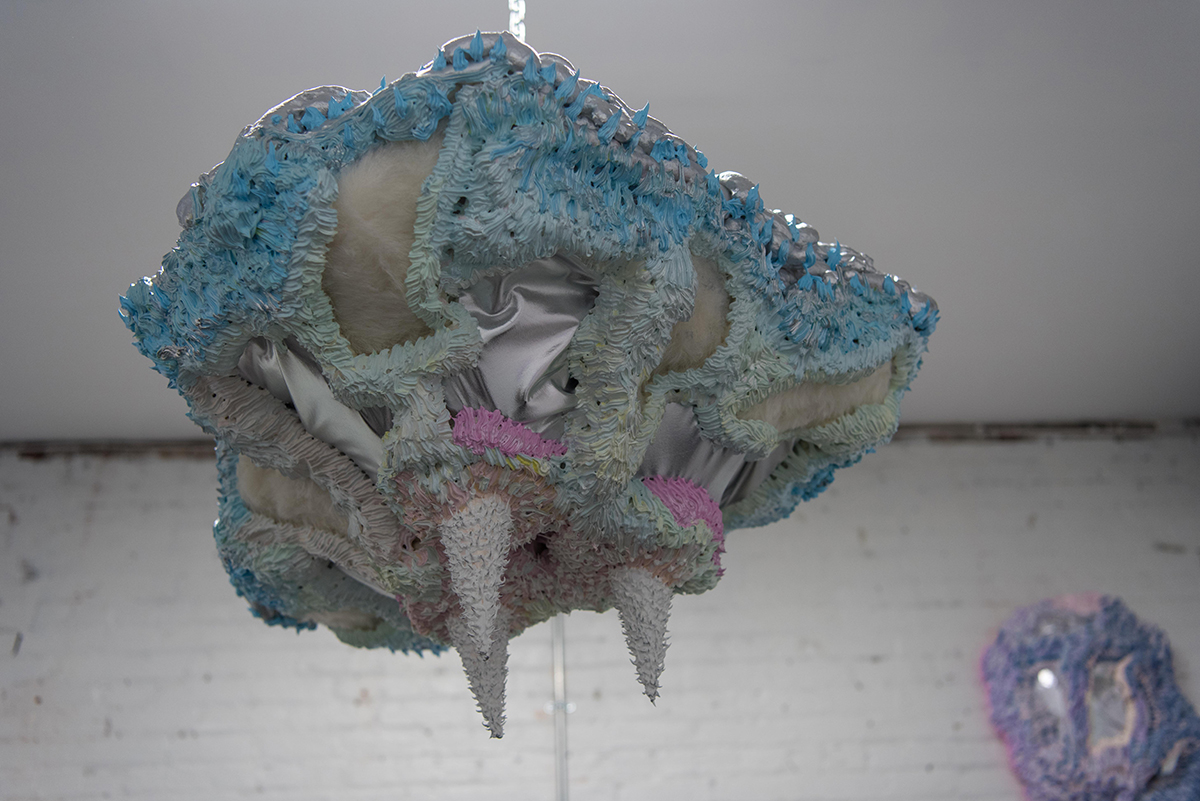 As an alternative to your typical art fair or gallery show, what were your goals for No Vacancy II?

Alison: The goal of the show was to showcase artists that we’ve been excited about, that we’ve met throughout our studio visits. Most of these people have become friends or friends of friends, so it’s about establishing more of a centered community. And, we want our artists to have a really good time at the opening.

Irina: And the panel and extra programming was really to support the exhibition, get as much foot traffic for it, and try to be as diverse as possible. So we have the party side, but we also have the more academic aspect as well. 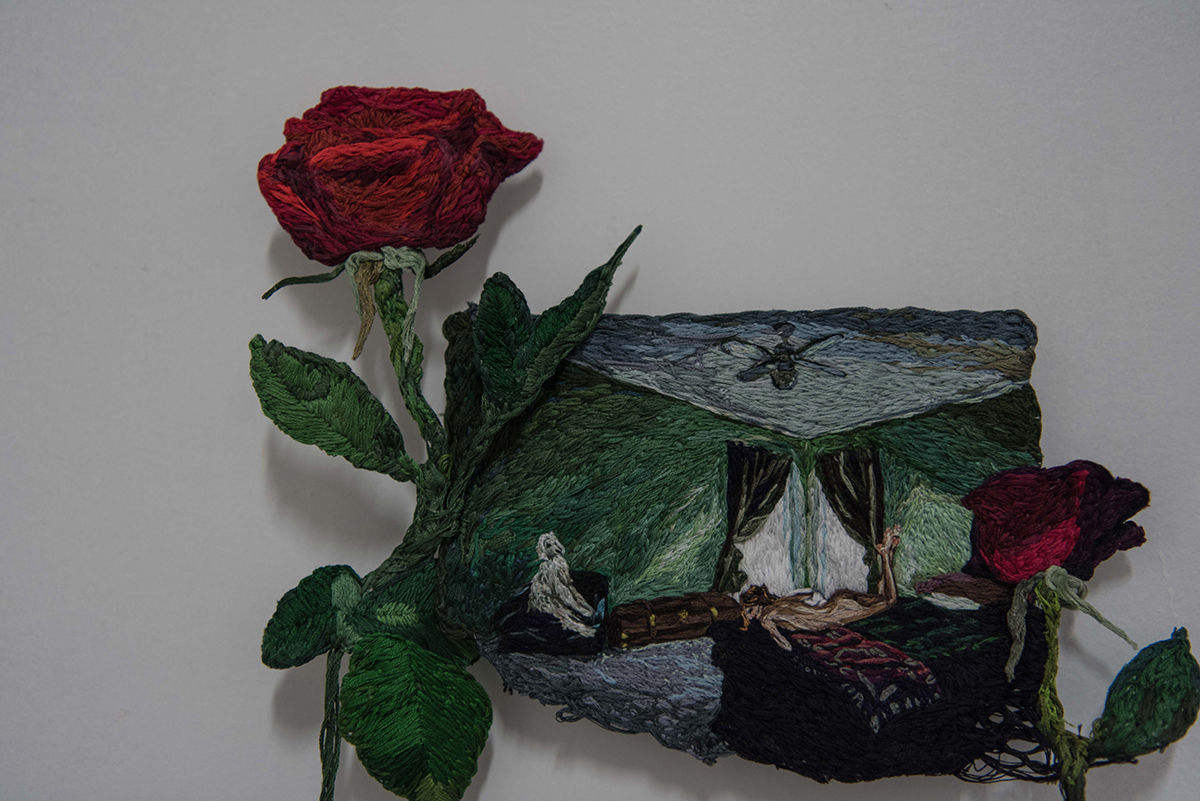 Why do you think it’s important to provide artists and the public this alternative form of exhibition?

Alison: It’s important because there are a lot of different art subcultural groups in New York – there’s the nightlife world and then there’s the fine arts world. And there are a lot of bridges and connections between the two but there aren’t many events that synthesize going out, music and art at the same time. We strive to bring the different creative groups together. 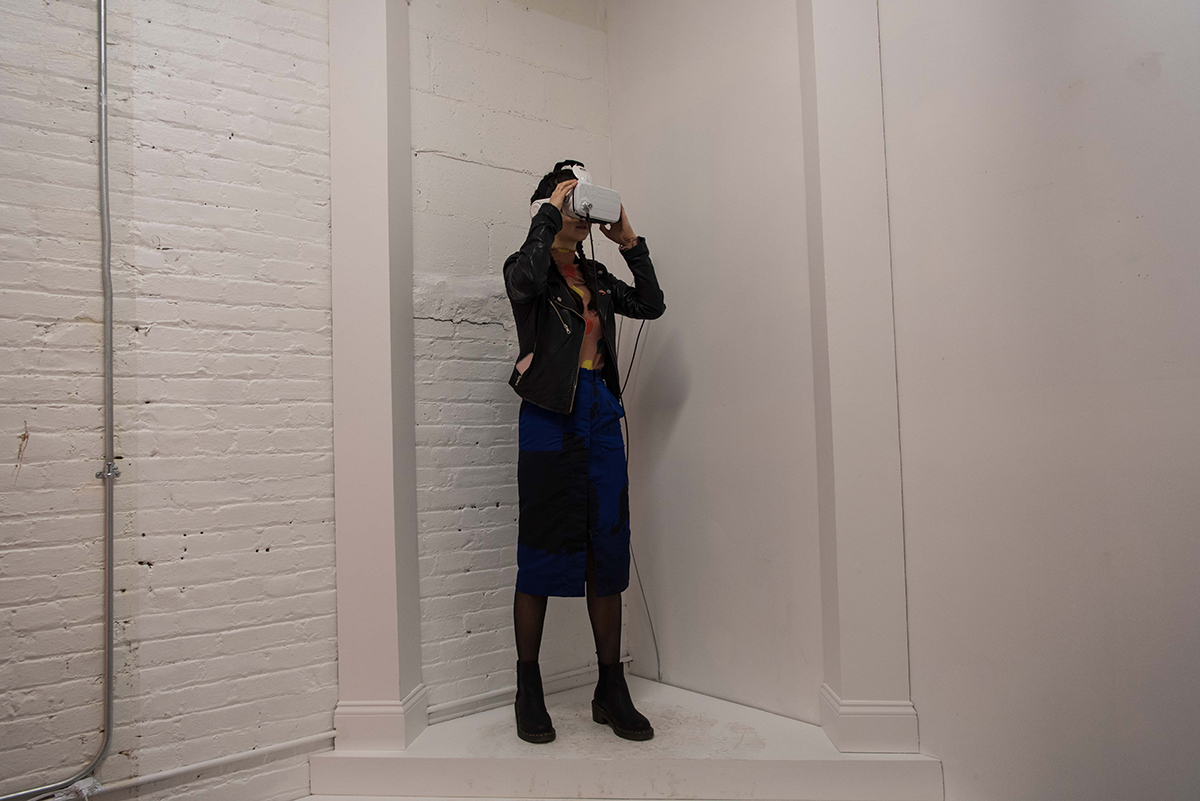 What was your creative process?

Irina: We approached it from a very serious curatorial goal – this wasn’t a group of artists all shoved together, these were mostly artists that we’ve worked with in our digital publication. And we treated each room in that space as a separate little exhibition room, so everything was thought through as thoroughly and creatively as possible.

Alison: It’s also important to note that we had a lot of help in this! Downstairs, we had three guest curators, Adam Mignanelli, Lydia Pettit, and Sarah Blazej, who brought in different artists they were excited about. Tiffany Nicole and I booked the music for the opening together. We had the boys from The Level Party throw the event Saturday night, and then Rebecca Fin Simonetti organized a party for her album release (ICE PIX) on Sunday. There were a lot of hands involved in the whole thing.

Was there a general theme throughout the show?

Alison: There wasn’t one overarching theme. We simply asked the artists we were excited about working with. We didn’t know what half of them were going to give us. We planned this all in a month and a half, so there was little time. The week before, we looked at all the work and were like “OK, so what narrative makes sense together?” And kind of just pieced it from there.

Irina: Yeah, it’s a very broad spectrum, like emerging and established artists. There are some artists who already have gallery representation, and then artists who don’t or who aren’t even looking.

Alison: But at the same time, I would say all of these people have roots in DIY culture – they came up through it or have been a part of it in some way. 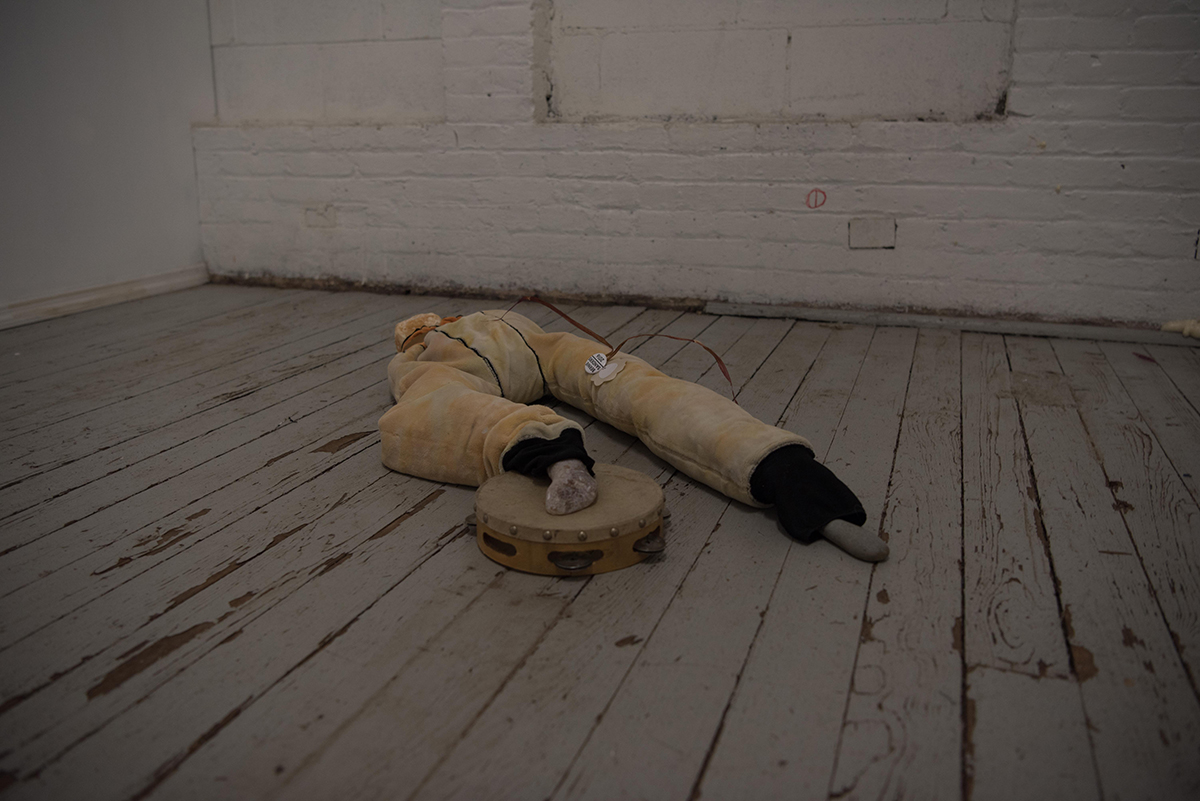 One afternoon, you had the panel discussion “Reconsidering the White Cube,” where Irina, you spoke, along with Adam Magnanelli of Ballast Projects and Brian Whiteley of Satellite Art Fair.  Why do you think artists and curators benefit from using non-traditional spaces?

Irina: First of all, it’s a way for them to relook at the white wall, white cube environment, and also challenge themselves by looking at things in a new way, a new light, a new perspective … Maybe even engage in new formats of art making and mediums.

Alison: Another thing about the white cube is (for some people) it’s kind of ostracizing. Sometimes people feel uncomfortable going into traditional gallery situations, whereas going to a party or a venue, or seeing work in a nontraditional space, it’s more inviting. There’s not this stigma that comes with “The Art World”. So in this way, a collection of people see the work that might not have otherwise.

What are your plans for the future?

Alison: We want to work in more interesting spaces. I think the main goal is to meet as many interesting artists as we can. That’s really what it’s all about – meeting and connecting people. It amazing. We started out with one group of friends, and then it spiraled from there.

Irina: People are asking us when No Vacancy III is happening and we’re like “Ah! We don’t know, let’s take this one down first.” But definitely more exhibitions – more large scale exhibitions.
Alison: Yeah, more large-scale exhibitions in weird spaces … Home Depot, Dunkin’ Donuts, McDonald’s, a mall … Anybody have a mall?

Rose Leadem
Rose Leadem a culture correspondent for FRONTRUNNER. She is the press director for Fergus McCaffrey gallery in New York, Tokyo and St. Barth's. Leadem is a freelance writer for various outlets including Entrepreneur, Homepolish, Resource and more. She is based in New York.