There She Is, a documentary film by our friends Veena Rao and Emily Sheskin, journeys inside the world of pageants.   The film follows Allison Kopach and Jenny Flores – not your typical pageant queens. They love makeup, fashion, and anything that sparkles. However, unlike Miss America, at a size 22 the only doors open to them are in the plus size pageant world.  There She Is follows the two women as they prepare for and compete in the 2011 American Beauties Plus Pageant and revisits them in 2012 to reflect on the outcome of the pageant and what has changed in their lives.    Below is an interview we did last week with Veena Rao and Emily Sheskin after a successful Kickstarter drive to raise the finishing funds for the film.  You can preorder the film by e-mailing them directly.  Expect to see this at festivals!

How did you find the subjects (Alison and Jenny) in There She Is?
We became really interested in pageants because they are a traditional expression of beauty and have a historical basis in the U.S. Around the same time, we came across the statistic that the average American woman now wears a size 14. So we wondered, we’ve heard of Miss America, but are there pageants that include the average American woman? We found out that there are numerous plus size pageants that invite women size 14 and above to compete.

From there we started talking to contestants across the country and finally met our characters, Allison and Jenny, who impressed us with their willingness to be open about their experiences as plus size women and pageant queens.

What was the most challenging part of the production?
The most challenging element of the filmmaking process was coming to terms with the fact that the footage we ended up with was different from what we originally thought we were going to get. Consequently the film we envisioned was not there and we had to create a different one with the material we had. We had to step back and realize that part of the magic of documentary is its unpredictability and had to commit ourselves to making the best film possible.

We kept in touch with Allison and Jenny and after hearing about changes in their lives after the pageant, we decided our film was not done and that we needed to go back to the pageant in 2012 and follow up with our characters one year later. We filmed again at the pageant in April and spent this summer re-editing the film.

What are some of the messages about beauty that you would like to question and impart on the audience?
How we define beauty and what influences this definition interested us and we wanted to make a film that explores an unorthodox version of beauty, which is what drew us to plus size pageantry.

We discovered that what was most compelling is the conflict between our characters’ desire to celebrate their beauty while at the same time never having their physical appearance accepted outside of the plus size pageantry world. Their inner conflict is in many ways universal, and extends to everyone who faces a discrepancy between their self-image and the influential yet unattainable images surrounding them.

How were you personally inspired to make this film?
When we first met Allison she said something that really stuck with us. In talking about her experiences as a plus size woman she said, “Nobody knows they’re not perfect until someone tells them that they’re not.”

We both really related to this since we both had at times felt that we didn’t fit into the images of beauty around us. Emily and I started talking about our experiences and wanted to explore this idea in a film. We wanted to create something that would pose the question, “Why is the standard of beauty in this country so different than the average American woman? Is it possible for people to think about beauty in a more inclusive way?”

What is the release schedule for the film?  What are your goals for the upcoming year?
We plan to finish post-production at the end of November. We will then be submitting to multiple festivals as well seeking broadcast opportunities. Our main goal is to get There She Is to as wide of an audience as possible. 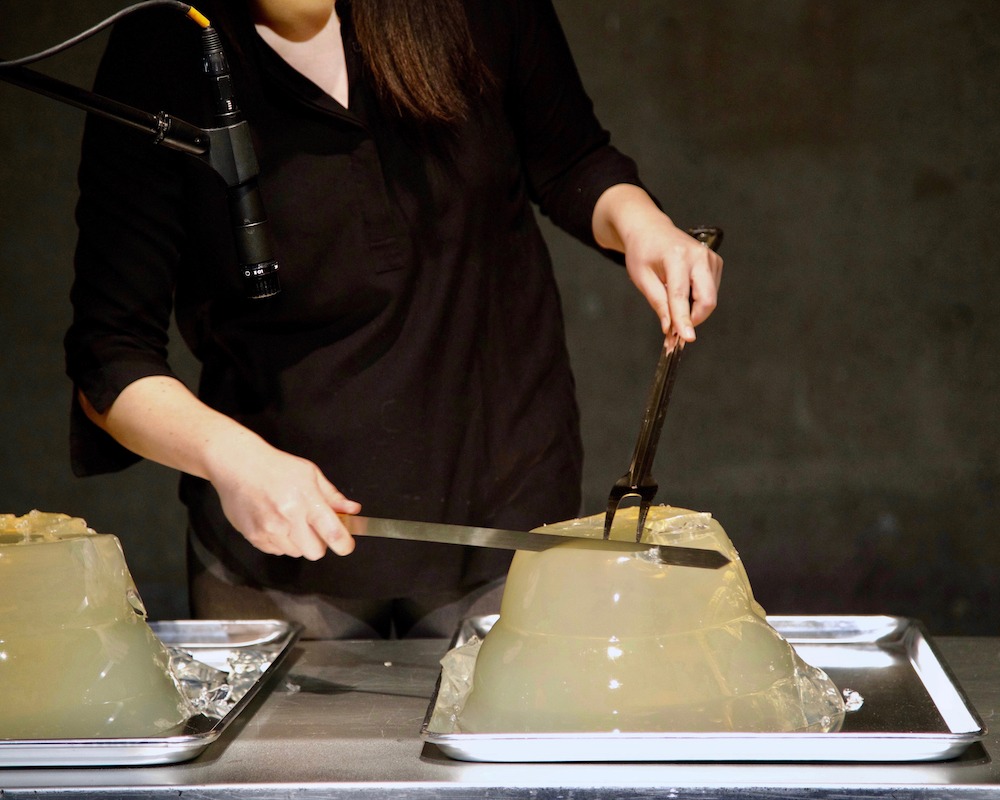 Alison Kuo’s artworks examine power and class dynamics through the language of food. Her participatory performances invite her audience to collaborate, and to eat, within the framework of an installation.

Cancel reply
There She Is - a documentary film preview