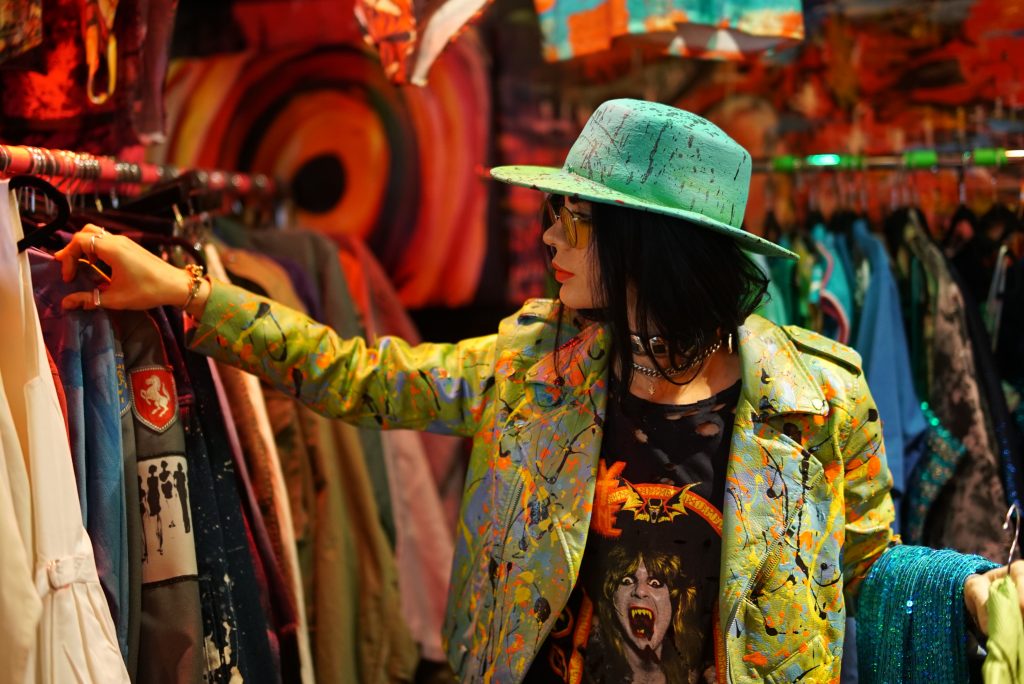 When Storm Ritter invites you to her public studio/storefront Storm Ritter Studio on 8th St, you feel as if you’ve entered a psychedelic dream world. Within an instant, you become enthralled by a storm of captivating colors and electrifying paint designs. An artist first and foremost, the painted walls–which she is able to paint using both hands–are essentially her canvas. Storm identifies herself as being a creative curator above all else; her role as designer comes secondary. You can follow her on instagram @stormritter and @stormritterstudio, as well as shop and learn on her website www.stormritter.com. As known, to really make it in the fashion world, having that well-rounded “artiste” spirit is essential, and Storm is the embodiment of the free-spirited art punk bohemian celestial icon–soon to be the art scene’s most prominent trend-setter. Additionally, she is an activist, designing clothing and creating artwork that helps to promote the co-naming of 8th Street as Jimi Hendrix Way (jimihendrixway.com), an important tribute to the venerated musician who founded Electric Lady Studios in 1968. 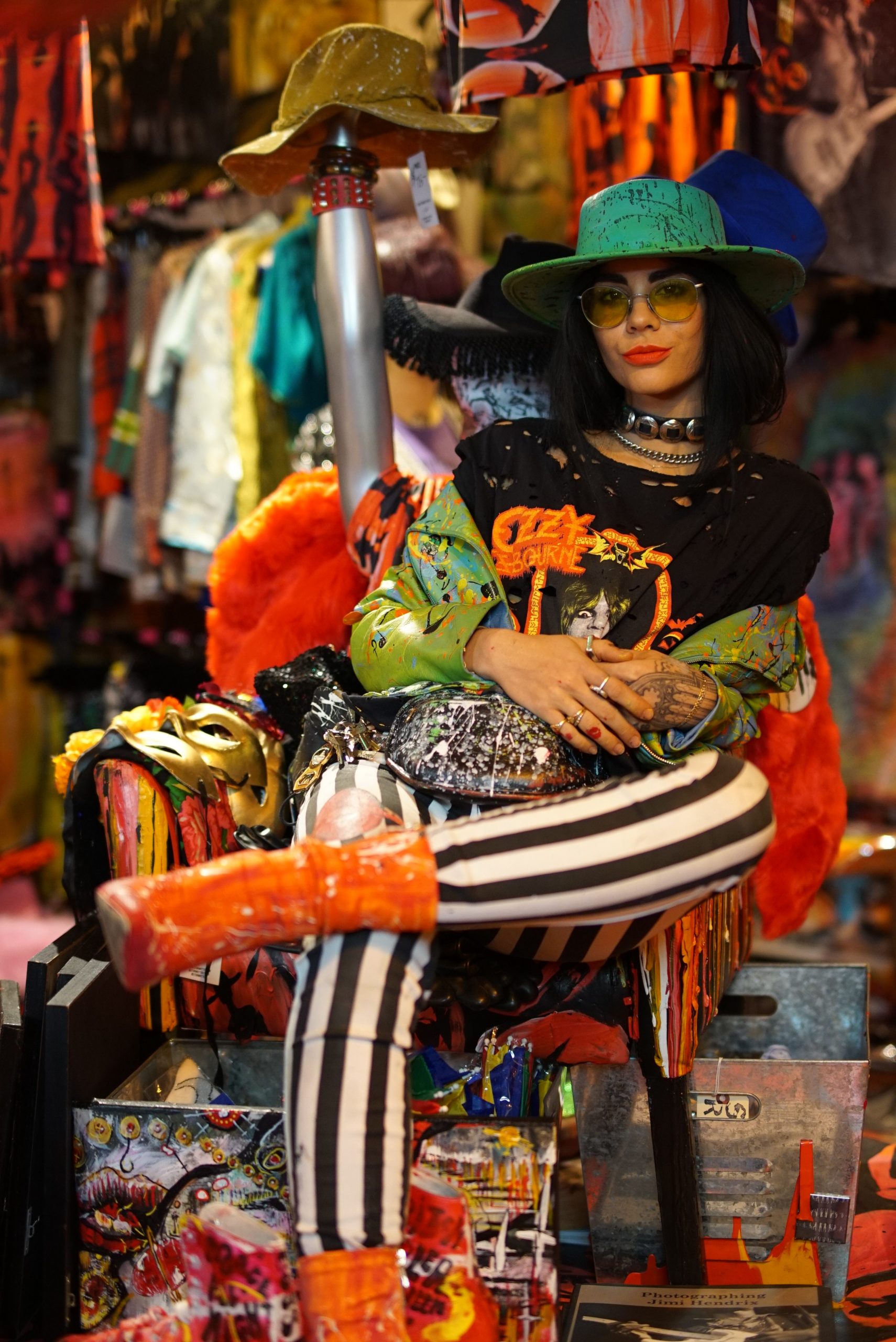 What was the development process of really discovering yourself as an artist? Did you have a creative background at a young age?

Cultivated by hippie parents, I was absorbed in mixing business and creative production, from working events to building visuals – art came naturally. In my formative years, I pursued costume and set design, and then that’s when I realized I wanted to do something on a larger scale. The many years I spent living alone with my cat allowed me to focus on what was important to me which inevitably helped me to develop my point of view and talents as an artist. While I was working full-time and going to school, the time I spent alone was concentrated on expanding my sketchbook and developing my technique. I was able to start to think outside the box in terms of my fusion of fashion and art, developing my skill set, and eventually combining the translation of color and concepts onto textile. 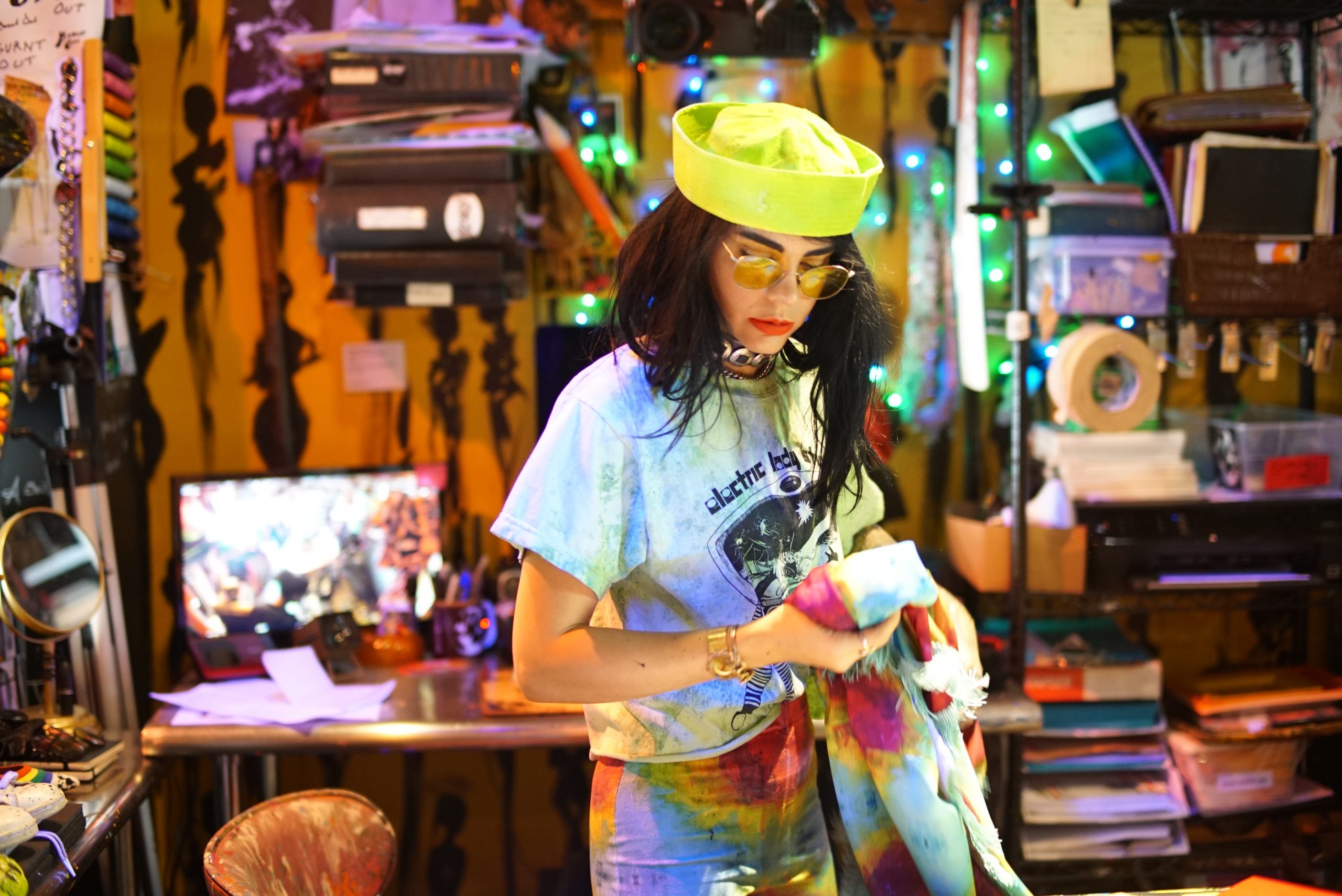 What is the driving force that compels you to express yourself creatively?

I wear many hats. As an artist, painter, fashion designer and curator of fashion, the most important thing that keeps me going is my strong work ethic that has been embedded in me as a child. Everyday I feel as if I need to be working to full capacity and be on my A game in order to really feel creatively fulfilled.

Tell me about your background as an artist and curator.

I spent my personal time immersed in studying and reading about different styles of art to really develop my own style. I was inspired by different periods like Expressionism, Absurdism, French Impressionism, Surrealism, Dada etc. allowing me to build a vast intellectual foundation. With that I started focusing on set and costume design which led me to eventually do television. I worked at Saturday Night Live in the costume department. I also have a background working as an assistant stylist for various fashion magazine spanning from Rush magazine to Vogue. The time I spent alone really allowed me to put together all these concepts on a larger scale, that really helped me to create a stronger point of view as an artist which then turned into curation. For me curating is an art form. It’s a way of combining together environment, people and the overall intention of a space to tell a story and to also share that story with other people so they can join in. 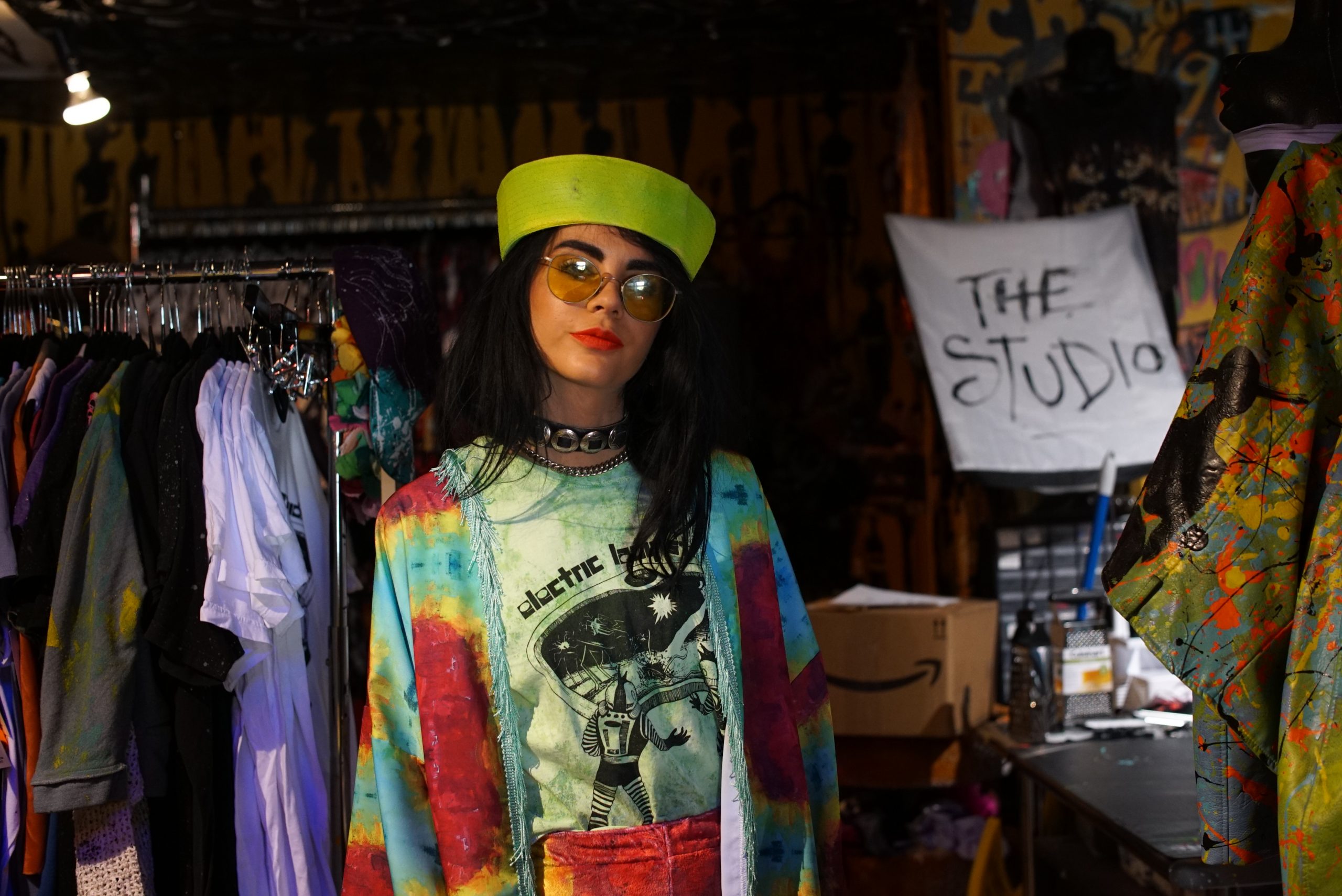 How would you define your style both as an artist and fashion wise?

My style is very natural. I very rarely look at myself in the mirror in the morning. The majority of my clothes are essentially work clothes and work clothes for me are the clothing I paint in. Despite what I’m doing during the day, I usually do some sort of painting whether it be splatter painting, or “The Cool People” which is the motif I use in the majority of my textiles. So the clothing becomes art. Everything I’m wearing is printed or painted based on something I’ve painted or drawn, therefore my aesthetic is essentially wearable art. I’m influenced by sixties and seventies pop culture so my style is very really retro. It’s very vintage without it being vintage. I’m also a surrealist at heart. I’m very much an Absurdist, it’s very juxtaposed, it’s bold, it’s loud. I’m very much a surrealist, so it’s a surrealist way of dressing. An artist actually wearing their art 24/7 is pretty surreal.

What are some words of advice you’d impart on aspiring artists?

Spend a lot of time by yourself, learning what you like to do, and also challenge yourself. When you go to art school, they put limitations on what you can do. For instance “this is what you’re going to do, and this is what you’re going to research.” If you have a passion for something, a certain style, or a different way of expressing yourself, trust your instinctive intuition. And go the to library, look at art books, and do your own kind of research. Don’t just use Google. Once you develop a strong viewpoint, then you’re really going to be able to convey a stronger individuality and authenticity that is harder to get than just copying other people. 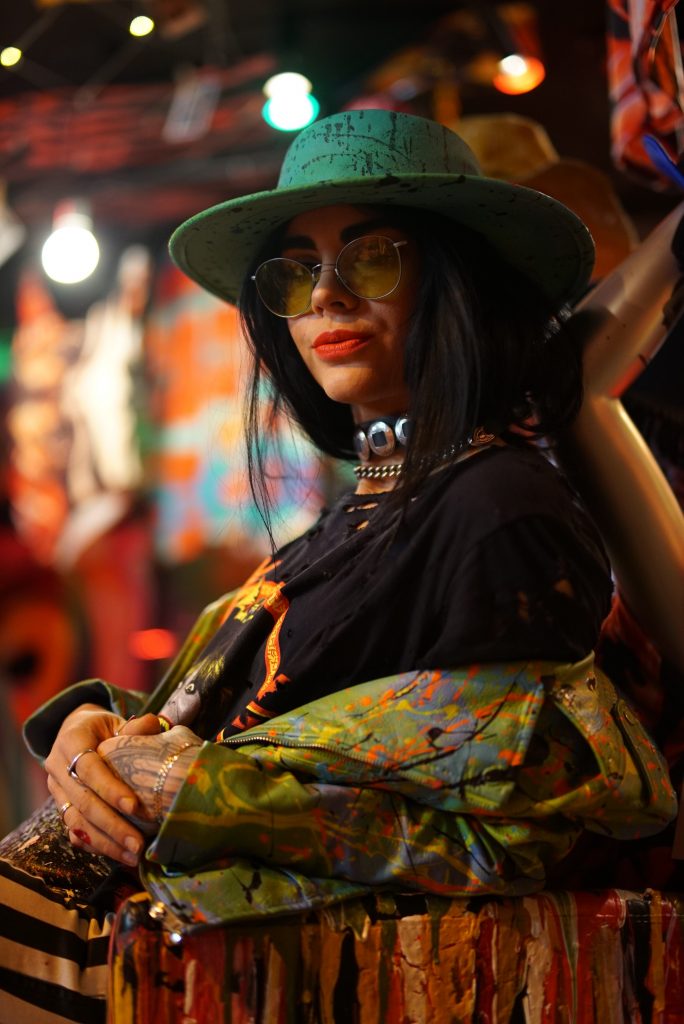 Can you explain further your movement to co-name 8th Street Jimi Hendrix Way?

8th Street is an amazing street. It has an expansive history that is unknown to many of its pedestrians. Adjacent to my storefront is Electric Lady Studios which was founded in 1968 by Jimi Hendrix. So many of my shoppers reminisce about the street, and I felt that his legacy and the Studios should be better known-also increasing the vibe of the street. So I had a sign printed. Let’s call it “Hendrix Way”. Electric Lady Studios reached out to me and really liked my idea so I spoke to them, I spoke to the merchants on my block and I built a team and threw together a launch party. Then we started an online petition physically in shop and online www.JimiHendrixway.com. It started to grow bigger and we started getting fantastic press. The New York Times, and CBS covered it, and recently we were on the radio. Right now, I’m working with other establishments like Uncle Sam’s Army Navy and Morrison Hotel Gallery where we will be doing an event in November celebrating Jimi Hendrix, talking about the petition and showcasing some photographs. What’s also really cool is that my shop is bringing in really rad people – some who have been living here forever, some who have photographed Hendrix, or some just stopping into bring posters and stories So it’s kind of reviving a little bit of that Rock and Roll history. We also have Jimi Hendrix tee shirts downstairs with the logo I made for the present movement. Proceeds go to Hendrix Park in Seattle. It’s had a really positive effect on the community as a whole.

So you were really an innovator in this restoration.

Yes. Initially, I was the one who made the sign, put it in the window and did the press for it. I worked with a handful of other people like Richard Geist of Uncle Sam’s across the street or Rob Key who is the resident at the Jimi Hendrix cottage. I’m now good friends with Lee Foster who’s the general manager at Electric Lady Studios. So I’ve been able to really connect with some fantastic people, a very eccentric group. I’m very much into always having a cause, it’s very important not only as a person, but as an artist to have some sort of an association with something positive, giving back. I feel like this is the best way to start a domino effect in Greenwich Village. You really could add different areas of commemoration throughout the whole neighborhood, from rock and roll, fashion, food, art and it needs to be known. Especially for NYU students. There are so many students around who have no clue what has happened here and it’s important to teach.

How did your motif of the “Cool People” come about and what does it mean?

When I was in art school, I was doing a lot of classical art, meaning figure drawing, and I started to get frustrated with the protocol of doing everything by the book. When I started experimenting using both my left and right hand to paint, that’s when I started to discover my voice. For me, the right hand is more structural, and the left is more expressive of emotion. “The Cool People” was birthed from there. “The Cool People” are not all the same: some have holes in their chest showing an unfulfilled quality, some have a line or halo through their heads, giving them a divine essence. Many people call them hats, which is serendipitous because I’m always wearing different hats. And that’s what it means to be cool, wearing many different hats to express yourself and your individuality.

Well you are the coolest person.

Thank you. Cool comes from within. A lot of people try to be cool on the outside and don’t realize that coolness begins with the “spirit” and soul. Now, Storm Ritter Studio is the House of Cool People.

Alexa Modugno is an accomplished classically trained violist, performance artist, fashionista, social media guru and writer who is passionate about NYC, culture, film and the arts.