Looking at the unassuming façade of the bodega at 120 Grattan Street in Bushwick, no passerby would suspect that behind the counter and down a secret hatch across from a display of snacks lies a basement filled with art. However last Saturday, those brave enough to descend the steep stairs encountered the sixth installment of Ryobi Room, a one-night pop-up art exhibition organized by Philip H. Ashley, Ruben Hernandez and B. Thom Stevenson. Initially founded by the three Brooklyn-based artists and Coley Brown in the summer of 2014 in order to show their own work, Ryobi Room continues to bring a diverse group of artists to a space typically used by the bodega staff and their friends for playing pool, gambling and entertaining.

Visiting the bodega space days before Ryobi Room 6, which still contained painted ceiling tiles by Brendan Lynch from Ryobi Room 5, we spoke with Ashley, Hernandez and Stevenson about the motivation behind Ryobi Room, their approach to curating in a bodega and the importance of community for artists.

What led you to start Ryobi Room?

Philip H. Ashley: We were just looking for a venue to show work because we didn’t have any at the time.

B. Thom Stevenson: I used to have a studio over on Melrose Avenue a little bit away from here. I was checking out the dog food at a bodega, which no one bought dog food there. It was overpriced, but I was buying it there one day for whatever reason. I have two dogs. I looked through this door that was open a crack and there was this green room. It was a green that you would not paint a room like the Ryobi tool color. I tried to ask this guy about it but he didn’t speak English. Ruben was around the corner. Ruben and I were talking to him really loosely about this idea. Nothing had been set up, but we knew we wanted to do something in the space. Ruben asked if we could see it because I had just peeked and didn’t actually get back there. Ruben got us back there. It was this room with two pool tables, purple carpet and green walls.

Ruben Hernandez: It was funny because when B. Thom came up with the idea. I was like, “Is this going to work?” I thought they would be like, “No, this is our space.” They ended up being really nice guys, letting me go back there to take photos. In general, they thought the art was beautiful. They didn’t really know what we were going to do, which was awesome because we had that leverage to do whatever we wanted to.

BTS: There are so many artists in Brooklyn that you don’t always have the opportunity to show what you want where or how you want it.

RH: B. Thom, Phil and a few of our friends weren’t really showing that much at the time. It was cool to do it in a different area rather than white walls and a basic gallery. Going through the bodega and walking through the groceries to see this room.

PA: It filled a void.

The current space of the Ryobi Room that we’re sitting in is actually the second space. You had to move because the initial bodega turned their backroom into an organic section. How did you find this specific space at 120 Grattan?

RH: I thought because the other one was through a door and in the back, that there would be a room in the back. They have cameras in here so you can see the video at the counter. I saw the lady who cooks and a lot of guys downstairs–I don’t know if they were workers here or people who were playing. They were holding hands and praying around the table. I was like, “Oh shit!” I told B. Thom, “I think there’s another one over there.” Months went by and we came to get beer or something. B. Thom asked to use the bathroom not knowing where it was. He opened the secret hatch, then came down here. When he came upstairs and walked out, he said, “Dude, there’s another room here.” It worked out really well. There was a little time where we were wondering where we could do it. We were looking for the same Ryobi green color.

BTS: For whatever reason, every bodega–some part of their space–is that green. It’s such a common color, but when we got this space, it was this dark maroon color.

We rent the space for the night–we’re not doing it for the money. We don’t take cuts from the artists. The idea is it’s an art project we’re doing. It’s a conceptual execution of an idea. That’s another reason we called it Ryobi Room–the green color, but also Ryobi is this low-end drill.

RH: Everyone’s got one.

BTS: It’s the idea of being able to do something even before you’re able to be considered an emerging artist.

Do you see it as a part of the burgeoning D-I-Y pop-up gallery scene in Bushwick that has emerged in the past couple years, primarily in apartments or studios?

BTS: I think they’re all great. I think it’s a good thing to do. I hope it’s encouraging for others to do similar things. Being able to bring art into a non-art space is really exciting for a lot of people to experience and be a part of.

PA: It’s liberating I think because we don’t have to go through the actual gallery people. We’re curating ourselves. It opened doors for us to just curate and bring whoever we wanted to.

RH: It becomes our space and it’s cool to have that. We show a lot of our friends’ work and mostly our favorite artists too.

PA: I think she saw the past ones and thought it would be good to do. It’s nice to mix that stature with people who haven’t really shown that much. It works out nicely.

Related to the mix of artists, curating a show in a room of a bodega has to present different challenges than a traditional gallery space. How do you approach Ryobi Room’s curation?

BTS: I think it’s different than a white-walled gallery. I feel like this is more real. Ideally, we’re putting artwork together that we enjoy and we’d want to live with.

PA: There’s a Brendan Lynch ceiling title right here. [points up] He left it in the space from the last show. That’s a project he was doing–leaving paintings around bodegas. Their work fits in the actual space in a different way than it completely stands out in a gallery setting. This setting is part of a larger installation.

BTS: It goes back to the idea of salons people would have in the beginning, even before galleries came into style. We have this thing where we bring our friends and they bring their friends. It feels like a club.

PA: It opens up a community that wasn’t really there. It’s a meeting place. The show is short so it’s not like we’re doing huge crazy pieces–people can experiment.

BTS: I think the curatorial process is freer too. We see a piece someone posts on their Instagram and we’re like, “Hey, would you want to put that in the show?”

PA: The artist has a little more control, which artists don’t usually get to do.

BTS: For me, this has acted as a sounding board. Showing your work and having a way to put it out there on your own terms helps you grow. We started this a year and a half ago, showing our own work. My work has grown so much.

That’s an interesting point. Do you all feel like your own work has grown through this project?

PA: We’re able to curate groups of artists that aren’t usually together. It starts a dialogue and you grow from that.

I also wanted to talk about community-building and collaboration, which doesn’t seem to happen as often as it should in the art world. Even in this interview, I initially reached out to B. Thom and he offered to bring in two other artists. That has never happened before. What drives you to create this community between artists?

BTS: It’s crazy, right? For artists, our most valuable asset is other artists. That’s the thing that happened so much in that romantic time of the arts in New York in the late 1970s and 1980s. Those artists were going out to the bar together. They were friends and were helping each other out.

PA: Less individual corporate interests. It’s strange how it works that way now. The individual seems to be perpetuating themselves completely on their own.

BTS: A lot of people seem to feel like if another artist is good it makes them less good, which is not the case. I feel like with a lot of the artists we work with, that’s not their idea. It might be perpetuated by the galleries, which is really frustrating. Hopefully, we’re helping that. We’ve seen this idea go other places. Like you were saying, it was already happening before us and it’s happening after. It’s a good thing. We’re taking power back for ourselves.

Name an art form, and Milorad Krstic will have studied and mastered it. He is a Slovenian painter, film director, visual artist, sculptor, author, illustrator,… 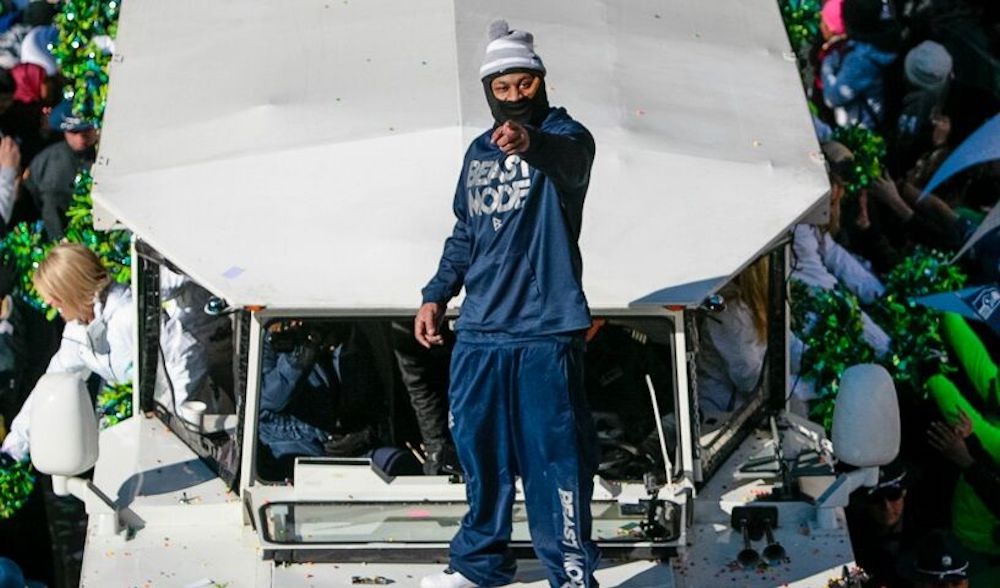 Marshawn Lynch, the twice-retired running back who played for the Oakland Raiders, spent his time in the NFL pissing off fans and press alike for his reluctance to participate in the media attention naturally visited on celebrity players.