You may remember Nicolas Holiber’s monumental fallen Goliath Head in Tribeca Park, NYC in 2015.  Now, Holiber has taken on an even more ambitious Public Sculpture project with the Broadway Mall Association and the NYC Audubon Society.  Ten massive birds were installed last week between 64th to 157th St. Each New York City bird is in danger of extinction due to threats caused by climate change.  The ten bird species were chosen from the Birds and Climate Change Report, released in 2014 by the National Audubon Society.  This study warned that half of all North American bird species will be imperilled over the coming decades due to shifting and contracting habitat zones resulting from climate change. Holiber honors 10 of the 145 threatened species that reside in or migrate through New York in his large sculptures constructed with scrap wood found in the city. Each bird’s unique character is animated through his gestural skeletal design and use of wood as structural paint strokes.  FRONTRUNNER chatted with Holiber after a year of watching his focus and hard work building these birds.

You’re a native New Yorker, what has been your relationship with some of the native birds your representing in your project?  Which one do you identify with the most?

To be honest, before this project I didn’t think much about NYC’s native birds, apart from the peregrine falcon making a comeback in the city or the snowy owl that has been seen in recent years. As I worked on the sculptures I started to notice and pay more attention to the bird life around me. I got to see a few of the birds in the wild at the same time I was building them which made for an interesting ‘art imitating life’ scenario. I’m not sure that I identify with any particular one of the birds, but I do favor the double-crested cormorant. They’re colonial water birds, so they’re always in groups and when they’re not hunting, they spend their time resting or sunbathing, that would be a pretty nice life.

When I came by your studio, you were halfway through the build; it was a pretty raw warehouse space.  Can you talk about the experience of working out in an abandoned space in Flatbush, with minimal utilities?

Throughout the year I occupied 2 different workspaces for the project. First in Flatbush, Brooklyn and later in Long Island City, Queens. My studio assistant, Bishop McIndoe worked with me 1-2 days a week and my dog Vito was with me almost every day. It was definitely a change from my normal studio experience. It came with a lot of advantages, like space for example. In the past I never had a studio that was more than a couple hundred square feet and all of a sudden, I had close to 10,000 to work in, it was amazing.

There were a lot of challenges, since both buildings were going to be demolished later on, there was little electricity, no heat or a/c, and I was often dealing with heavy leaks and other problematic conditions. It made working in the summer and winter really difficult and was very isolating at times. Vito loved it though, he got to run around the entire warehouse and I’d catch him sleeping inside the sculptures. I did enjoy it too, and having a place that large with the freedom to do whatever I wanted was a once-in-a-lifetime experience.

What were your considerations in construction?  What was the most challenging aspect of this project?

I really tried to capture the essence and attitude of each bird that I was building, rather than focusing on anatomical accuracy. Each species has its own unique characteristics so the design and build process was a lot of fun. I wanted to make them as light as possible to make moving/installing a little easier, so all of the sculptures are hollow with weight added internally for the exhibition.

The builds were done in two phases; first, I built all 10 of the ‘skeletons’ which was just a rough construction of raw wood to get the overall form of the bird. After that, the painted wooden feathers were applied and more of the detail came about. Each sculpture is built in pieces so that it could fit through our entryway which was a garage door 8ft wide by 7ft tall – this changed when I moved to the warehouse in LIC but all of the skeletons had been built by that point. I think the most challenging part of the project was the amount of time I had to create the work, which was less than 12 months. It meant that this project was the only thing I could work on for the entire year. I stayed focused and set daily goals for myself, taking it day by day, I was able to meet the deadline.

Over a year, you build a structure that is covered with broken, carved, cut pieces of reclaimed wood that is an interlacing abstraction of the bird. The wood is malleable through the acts of creation and destruction to build the forms, feathers, and textural details. What are the values or priorities of your aesthetic?

I really enjoy working with the material in this way. Wood is amazing for its strength and flexibility and it’s incredibly forgiving. I value the straight lines and edges and its ability to bend and twist. I tried to incorporate these attributes as much as I could in the designs and take advantage of how the wood naturally behaves rather than transform it to look like something else. The wood being reclaimed, it isn’t polished and already has a history written into it and I wanted to be sure that was apparent when the sculptures were completed. It’s also a great connection to the underlying message of the exhibition, which is to highlight the effects that climate change has on these bird populations.

If the sculptures were made in a different medium, bronze or ceramic for example, I don’t think it would have the same effect.

Do these sculptural birds have more vitality because of their ephemerality? Does the weathering materiality of the sculptures relate to how the birds themselves that are endangered or threatened.

Yes, that was priority number one when creating this exhibition. Because the wood is untreated, it will change and weather while the sculptures are outdoors. NYC’s climate effecting these sculptures is a direct link to the overall message of how climate change is jeopardizing this group of birds. It also turns the exhibition into its own living, breathing thing. As the sculptures go through three different seasons in the city, they’ll transform and develop a patina from the environment, and I think there’s something beautiful about that.

What have you taken from this project that may influence your next personal sculptures and paintings?

Material has always been very important in my work and moving forward I will continue to focus on the material capabilities of what I’m doing. I’m starting to experiment with concrete and I’m really enjoying that. I’m not sure if animals will make their way into my personal sculptures and paintings, but ephemerality and an emotional connection have always been strong themes in my work. 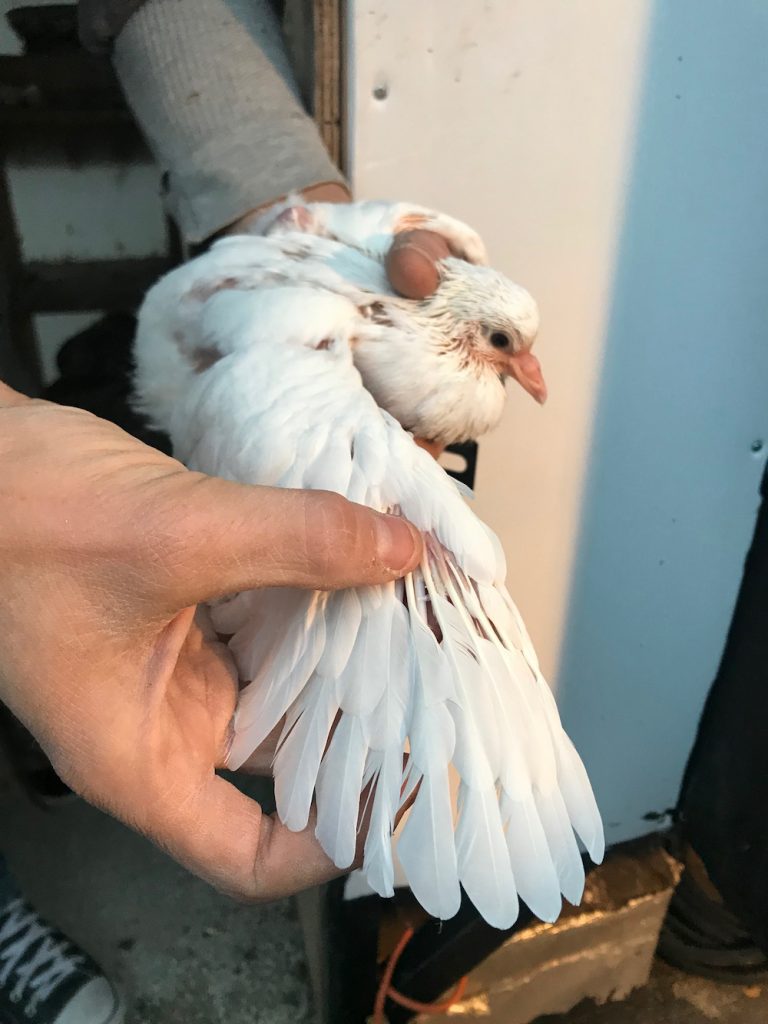