What does it mean to exist in a time and place? To belong to it? On a brisk winter’s day, Brooklyn-based artist Naima Green met me in Manhattan to ponder this and other questions. Best known for her photographic portraits, Green has a patient, thoughtful energy that belies a quietly radical and kaleidoscopic vision. Last summer, her series of portraits Jewels from the Hinterland, which presented black and brown artists and creatives in public green spaces, were exhibited to acclaim at Arsenal Gallery in Central Park. Green (whom I first met in my high school Spanish class) shared details of her latest project Pur·suit, her ambitions for 2019, and what it means to create an archive.

Tell me a bit about Pur·suit, the deck of cards you’ve been working on.

It’s a reimagining of Catherine Opie’s Dyke Deck from 1995. When it’s complete, in its physical form, Pur·suit will be a 54-card deck of playing cards with portraits of queer women, trans, non-binary, and gender-nonconforming people as the faces. I’ve shot close to 100 people now. In its digital form, Pur·suit will also exist as the beginning of an online archive – including the portraits that were not included in the deck – along with poetry; audio that will preserve complex narratives of identity as it was today. Since this project began, I’ve thought of it very much as a capsule of a few days in October, November, and December 2018 — and of whomever happened to be around the studio. I wanted it to be the kind of thing where in 20 years, another photographer could look at my project and say, “Hey, you thought your shit was radical in 2019? Here’s what we’re doing now.” Almost a passing of the baton.

How did you first come across Opie’s Dyke Deck? What struck you and how did it inspire you in terms of Pur·suit?

I was researching at the main library branch here in Manhattan. I came across Cathy’s Deck in an index, for Pratt maybe. I got really curious and found a set online for sale and ordered it. It was so specific to a time and place, the Bay Area in the 1990s. It was so radical for its time. I wondered, what do queer communities look like now? What does my community look like now?  I decided [that] I wanted to make something for Brooklyn. Though seemingly everything lives online now, it was important to me that it existed as an object that could be held and handled. Dealt.

Who did you photograph? What did you tell them about the project beforehand?

It’s a mix of people I know and don’t know at all. For the shoot, I [provided] a limited color palette and invited people to show up — but within that they could do whatever they wanted. Some people arrived thinking more about tarot. I did an open call and one person came and said, “I’m the Death card.” Others just wore jeans and t-shirts. It was fun for me, because there were parameters of color palette and the set, designed by my friend Jessie and me. But aside from that, I didn’t know who I was going to get or in what state.

You give your sitters a lot of freedom. In Attraction Experiment you asked people — from friends to strangers — to direct you in taking a self-portrait.

At the time (the end of 2017), I was really tired of being in control of the image-making. I felt like I was dictating so much of how the portrait was read and I was exhausted [from] that control. This project allowed me to take the instructions that other people were giving me and just become a performer, an actor, for however they wanted me to be. Participants ranged from old friends to people I’d slept with once. I had one person that I’d never met before. How those relationships played out was fascinating. There is an image of a guy choking me with my necklace. He is a guy that I slept with for a few months. Naked was the only context that we knew each other in and it felt very comfortable for him to say, “Take off your top and we’re going to do this thing.”

A strong community-based thread runs through your work, from Jewels to Attraction Experiment now to Pur·suit. There’s tension between being in a community and documenting that community. Do you have any thoughts on that?

It can be tricky being part of a community but also observing it, and giving myself enough distance to be able to make the picture. Sometimes it feels like if you’re too close you can’t see clearly. I’m of two minds. Sometimes you’re so close you can get to the core of the thing. But sometimes that intimacy prevents you from seeing more globally. I think I’m constantly jumping between occupying those positions. It can be destabilizing to be looking through an experience that way, but I welcome that.

How do you see your projects in relationship to each other?

The thread is me, but I don’t necessarily talk about these projects in the same way. I do think they’re about human ecology and the way people occupy space and the ways infrastructure and architecture and language influence the way that we interact and talk about ourselves and each other. And the ways that we name things. Maybe there are bridges in that way. I do think of them as separate but of course they’re not, but I’m not trying to weave them together.

What was new and distinguishing about shooting Pur·suit?

It was my first time shooting a studio-based project and there were a lot of novel elements that made me hyper-present, in a way. I’m very comfortable shooting in natural light and so I found myself consumed with perfecting the studio lighting. I’d never had so much help before, from the very beginning, from my friend Jessie to [other] assistants. And it was my first open call. I’d never invited so many new people into my work at once. Jewels from the Hinterland was like that in that maybe 60-70% of the people I photographed I didn’t know beforehand. But with Jewels, I was asking people give me two hours because I wanted to make sure we’d have time to sit and to talk and learn [about] each other a little bit to create some sort of intimacy. Pur·suit was much faster. With this project, I was shooting fifteen people a day. Each one in thirty-minute intervals.

It felt like an endurance exercise in some ways. For me, depending on the situation, I can be more extroverted, but all in all I’m more — just the fact of being on and present for another person every thirty minutes was a performance in itself.

So what’s the dream for Pur·suit?

To make the cards and release them in June. In the meantime, I want to really think about the digital archive — and how it can live and grow. I want to think about creating an archive that you don’t have to go dig up but that is living in the moment we’re living in and will stay in that moment even as we continue to move on. It will only grow for a year or two. I want to be intentional about time and ground the project in this time. This is a very tiny facet that existed maybe just for a moment.

Carolyn Lazard is somebody, who is a friend, but I think about her work often. I think about making work while [being] sick. Entering that into work, her work, but wondering if it’s something I could do in my work. 2018 was a mindfuck for my body, and I’ve been thinking about Carolyn and how she can very gracefully talk about her body, talk about disabilities, and talk about being sick in her practice. For me, those conversations have always been private but I realize that if it’s in me, it is also in the work.

You were in a car accident almost a year ago exactly. What was that experience like?

Oh. I was a passenger driving with somebody from LA to Palm Springs. She was speeding, doing 100 in a 65. I said, “I need you to slow down” and she didn’t listen to me and she lost control of the car. I had never been in a car accident before. All the airbags deployed. My windshield was cracked. We were stuck in a median of sticks and rocks and sand. It was terrible. I had never experienced pain like that before. I had never experienced anger like that before. That was January 8, 2018.  It rocked me. But there are so many other incredible experiences, from swimming in Nice in July to working on projects and with companies I had never worked with before.

I want to start working with wood. I want to make furniture.  I’ve been missing working with my hands. Maybe I’ll go back to making more ceramics. I want to shift my relationship to screens in my work. I’m always going to be a photographer, but I’m feeling fatigued by how many images exist. So right now I want to pivot for a little while and I’ll come back to pictures in a new way.

And move to Mexico City. This is the first time in my life I’m not tethered to New York. I just want to be in a different place. I already know how to live here. 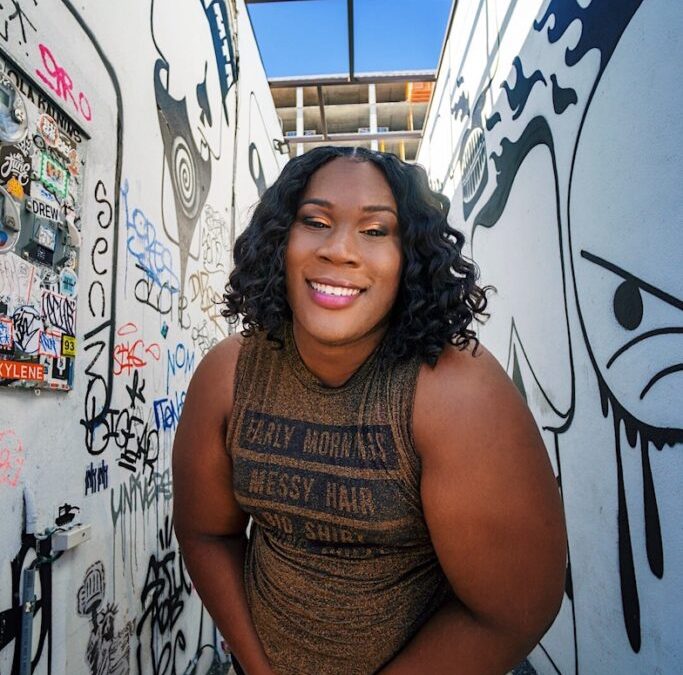 A new docuseries from artist, author, and motivational speaker Octavia Yearwood delves into the lives of trans people of colour. The first season of The…