Stockholm is renowned for its contribution to music – particularly in pop. Here’s an eclectic mix of songs by Swedish artists to listen to in Stockholm.

Born in Enskede, on the outskirts of Stockholm, sisters Klara and Johanna Söderberg formed the basis of the folk duo that would become known as First Aid Kit while in their teens. Emmylou was the first taste of what would become known as the sister’s distinctive style. Listen to this as your plane touches down – it’ll get you in the mood for adventure. It’s about love, loss and optimism. From the album The Lion’s Roar, released in 2012.

Robyn – Dancing On My Own

“I just wanna dance all night
And I’m all messed up, I’m so out of line, yeah
Stilettos and broken bottles
I’m spinning around in circles”

Travelling solo, and itching to go out for the night? Enough said. You don’t have to heartbroken to dance on your own to this song. From the album Body Talk Pt. 1, released in 2010.

“There was something in the air that night
The stars were bright, Fernando
They were shining there for you and me
For liberty, Fernando”

Of course we had to mention ABBA. As huge as this band is/was, they’re also criminally underrated as artists. The song doesn’t have much to do with the band’s native country, it’s about two war veterans recalling the Mexican revolution of 1910. However, the name “Fernando” was inspired by a bartender of that name who worked at a club the band frequented in Stockholm. So it’s included. Put it in your ears as you walk around exploring new lands, and tell me that you don’t get a bit emotional. From the album Greatest Hits, released in 1976.

My loneliness is killing me (and I)
I must confess I still believe (still believe)
When I’m not with you I lose my mind
Give me a sign
Hit me, Baby, one more time”

“But Britney isn’t Swedish!” I hear you cry. Nope, but producer Max Martin is. Martin is the most influential man in pop. Behind Lennon and McCartney he is the songwriter with the most number-one singles. His ascent began in the 90’s and he has crafted ear worms with just about every pop singer working today. He’s not always right – such as telling Lorde that Green Light was “incorrect songwriting” and presumably encouraging Taylor Swift to release her most obnoxious songs as lead singles – but he is always there. Listen to it any time you want. From the album …Baby One More Time, released in 1999.

“I’ve loaded my gun with blood
Here, the dust roll over the floor
Why must you sleep
Come crush me now, unarmed”

Are you trying to escape somebody, or recover from a break up? Bad news – this song, by Swedish rock band The Cardigans, won’t let you. From the album The Other Side of the Moon, released in 1997.

Refused – Worms of the Senses / Faculties of the Skull

Sweden is well known for its hardcore punk scene, and this song is one of the best examples. Refused formed in Umeå in 1991. If you’re into punk rock and/or hardcore punk, there’s a lively subculture waiting for you in Stockholm. Other Swedish artists you could listen to include Ebba Grön, KSM, and Asta Kark. From the album The Shape of Punk to Come, released in 1998.

Same lyrics, two totally different songs. Listen to the original by the Swedish electronic duo on your first day of exploring Stockholm. The upbeat electronic funk will giving you energy and liberation for a day of pounding the pavement. Listen to the gentle acoustic version by González (an Argentinian-Swedish folk singer) when you’re sitting on the plane, feeling melancholic to be leaving but excited to be going home. Released by The Knife for their album Heartbeats in 2002, and covered by José González for his album Veneer in 2003. 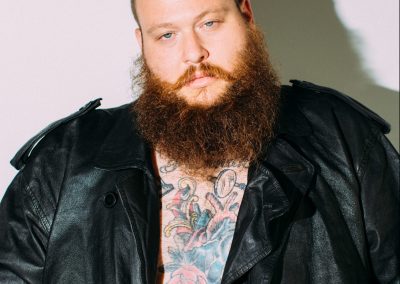 Action Bronson. A rapper, writer, chef, and television presenter. He chats with FRONTRUNNER about his latest album, Only For Dolphins.