Thoughtful and conceptual, Francesca Leone’s (b. Rome, 1964) painting has an elegant texture, subtle and attentive to individual detail. An internationally-renowned painter, she is the daughter of art, literally. Her father is director and producer Sergio Leone, the originator of the spaghetti-western film genre and one who had redefined the American gangster movie. Her mother, Carla Ranalli, was the prima ballerina of the Teatro dell’Opera di Roma. After studying scenography at the Academy of Fine Arts in Rome, she dedicated herself to painting, which starts from photography as a sketch, up to the work on canvas. After graduating from the Rome University of Fine Arts, Leone began exhibiting worldwide, starting from Italy with her first solo show, Riflessi e Riflessioni in Palermo. Then, in no particular order, at the Castel dell ‘Ovo (Napoli), the Capitoline Museums with her project Rifugiati delle Nazioni Unite (UNHCR), and the Venice Biennale in 2011 and 2013. Exhibitions in Milan, Turin, Moscow, Singapore, Madrid, St. Petersburg, London, and Buenos Aires have all followed.

In addition to giant portraits of personalities from the twentieth century (Si può illuminare un cielo melmoso e nero? at Magazzino, Rome), Leone’s newest project is an evocative and exciting one, where aluminium sheets become pieces of starry sky illuminated from below. In some way, the viewer is invited to “find his own star”, an immersive installation fit for contemplation. The artist’s style is contained in the words “recovery” and “ready-made”; her production materials bring with them stories and memories of a past life, reborn with a new identity in her hands.

An exclusive interview for FRONTRUNNER, Leone tells about her passion for art and her latest project made in Milan at the Gallerie d’Italia.

How did you approach art and, in particular, painting?

Art in all its expressions has always been present in my life. There has not been a particular moment in which I approached art because I was born and raised in a family of artists. Since I was a child, I have always painted and worked with clay, following a natural instinct.

Your production is conceptual and introspective. Where do you find inspiration?

Each work has its own inspiration. I do not follow a unique method. Some works are born from a photographic sketch, others, instead, from an idea that buzzes in my mind for some time until I manage to realize it. For others, still, the interest arises from a material that has its own intrinsic beauty such as concrete or iron.

How important are the materials and colours you use for your works? On what basis do you choose them?

My artistic production is based on the concept of recovery; therefore, the choice of materials is absolutely fundamental, because it is from the recovery of an object that the project to reinvent it and give it a new identity is born. For Monaci that I presented in Palermo, they were disused objects inserted into concrete. In the Carte series, we’re dealing with recycled sheets, rusty and worn by time, which I fold, crumple, cut and reassemble, until they look like sheets of paper, or light fabrics that time has consumed. In the Senza titolo series that I presented at the Gallerie d’Italia in Milan, we’re dealing with small pieces of electronic circuits, which I reassemble and assemble on a sheet metal until it becomes almost an “ancient” frieze, as technology evolves so fast, that it quickly became contemporary archeology.

In dialogue with the works of Mimmo Rotella and Ugo La Pietra, the exhibition Francesca Leone. Ulteriori gradi di libertà, nella città che resiste is a site-specific project created for Gallerie d’Italia, Piazza Scala in Milan. How was project was conceived?

The project was conceived from the proposal of the director Michele Coppola, to present one of my works in the Sala delle Colonne, in the Milan office. The room, despite being full of charm, made the task very difficult, given the presence of the columns. Thus, I created the main work, entitled Carte, made up of crumpled and reassembled sheets, 16 meters long and about 3 meters high, which unroll upwards to creep between the columns, themselves. The works that we decided to bring together with curator Andrea Viliani, we wanted them to dialogue with some works from the museum’s collection. So we chose two works: a small jewel by Rotella, and a collage by La Pietra, one for a chromatic and material reference, the other for the title Due gradi di libertà, recupero e reinvenzione, which is the central focus of my artistic production.

Is there a project you are particularly fond of?

Yes! A work on display at the Gallerie d’Italia that is part of the Ritratto di famiglia (Family Portrait) series, which appears to be a wool carpet, but is actually a piece of false ceiling from my parents’ house. A sort of upside-down, hard, strong and nail-filled ceiling becomes a seemingly soft and welcoming carpet.

How much has the figure of your father, Sergio Leone, determined your artistic career?

My father was a great example. From an early age, he took me with him on set during all the various stages of the making of his films. So, I grew up with a strong sense of image and I believe I inherited my artistic sensitivity from him.

On the occasion of the delivery of the McKim 2009 award to Ennio Morricone at the American Academy in Rome, you presented a portrait you dedicated to the Maestro, who collaborated with your father for the soundtracks of his films. What do you remember from that moment?

The most beautiful moment of that day was the expression of the Maestro, who had not yet seen the work and who was happily impressed by it.

Are contemporary art fairs still important for (or to) the artist, or has something changed in the art world especially due to the pandemic?

Fairs, undoubtedly, remain an important moment for the world of art because they are the meeting point for galleries, artists, curators, museum directors, journalists and collectors from all over the world that go beyond the market.

What are your next projects?

I have some very important projects, which I’ve been working on for some time, but it’s still a bit early to talk about them… you know, superstition! 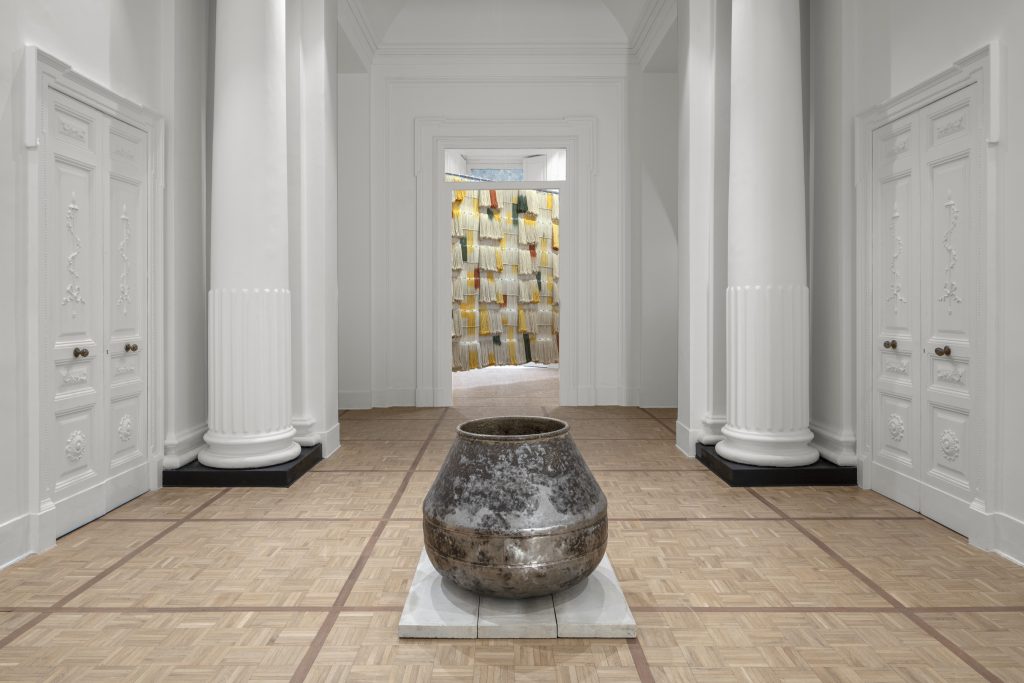