The paintings of Brooklyn-based artist Emma Stern feel like you are entering a new world. Her work reminds us that the human form is being reimagined each time a new sci-fi movie character, virtual reality animation, or digital avatar is created. Post-humanism is upon us in more ways every day. But, to really experience the “Stern effect” is to forget about the brush strokes. The magic of her work is in the beauty of a foreign world where digital illusion, skin tone, and environment play the part of an altered universe. Stern earned her BFA from the Pratt Institute (New York) in 2014 and has since shown her work at venues in Glasgow, San Francisco, Istanbul, Miami and New York.

FRONTRUNNER interviewed Stern to dig deeper into her new universe.

Tell me about the human form and how your idea of representing it has evolved over time?

My interest in the human form comes from classical figure painting, Italian Renaissance stuff, which I was obsessed with for a long time. It was my impetus for getting interested in painting in the first place. After 4 years of studying this stuff really intensely on a very traditional, academic level, I kind of hit a wall, I couldn’t figure out what I was adding to this conversation. As a female painter, I was perpetuating this really old and misogynistic trope of a male painter and his female muse, making voyeuristic work that existed entirely outside of any contemporary dialogue. Disinterested in flesh at that point, I started painting these avatars, which I liked because they were non-specific. It felt less like portraiture, more like generic, smooth, almost featureless protagonists. The fact that they are hyper-sexualized, and aware of their sexuality, adds another layer to them not present in the stuffy portraiture of yore.

Your color palette is specific to a modern digital world. How did you develop this?

This has to do with what I mentioned before, losing interest in flesh. I wanted to make a clean break, I didn’t want anyone to think I was painting people, so a very synthetic palette became useful. The colors I use do not really appear very often in nature, which is a deliberate choice. I almost don’t want them to read as paintings right away, I like that there is some confusion about my medium. Someone recently came by my studio and was completely shocked to learn that they were paintings — they had assumed from what they had seen online that it was all digital. 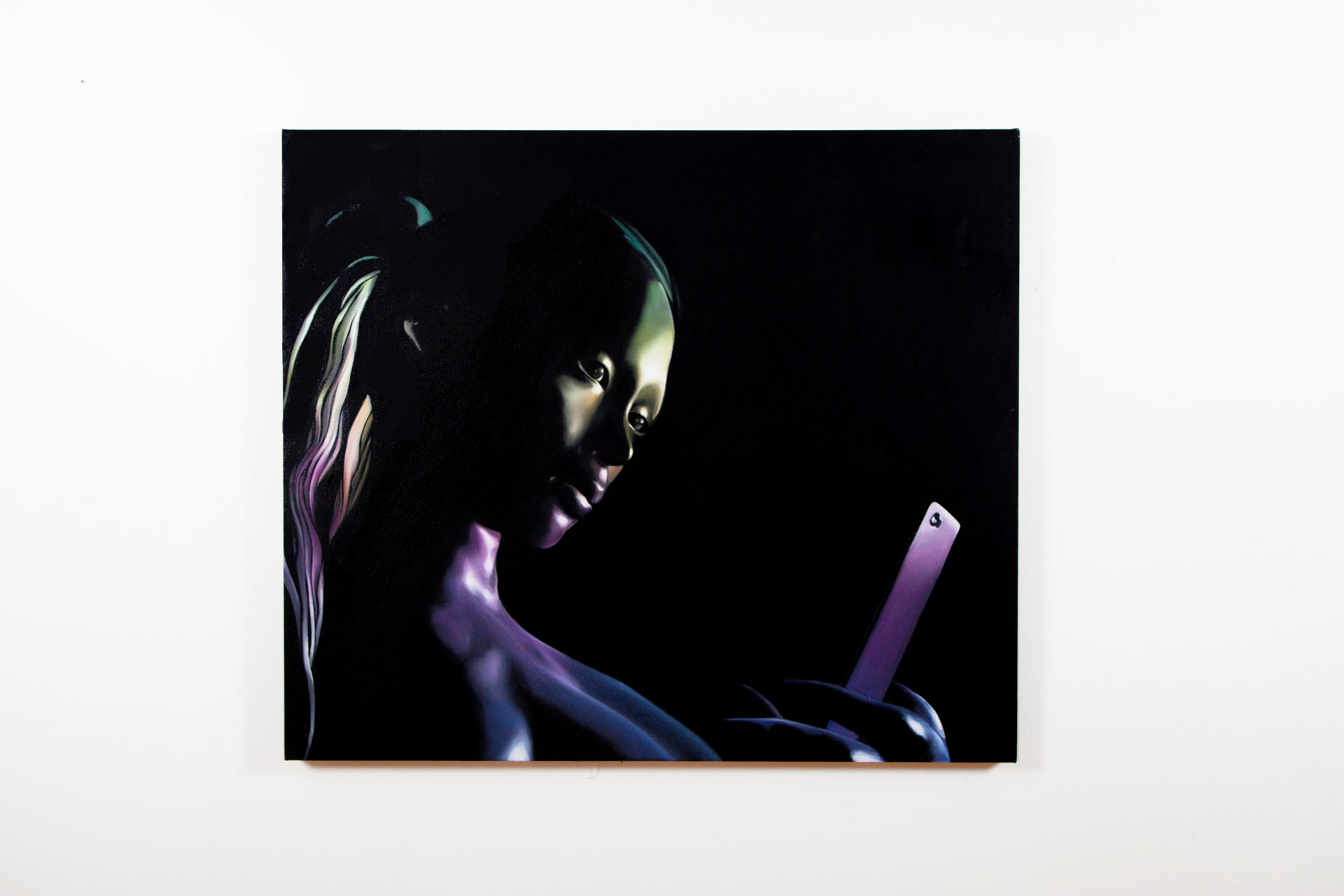 Is there a narrative or character driven story in your work? What stage of the process do you develop the character’s characteristics?

I think there is a narrative that is developing on it’s own. I began this series doing pretty straightforward portraiture, but now I’m developing interior spaces for these characters to exist in. This makes for more interesting, dynamic paintings and also lends itself to narrative. I think the characters start really developing when they are no longer in a vacuum, but located within a specific space.

Tell me about your relationship with the digital/digital world in your creative process?  What inspires you?

I like to emphasize that my background is in painting, not in new media or digital art, so the fact that I find myself here in that world, getting asked these sorts of questions is still a little weird to me. I was always interested in technology and started using message boards and ARGs from a pretty young age (when digital aesthetics were also pretty young), and this probably affected my aesthetic taste as an adult, but I didn’t connect the two until several years ago.

Realizing that my interest in the human form was connected to the idea of avatars, post-humanism and the digital self was a huge breakthrough in my mind, and I think I started doing it (luckily) at a time when lots of people are really interested in having this discussion and looking at art that tries to make sense of it. I am really inspired by writing on this subject, especially all of the prophetic literature from the late 90’s like ‘The Age of Spiritual Machines’. I’m really inspired by gaming culture, specifically the games that require you to customize an avatar before you begin. I’m inspired by internet trolls. I am inspired by all of the people who made fake profiles pretending to be me when I was 15 years old and had 16,000 friends on Myspace. I’m inspired by my early memories of playing Neopets. I’m inspired by Sci-Fi pulp book cover art. I’m really inspired by the early CG music video Pantera made for “Planet Caravan’, which is actually a Sabbath cover. 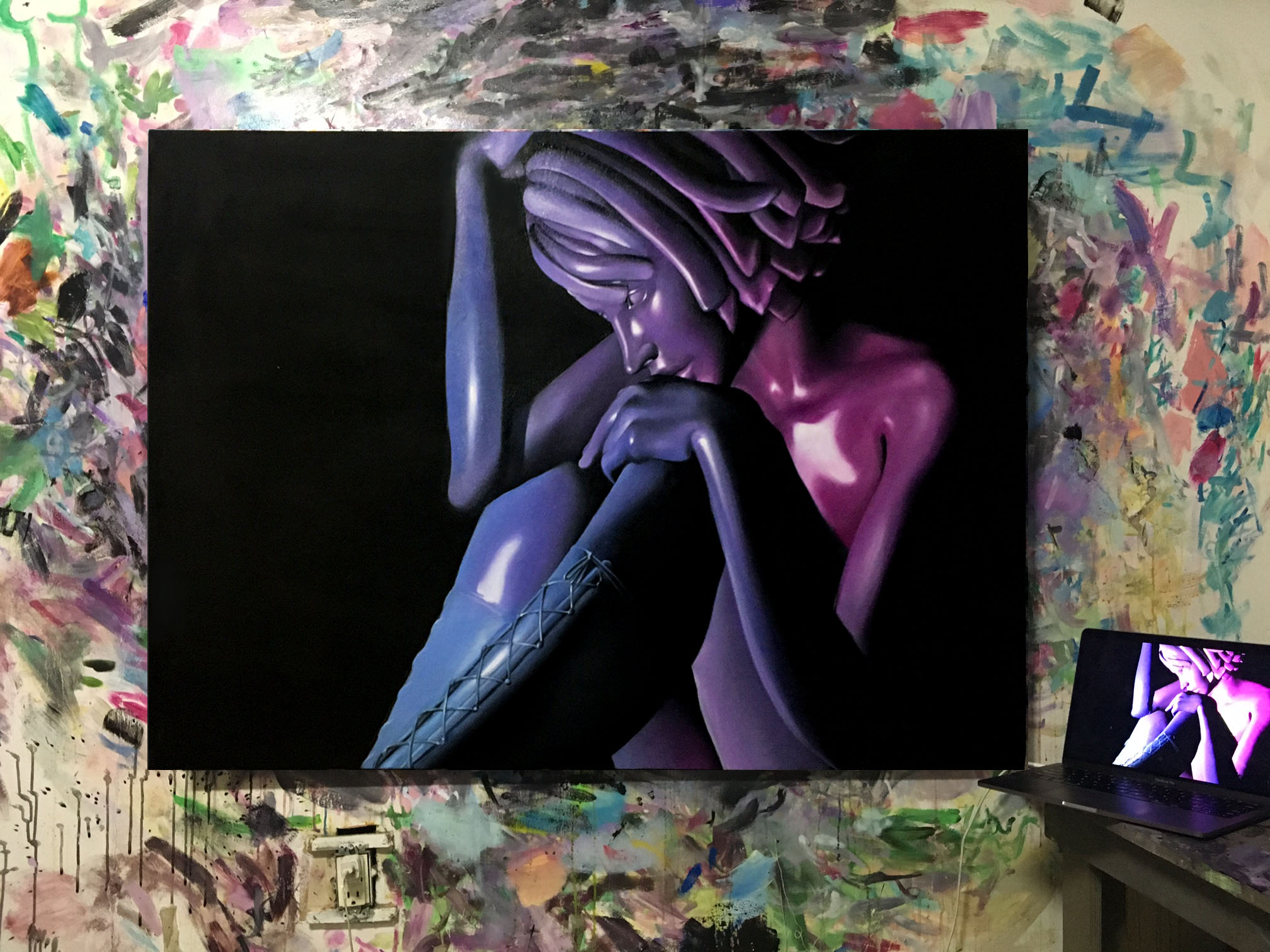 How do you present the work?  What motivates your exhibition choices?

As a painter, I am partial to the white cube format, but more and more I’m researching the possibilities for presenting this work in VR, with time-based components.

You have a 360 degree space on your website. That’s rad. How did that develop and what were the challenges and discoveries there?

That 360 composition was the by-product of another composition I was working on for a painting that just never stopped growing. I wanted to create an interior, a “house” for these characters. I have yet to make the painting, but creating that space opened me up to a whole new way of thinking about virtual spaces. This has turned into a much larger project, which I don’t want to say too much about just yet, but it is a cool example of how using technology as a tool to make better paintings has turned into more than a tool, it’s turned into the thing, itself.