Gentrification’s detrimental effect on alternative spaces seems like a tale as old as time–or at least, the last few decades in New York City. As the story goes, an artist begins mounting exhibitions of their friends’ art in their apartment, building a community of artists and art lovers, only to eventually lose the space once their landlord gets a whiff of potential profit.

When this recently happened to artist Austin Eddy, he didn’t allow the disappearance of a permanent and stable spot to be the end of his space EDDYSROOM, which was originally located in a closet of his Greenpoint apartment. Instead, he transformed EDDYSROOM into a roving, nomadic curatorial project, organizing shows with a similar sensibility in other galleries and artist-run venues. With a current group exhibition at Usable Space in Milwaukee, on view until August 18, and an upcoming show at Galleri Thomassen in Gothenburg, Sweden, opening on August 16, EDDYSROOM’s reach is growing internationally.

And yet, even in settings larger than a Brooklyn closet, Eddy hasn’t allowed EDDYSROOM to depart from its supportive and close-knit D-I-Y roots. This can be seen at Usable Space where Eddy gathered a range of artists, many of whom have shown with EDDYSROOM previously, that all explore abstraction. While a painting-driven show (with one multicolored, branch-like sculpture by Richard Galling), it is anything but uniform, with works ranging from Matthew Dale’s checkerboard intervention in a tree-lined forest to Saskia Fleishman’s thick squirts of neon paint and Zuriel Waters’s gridded asymmetrical painting done on hemp. Not all the inclusions are entirely abstract though, including Emily Davidson’s mystical Teller’s Window, which depicts the fortuneteller and her crystal ball as if they’re floating from a cloud of fiery red and pink paint.

I caught up with Eddy on the progression of EDDYSROOM since our last conversation two years ago. We spoke on what exactly happened to his previous Greenpoint space, how he approached curating the shows at Usable Space and Galleri Thomassen and what he predicts for EDDYSROOM’s future.

You began EDDYSROOM by curating group shows in a closet in your Greenpoint apartment. However, this space was recently displaced. What happened?

It’s crazy to think it all started three years ago. I think the situation that caused the move is quite common in New York–greed? We were lucky that the place was “reasonably” priced for a while and somewhat under the market value. But that came with problems as well. The place was infested–or inhabited–by over eleven stank ass cats that the landlord sort of took care of. With that amount of cats, you inevitably get the smell and the filth. The last two summers in that apartment, the hallways were infested with fleas and there was little action taken to rectify that situation. Moreover, the landlord started taking liberties and entering the apartment without asking. The frequency of these unattended visits only increased as he placed the apartment on the market. It got so bad that he started to pry bar the doors open when they were locked. Essentially, he was doing a little “B&E” to sell the joint. At the end of the day, we moved out since he wanted to cash in $2.5 million on a flea-infested apartment that sold to a doctor from San Francisco as their second home.

You recently expanded EDDYSROOM into curating exhibitions in other places. How did EDDYSROOM evolve into organizing shows in gallery spaces?

There were a couple other instances in which EDDYSROOM expanded into another location. Way back in the winter of 2015, Bannerette, run by Stuart Lorimer and Emily Davidson, and EDDYSROOM worked together to put on another abstract show. That was a good time and those guys are great. They ran a really great program as well. The show had a number of artists that reappeared in other group shows such as Nathan Carter, Howard Fonda, Matt Phillips and Emily Noelle Lambert. Stuart actually did a two-person show with Max Heiges in the original closet space, and Emily [Davidson] is currently in the group show at Usable Space. Then, there was also the time EDDYSROOM co-organized a show with artist Benjamin Edmiston at David Shelton Gallery in Houston, Texas.

Expanding the shows into larger, more traditional spaces seemed like the next logical step for the space to take. With no home, where do you go? Your friend’s house usually. So following that train of thought, I started reaching out to people and discussing the idea of moving the shows to other new venues. I think it is a good way for galleries to show work they wouldn’t normally show and it provides an opportunity for EDDYSROOM to bring more people together.

Usable Space is an artist-run space, while Galleri Thomassen looks to be a more traditional gallery. How has your approach to curating changed in a gallery environment? Have you consciously tried to preserve a similar familial atmosphere as the earlier apartment shows?

They are different sorts of venues in many ways, but at the end of the day, all parties involved are art galleries. I still try to keep all the shows I organize as honest and sincere as possible. Each artist is included to help balance out the show, while also trying to highlight their own personal voice. At the heart of it, I am really still interested in keeping it D-I-Y and having a strong sense of community, while trying to never really fixate on profit and the market side of things.

At Usable Space, you brought together a diverse group of artists (including yourself) who take varying approaches to abstraction. How did you conceive of the show and why did you want to explore what other artists are doing with abstraction?

The show at Usable Space was a very exciting opportunity for EDDYSROOM to gather together a larger group of artists than previously possible. With this show, the curation was rather straightforward. All these artists are all pretty close friends. I have been talking with a lot of these individuals for quite some time over the years. I find that each artist in the show is doing something very unique and interesting with painting. These kinds of shows are exciting places to see so many individuals who are interested in such a simple yet complex thing like abstraction. This show provided a platform for these various viewpoints to converse on a larger platform and help bridge the community of artists. I also find that at the moment, abstraction is not at the forefront of the conversation and so it is something interesting to reengage with.

Since you are included in the exhibition, do you see a connection between your curatorial and artistic practice?

It’s hard to say they are not related or influenced by one another. I think community and conversation are crucial to development and exploration as an artist. What better way to have conversations with artists about work and have work in conversation with each other than to organize shows? Moreover, curating these shows has been really helpful in bringing together various perspectives and helping to flesh out ideas.

The show at Galleri Thomassen opens on August 16. What will that exhibition be like?

The show at Galleri Thomassen will be somewhat similar to the show at Usable Space, addressing very basic ideas in making, form, color, play and a common thread of pushing abstraction. All the work tends to pull from life and twists it into something new and personal. These shows are heavy on the appreciation of abstraction at a time when the figure is really being pushed. With this show too, there will be more range in work. It will have painting, drawing and sculpture. I’m looking forward to including some of the sculptures by Bill Saylor, Nathan Carter and Joanne Greenbaum.

This show will also have far more range in age and geographic location with this group of artists. There are a number of European artists in the show from places like Sweden, England and Denmark. This sort of international show will be a first for EDDYSROOM. In the past, the project has predominantly been more focused locally. But moving out of its small space in Greenpoint and getting the opportunity to work with these various spaces that have opened their doors, it’s been very exciting.

What do you see as the future of EDDYSROOM? Do you plan on continuing to curate exhibitions in other spaces or would you like to eventually find a stable home for it?

As of right now, EDDYSROOM will have to live more as an experiment, traveling between spaces. The current climate and rent rates make it nearly impossible to think about opening up a solid space. I think in the meantime, it makes more sense for the project to be able to have as much freedom as possible without the overpowering pressure to sell or show what sells. That being said, there are a few projects in the pipeline that will hopefully pan out. I am currently in conversation with artist Bradley Biancardi about curating a limited edition, one or two-time print publication as a group show and I have also started to talk with Young Space about collaborating on a show in 2019. But, between then and now, there will more than likely be some more punk rock pop-ups or something similar.

All Photography by Daniel McCullough 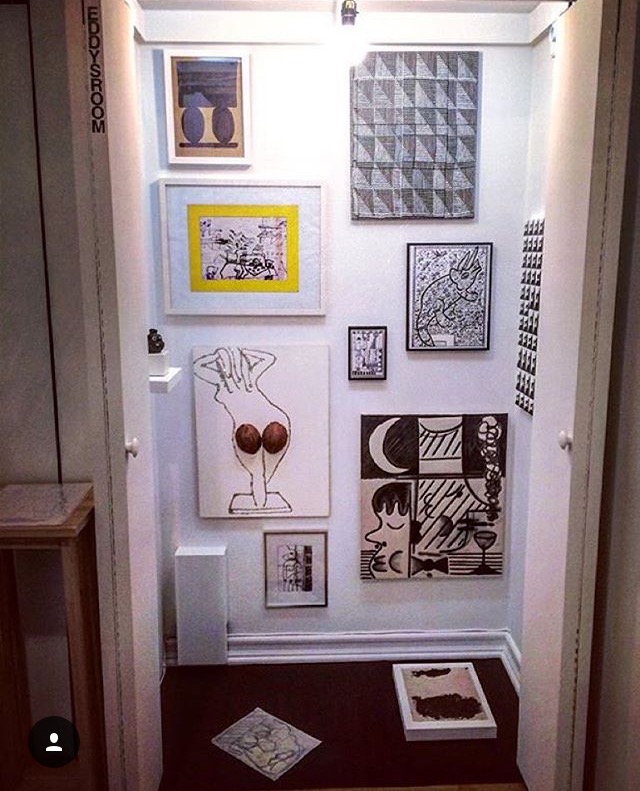 Who would have guessed that a closet in a Greenpoint apartment would be a captivating way to show cutting-edge art, as well as bring together a supportive community of artists and art viewers? 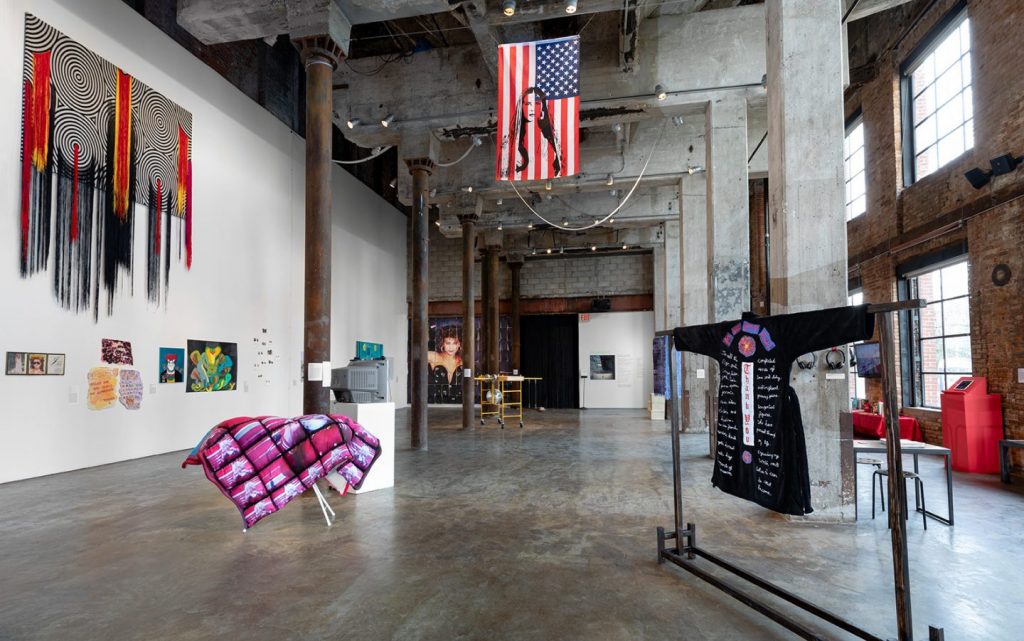