New York’s Crush Club show what’s possible with a pristinely simple funk guitar lick and confident throwback harmonies. How do you get through the end of winter? Maybe “it’s about trust”–in this case, trusting that when you’re done dancing it will be warm outside. Be sure to check out their whole EP, Alive, which was released in November.

John Dragonetti is best known as a founding member of The Submarines, but in September he released his first solo music as Jack Drag since 2002. “Little Lies” is a catchy track with uplifting strings and down-played harmonies from popular songwriter Aimee Mann. It’s definitely more than just the line, “take me back to California,” that captures the hopeful feeling of landing in a city you love. Check out the rest of Dragonetti’s eclectic creative career on his website.

The Shifts – “Is It Snowing Today?”

The Shifts, a self-proclaimed “Sardonic Indie Garage Rock” band from Eugene, Oregon, harness the magic of a satisfying rock build-up on “Is It Snowing Today?” The gallop of bass drums is soon joined by bright, assertive guitar blips and unassuming vocals, which grow towards a catchy chorus that makes a big impression. Check out their five-track release from last May, Yet Another Change of Plans.

You may know Caroline Smith from her cozy folky work with the Good Night Sleeps, or from her album Half About Being A Woman, which explored her love of 90’s soul music. Smith has shapeshifted her style once more on her recent Bad Habit EP. “Debbie” drips with a new-found swaggering funk that proves to be a perfect vessel for the confidence that has always made Smith a special performer. Check out Bad Habit on streaming platforms.

The Solarists – “Cup of Tea”

There is apparently a secret dance party happening in Provo, Utah, and The Solarists are headlining. “Cup Of Tea” comes across as a worthy celebration of the contagiously fun and danceable indie rock that defined the mid-2000’s. You can buy their CRYPTK EP on their website.

Sometimes two people just understand each other’s creative vision even if they did just meet recently, and even if they did meet through Spotify. Patrick Zeinali’s pristine production on “Strangers” makes it feel like you paid a professional to clean out your headphones, and it lays a clear path for Jordan Caiola’s smoky yet smooth vocal work. Listen to the rest of their Coasts EP here.

Lauren O’Connell – “In On The Joke”

Country and indie rock collide on Lauren O’Connell’s track “In On The Joke” from her 2018 album Details. The Bay Area singer-songwriter has a way of finding the perfect balance between vernacular and poetic language, and she adds more than a little attitude for flavor. You can dive into her whole discography on Bandcamp.

Florida shoegaze duo Cathedral Bells prove that lullabies can be dance music too, with “Cemetery Surf,” off their new eponymous EP. Their Instagram mentions New York show dates in May; follow them now to stay tuned for details.

Austin’s Indigo Bunting plays sunshiny indie psych rock that makes it hard to be mad. Let their fantastic falsetto harmonies, vivid brass, and ambient synth convince you that you didn’t just slip on ice on the way home from the train. If you want more, also check out their brand new single called “Reading Wrong/Lavender Mountain.”

Hippo Campus quickly became a hometown favorite in the Twin Cities after forming in 2013, and since then they have earned a faithful international fanbase through their energetic live shows and musical versatility. Jake Luppen’s scooping vocals pair well with electronic bloops, and the band’s personality and artistic sense of adventure come through well in their “Bambi” music video. Their US tour begins in April; New Yorkers can catch them at Governors Ball on May 31.

Brooklyn indie duo Tallbird brings some early 2000’s lo-fi pop energy to their track “Sunburn Sad.” The hazy vibe of the instrumentals provides an underlying calm while the nostalgic-tinged vocals lift you up. Be sure to check out all seven tracks of their newest release, called Sunburn. 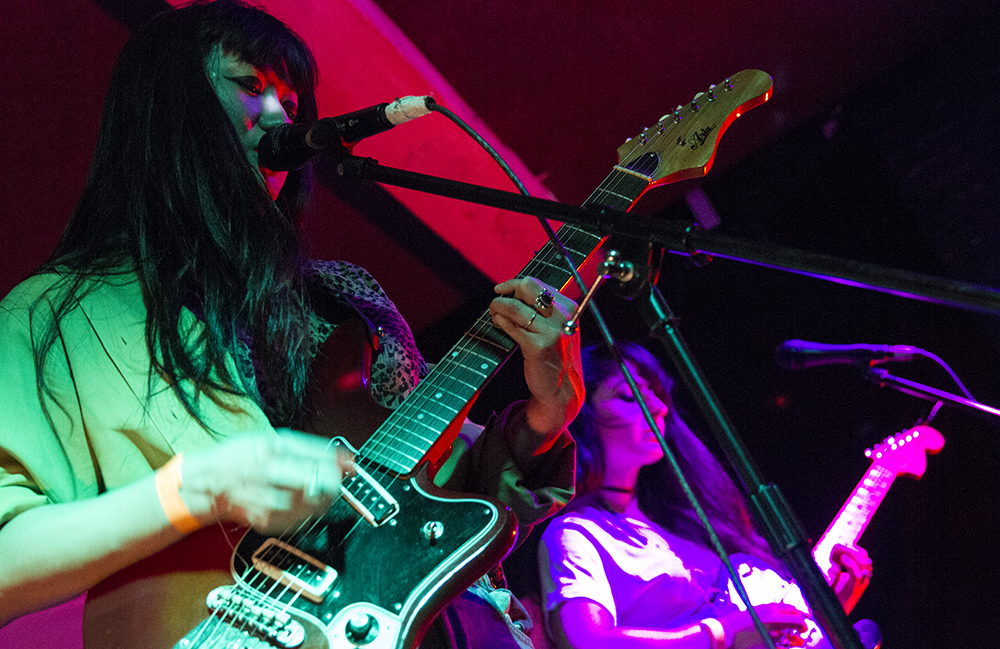 they possess a sprightly vibe, yet it’s unmistakably and curiously entangled with a hardcore, no-bullshit fervor.