Denton Burrows gives you a glimpse into a hallucinatory dream state, an abstraction countering convention. The style in which he creates has an allure that pops out at you with charismatic magnetism. While he has done illustration, his passion stands in gallery appearances and mural creations. He likes to connect his artwork to his surroundings, inspired by his upbringing in NYC and his research into the issues of our time. Denton enjoys relating to those around him through his work. If you are a beer drinker, you may have come across his work for he was recipient of the 2016 National Can Art Prize for PBR beer. Denton is the proud co-founder and CEO of Dripped on Productions, which is an art production company and also works as a project manager for Center-Fuge Public Art Project. Burrows continues to evolve as an artist, creating art that push the boundaries of the possibilities of what art can be. 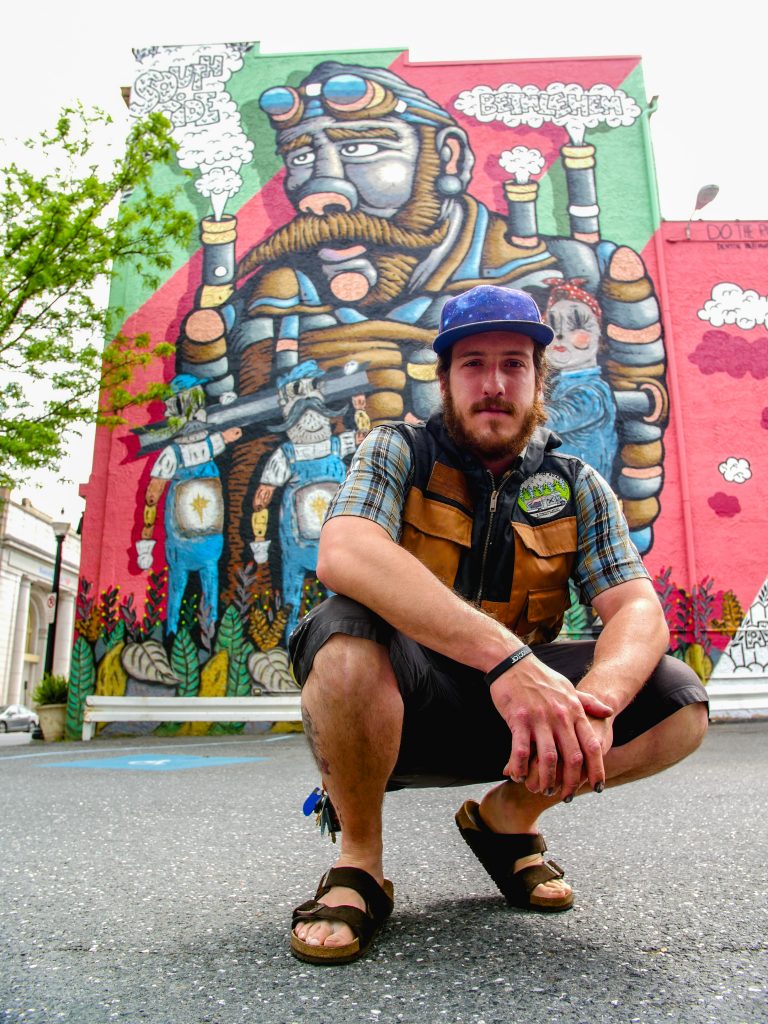 What impact did your upbringing in NYC have on your perspective of your artistic vision?

Growing up in NYC allowed me from a very young age, to be continuously exposed to art. My mother is an artist and a jewelry designer so once I could walk, we were off to museums and art shows on a regular basis and I was constantly exposed to her personal artwork as well. In addition to great exposure to a diverse art world that NYC provides, the exposure to all different kinds of people, food, architecture, and culture in general certainly played a huge role. I think my artistic vision was built from a very young age but was not really recognized by myself or others until college. I always drew in school notebooks and at home but never considered actually being an artist until I met a specific professor in undergraduate studies. 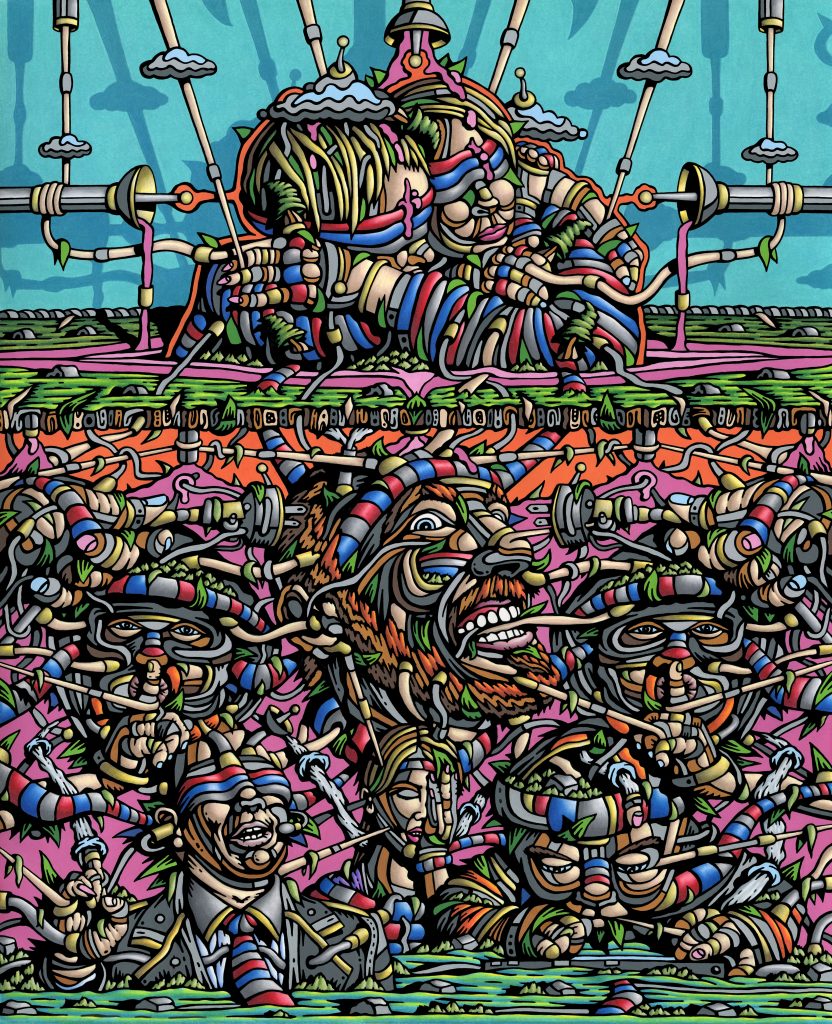 Where do you get the inspiration to birth your artistic aesthetic?

I went to Lehigh University undergraduate because it was the best liberal arts education I could get and I did not yet know what I wanted to do professionally. I was on the path to double major in Psychology and Anthropology but was also taking drawing electives. My drawing professor was a very inspirational man named Berrisford Boothe. I was not getting very good grades due to my lack of interest drawing still lives etc. I decided to show the professor my personal sketch book, which I had never shown a teacher or really anyone for that matter. Once he saw it, he acknowledged my personal style. He told me it was extremely unusual and that I would be doing myself a disservice to not further explore it. He essentially offered to create his own version of an art major for me, adding certain classes and removing others so I had more time to develop my personal style. He refused to teach me color theory because he was more interested in my own development of what he saw as an unusual relationship to color. So, to really answer the question, my artistic aesthetic was birthed simply by the permission to pursue it and the recognition of my ability by a man and an artist I had tremendous respect for. Additionally, this time period was also when I began my fascination into studying contemporary society. I began to research politics, technology, sociology, psychology, and the environment. This research, coupled with further exploration of my style, led to the beginning of my artistic voice and aesthetic. I realized I could comment on my observations of contemporary society through my artwork. 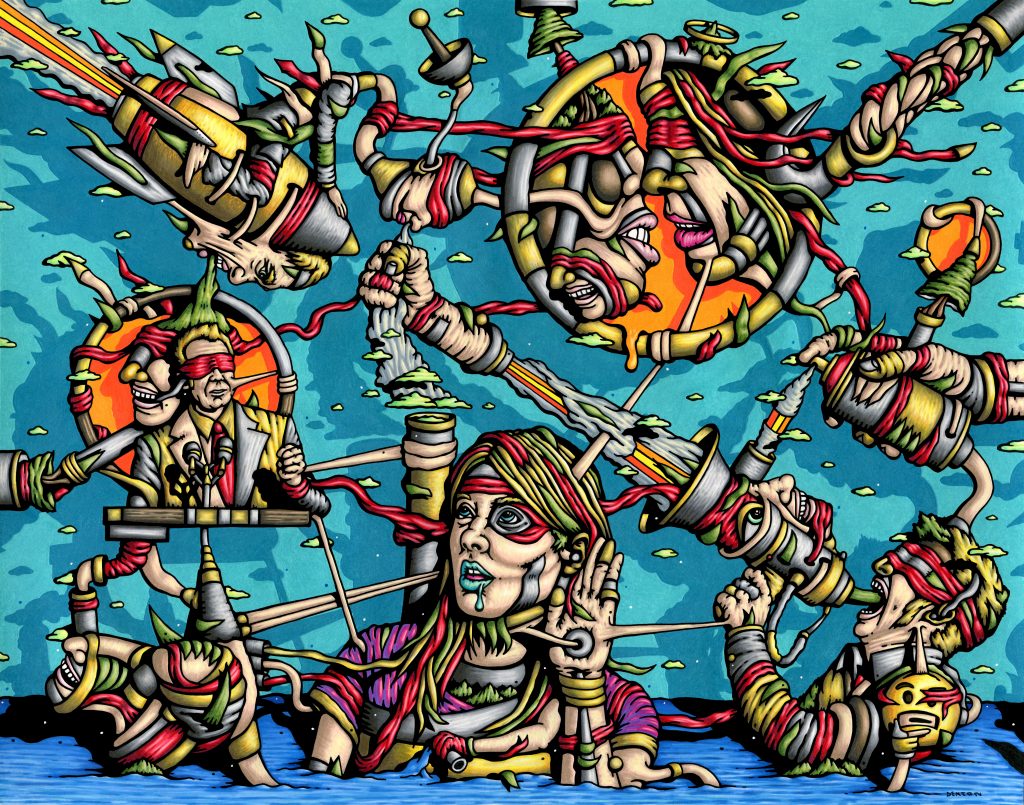 What were the beginning stages of your evolution as a contemporary artist?

The evolution of my work from the more exploratory and open ended years of undergrad towards a more complete style and vision began once I attended The School Of Visual Arts in NYC for my Masters in Illustration. I decided to apply to that program instead of a fine arts major because I wanted to learn how to better construct visual narrative and communicate visually. The Masters program was intensive and focused and helped me refine my style and really helped me find my voice because I was going against the grain there. Most people were trying to become professional editorial illustrators or comic artists but I was still finding my path and I knew it was a path that was more open ended and would eventually dive into many aspects of the art world from illustration, fine art, street art and even curation and artistic entrepreneurship.

What’s your position on the role and proliferation of street art in NYC and how do you feel like you can contribute?

I think the most important thing is that it is proliferating. The debate about details and arguments of gentrification will always rise, competition will emerge, and beef will occur, but the more public art the better. The city needs it, the public needs it, it makes a difference; even if it means working in more corporate ways, done correctly. There is a chance for artists to make some good money doing what they love and public art is more important in todays political climate than ever before. I also think it is very important for graffiti to remain prominent in the rise of street art. They started it all, they took the risks and began the movement in my opinion and people need to honor that. All my skills with a can came from knowledge passed down to me by veteran graffiti artists. In regards to how I can contribute, I think there are two ways. One is by continuing to make my murals and staying true to my artistic voice. The other is being on the other end of it, using connections I have to help other artist rise. Working for Centre-Fuge Public Art Project is one way I do that and the other is through the art production company I co-founded called Dripped On Productions. What was your biggest accomplishment as an artist?

Because I work in many different worlds of the art world, I have a few. In the gallery world, my first solo show in NYC at Greenpoint Gallery was a huge accomplishment for me. It was the first time I really got to display a full body of work that was very refined and was full of intense social commentary. I also accompanied each piece with honest and forward opinionated writing about the subject matter. I was nervous about the response and I ended up selling 75% of the show the first night. That meant a lot to me. Not only was my artistic style acknowledged but so were my opinions and observations about society. Secondly, more in the illustrative or corporate world, winning the 2016 PBR National Can Competition was a big deal. I had my design on 35 million cans and 30 delivery trucks nation wide. That year was a big step for me in recognition, making connections, and proving to myself that my work also had an ability to step into the mainstream. It also proved that with the right company and staying true to one’s artistic voice, an artist can make some good money and maintain their creative freedom.

Tell us about your role at Dripped on Productions and what it is.

I co-founded Dripped On Productions with Jonathan Neville in 2013. Dripped On Productions is an art production company based out of NYC. Dripped on productions was created to help integrate street art and other forms of art into different industries while maintaining artist’s integrity and getting artists properly paid for their talents. Since 2013 Dripped On has completed over two dozen jobs including music festivals, nightclubs, restaurants, bars, and office spaces. Dripped On Productions most recent endeavor is its one of a kind traveling artist residency Dripped On The Road where we partnered with artist Ramiro Davaro – Comas to create roughly one month trips in an RV, where we travel with one or two resident artists to several cities painting murals and creating works on paper for a gallery show at the end of the trip. In the past year Dripped On The Road has done 3 major trips covering almost 10,000 miles and over 20 states on the east coast. We have painted over 25 murals and we are hoping to expand the program this new year and cover lots of new territory.

What are some words of advice you can impart on aspiring artists trying to make it big in NYC?

I think there are a few major points of advice I can offer. One is simple, work hard. Work harder than people with normal jobs. Art is input and art is life, that’s the beauty of being an artist, anything can inspire us and we must be open to experiences and opportunities and always working to get better. Another piece of advice is something I think art educations fail to emphasize, which is that understanding the business side of being an artist is incredibly important. Understanding what to charge for your work; not being afraid to ask for what you see your value to be is essential. Also, understanding taxes for artists is very important and all the deductions you can take advantage of to help you financially. Finally, while staying true to yourself and your craft and vision, it is important to network, collaborate and immerse yourself in the local scene. You never know who you might meet and the opportunities that might fall in your lap. Art can be a lonely struggle but all artists, while it is a competitive environment, need each other to improve the chances of aspiring artists as a whole.

Alexa Modugno is an accomplished classically trained violist, performance artist, fashionista, social media guru and writer who is passionate about NYC, culture, film and the arts.