Prolific in his work, artist Darryl Westly uses bright, tropical color sequences to capture the sentiment of the American dream, which he titles his first series of work. Depicting majestic interiors fit for the upper echelon, it is through his work that you are transported to a utopia of vibrant florals and well constructed architectural designs. The reoccurring opened windows imply a pleasurable and much-needed vacation from the quotidian humdrumness of life, taking you on a journey into a “coastal” (as he defines it in one of his titles) destination. As an artist, he shows impressive variety in style, as his second collection of work is vastly different from his more standard work. His second series, The Sleepless is more gaudy, with flashy neon fluorescent lights, a perfect depiction of snazzy New York City during the night time. His impressive background, having graduated from Cooper Union with a BFA has given him the foundation and artistic dexterity to create pieces that are intensely meaningful.

Tell me about your background as an artist.

I was born in Chicago in Hyde Park, a relatively small neighborhood bordering Lake Michigan on the city’s South Side. Its particularly well know for being home to Barack Obama and where the Atom Bomb was developed. From an early age I was interested in history particularly how early civilizations came to develop. As I grew and became more aware of the world around me I found myself looking to the past to understand how interconnected and woven the diverse communities of people that lived in the city where and how art could and was used as a means of telling a story, at times outside of the limitations of words and language.

In this way I found myself pursuing numerous forms of expression throughout high school, through sports such as skateboard along with graffiti, poetry, music and film. It was while attending a program called Gallery 37 in Chicago that I really began to explore painting. On a class trip at the MCA I was exposed to Jeff Koon’s work and felt a strong connection to his work.  I think the phrase “a picture is worth a thousand words” had been making its rounds through some of my text books at the time and I found myself perplexed by its meaning while at the same time enthused by its possibilities. And the idea of endless possibilities is what eventually led me to New York.

How did working for Jeff Koons impact your perspective on art?

When I began working for Jeff I was still in School and almost immediately found myself overwhelmed by the experience. I believe I said this once before but it remains the easiest way to describe it – working for Jeff is essentially a kind of “apprenticeship” without the training wheels in how and what it takes to produce an artwork from concept to product. While I feel that that the word “product” is a bit loaded, what I essentially mean to convey is what it takes to create something complete[ly] intangible (an idea) into something relatively tangible. Besides gaining a dozen subcontractors worth of knowledge in various forms of construction and materials (not just limited to painting) what I truly found priceless was Jeff’s consistent belief in giving your whole self to the artwork – the work deals with something real, a place in time and experience, and that it is this honesty with yourself and extension your audience, that gives birth to great art.

What are you looking to convey with your art?

My intention with my practice has been to look at myself and the world through a lens that resembles how we see in our minds as opposed to what is nice and cut and dry “objective” reality presented politics and history (or art history for that matter). As a people we often try to make sense of things we see and experience, creating our own utopic vision of the world. But I prefer the mess, the lines in between and how they break down or at times meld into one another.

There’s a disparity between the two series you have. One is more tropical paintings and the other is more urban fluorescent lights. What accounts for this and what inspired the second series?

Yes, the series American Dreams was born out of my experience in seeing how distinctly class and race are used as means for edifying or deprecating peoples’ experience. I started with foods, particularly the most popular foods in America as recorded by twitter trends and Google zeitgeist. I decided to paint the early images in a photorealist style that recalls lowbrow advertising found within bodegas or the Co-op markets and Aldi’s that line the Midwest. Eventually I began to use those images found within popular consumerist design and travel magazines after being struck by the often colonizing language would be used to exotify certain countries while regaling others. Ostensibly the western and euro countries were applauded for their pillars of culture and civilization while those belonging to the third world and beyond were placed upon a pedestal for their beautiful beaches or pleasant weather. The resulting a mise en scene created by juxtaposition of images (interiors/exteriors) sparked my fancy in how it spoke to a wider conversation about unquestioned objectivity of the canon of taste as defined by western art and philosophy.

The Sleepless had been by extension a diary or catalog of my time maturing in New York city. The fluorescent Lights are taken from small bodegas and specialty service stores such as nail salons that I found talked to my ideas about art how capitalism works on different levels ( read class). It also exists as a small independent publication that I started and feature the work of different artists and writers that I have had the pleasure of connecting with during my ten years living in New York.

What are some ways you have garnered esteem within the art community of NYC?

New York is a big city full of colorful communities and people. When I was in college I focused my senior thesis on creating a small run publication and show that focused on all the various creative people that I had met while exploring the city. The publication called The Sleepless, was really influenced by interactions and friendships I had made while staying up late into the night. I remember reading a freshman what I believe is a quote by Duchamp that states the “The History of Art is a history of communities”. I really have to thank all the people such as Vivian Brodie, who’ve welcomed me into their life. Curating, whether it be exhibitions, publications or dinners, or zine releases in nightclubs allowed me to reach people in a way that felt natural and proactive. In doing so I found myself and continue to find myself entranced by the diversity of ideas that can be exposed between two people in sharing a glass of wine or a coffee.

What are your goals as an artist moving forward?

This is something that I’ve been giving a lot of thought to as of late. When I was younger I found myself constantly wrestling with my thoughts emotions and beliefs, particularly as a young man growing up in Chicago and throughout high school. Though I don’t have much interest in the returning to that version of myself as I’ve grown I’ve come to accept and recognize just how formative many of those experiences I had was, and the strength and clarity of the emotions that I had were in forming my world view. At times I believe making art is about recreating the self, and finding the courage to expose that to the world. The fear lies in being misunderstood. So I believe that is my goal in a sense, to be misunderstood. 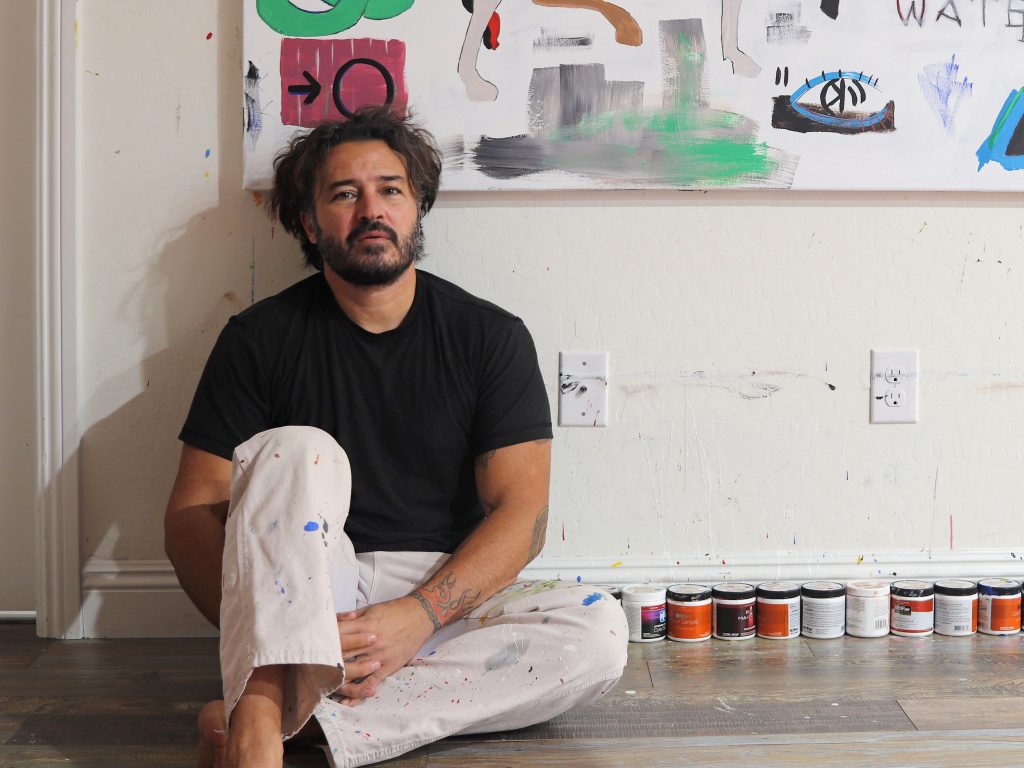 ‘Are you an artist or a machine?’ Prolific artist, El Cavo, ends the interview with the above. A question that, among other things, grabs us…