Listening to Channel Tres makes me feel as if rap and EDM had a black baby. But when I saw the Compton producer, DJ, musician and artist perform at this year’s Warm Up festival, I knew I had tapped into an artist much bigger than a combination of two genres. MoMA PS1’s Warm Up is an annual summer music festival that lifts up the voices of innovative and underrepresented artists. Every Saturday in July and August, acts from across the globe share their unordinary yet tasteful music at the museum in Long Island City, Queens. One of the many artists who took the stage–or, dare I say, owned the stage–this year was Channel Tres. Dressed in all black, Channel Tres danced with the swag of a black man not afraid of his blackness or what anyone has to say about it. His songs bopped with the rhythms of house music and fused with the soul of jazz.

What stands out the most about Channel’s performance is that his husky voice spills out confidence. For those who “don’t see color,” Channel Tres demands that you acknowledge the beauty in his, reminding everyone that he’s a “sexy black Timberlake” and a “brilliant nigga.” With two black dancers joining him on stage, he dances as if no one were watching–and also as if everyone were watching, because what’s the difference for an artist who has mastered self-love?

Channel Tres tells FRONTRUNNER about his Black Moses EP, how he connects to the spirituality of music, and how he is working to break stereotypes.

You don’t shy away from your blackness. You titled your EP Black Moses, and released songs like “Sexy Black Timberlake” and “Brilliant Nigga.” How has this part of your identity, or other parts of yourself, inspired your art?

I’m black. It’s just something I had to get comfortable with, because we grow up with a lot of misconceptions depending on what neighborhood you’re from or what your situation was, and I started to take notice of all those different things. As I got to college and started my life, I’d be having these things in my head like, “I’m not gonna compare myself to this dude or this other person,” or just being frustrated because I feel like someone is getting an advantage because of their skin color. Just kinda saying all that shit doesn’t matter. It’s all about self-love. So I gotta love myself and the skin I’m in, because looking for approval from everybody, or handouts, I don’t want it like that. Whatever is going on, and all the misconceptions I grew up with, and all that I’ve been through, and the shit I’ve done–that’s what makes me who I am. I have an edge over myself that nobody can take from me because of the way I grew up. I’m just tryna spend time right now in life changing the way I look at that. Being black is a big part of it.

Compton is known for birthing some of the greatest artists of all time. Has the Compton culture shaped or inspired your music in any particular ways?

It shaped the way I talk and the language I use, and shit like that. It shaped certain things, like the slang I use. You can tell I’m from LA–it’s just a part of me. I’m a little cocky too, being from LA, because that’s just how we are. We not about no bullshit. If you not about to build something or talk about money then it’s like, “Nigga, alright.”

Your debut album is called Black Moses. What inspired the title, and what can listeners expect?

It sorta happened to me in church when I was a kid. Someone told me I’ll be the Moses of my family. In the Bible, Moses led people to the Promised Land, so it’s a reference. To see how my life is right now and how I’m traveling and breaking a bunch of stereotypes and a bunch of misconceptions that I’ve had over my life by just being black, it just means leading the people to the Promised Land. I’ve been using the word “black” a lot, because when you grow up in America it has a negative connotation to it, or it’s associated with something negative. Just putting that word out there so that you can see that word more. It needs to be used in the right way, so to speak.

Tell me more about growing up in church. Has gospel or church culture affected and/or inspired you musically?

It inspired my live show, because that’s just how I learned to let the spirit take over, because you gotta surrender to music in church. If I try to hold on to myself too much then it’ll be bad, but once I let go and surrender then the spirit takes over. That’s how I am with live shows. I just kinda black out.

Also, [church] tells me the spirituality behind music. It’s hard to go [to church] now because sometimes it’s a little, “Woe is me,” and I’m like, “C’mon, man.” When I’m having a tough time, or when I was going through it, that music heals me, and I had a great time growing up in church. It taught me that God is real. And it doesn’t have to be like that, it can be whatever you want. I’m kinda agnostic, but it taught me the spirit behind the music and the healing and the soul.

You wear many hats as producer, musician, DJ, and more. What was your process when you were making Black Moses?

I just got in the studio and made a shit load of songs, and narrowed it down and picked the best ones that I like. To talk about the concept, I kinda sit with myself and talk to my family and hang out with my homies and shit. Just talking stupid shit. I got some really cool friends that I hang around with. Through that, I kinda figure out what I want to do and what I want to say, and every project is about how I feel and what I want to say. When I resonate with that, it makes it easier to create the music when writing words and doing different sounds. I just brainstorm and hang out and make a bunch of stuff, then I go back and listen and be like, “Oh this is tight, I can use this.” Then I get to finish it. I get the team together and ask what they like and take all those things into consideration.

The Black Moses EP, I was working on while I was on tour a lot, so I had the chance to see different crowds. When I was on the tour with Vince Staples, for example, I didn’t want to do all dance tracks. I wanted to do something that was in hip hop because I’m in front of a rap crowd. That’s how I made “Black Moses” [the track]. JPEGMAFIA was on the tour too, and I was like, “I fuck with this nigga.” We kinda had the same vibe in different ways. I was like, “fuck it,” and I made the song, and he got on it. I never would’ve made that type of song if I weren’t on the hip hop tour.

You’ve toured with Childish Gambino in Australia and on a US tour with Toro Y Moi. What’s your favorite part about touring and performing live?

I just like performing live and traveling, because when I’m on tour I’m the most healthy, versus when I’m at home just sitting around making music, playing video games, and reading. But on tour I gotta move around, I gotta work out, I gotta jog, I gotta jump rope. I get active, and I get alone time with myself. Sometimes when I’m at home in LA it’s a different type of hustle so I’m working nonstop, but on tour I actually gotta get rest and take care of my voice. It’s good “me time” kinda.

Any fun stories you mind sharing?

Stories? It’s a lot. Shit, I don’t know. When I was on the rapping tour, afterwards everybody is pulling out the DJ tables and just having a showdown and playing ping pong to the DJ music and drinking champagne.

You’ve worked with Wale, Kehlani, and Duckwrth, and also received praise from the Rocket Man himself, Elton John. Who are some artists that you really want to work with or have inspired you?

A lot of people inspire me. I want to work with Daft Punk and Stevie Wonder. There are a lot of people I’m working with already. I just don’t want to say their names yet. It’s a long list of people. So, I just appreciate being in the music world.

You incorporate aspects of a lot of different genres. How would you describe your sound?

It’s just me, if that makes sense. It’s like gumbo. There’s just a bunch of things that you would think don’t go together, that all fits together. It’s a bunch of different things, but when you put it together it’s just a special recipe. Everybody’s gumbo is different. 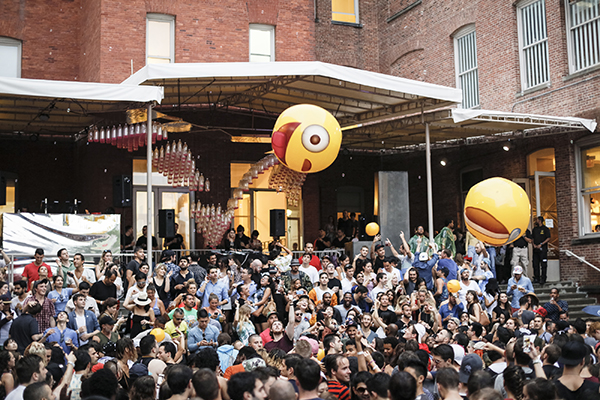 ..dozens of pink two-liter water bottles hung above turntables on a raised stage. They bobbed and swayed throughout the day, hovering like an aquatic crown to the talented DJs and producers that helmed the decks..