A single B Boys song was enough to intrigue Captured Tracks, the revered Brooklyn-based label that represents artists like Mac DeMarco and DIIV. The label, recognizing the local band’s latent talent, quickly signed them, and they’ve since released B Boys’ debut EP, No Worry No Mind.

B Boys are “three psychos that came to be through fate by way of necessity”—in their own words. In a highly entertaining and largely metaphysical bio, the trio describes the new record as “a relief from the mania, an expression of duality, an extension of Dadaism.”

Sounds that transcend a linear timeline, splintering out across multiple spectrums.  Interlocking vocals skillfully bob and weave overtop, their mantras resounding. But don’t be fooled, they’re just like anyone else — they put their chinos on one leg at a time.”  It’s profound. It’s witty. It’s silly. It’s all of the above. The B Boys—Andrew Kerr, Brendon Avalos, and Britton Walker — are self-described jokesters, but they take their music pretty seriously.

The band rocks some legitimate post-punk that’s half glisten and half grit, and it nearly always presses hard. Amidst all the cosmic profundities, though, that playful realism of regular, chinos-wearing dudes shines through. It’s refreshing.

I spoke to Kerr on the phone a week before they kicked off their first major tour at Brooklyn’s Union Pool. It got pretty astral.

Would you mind talking about how you first got into music? And how that path led you to connecting with B Boys and getting into that scene?

L. Well for me, my father was a folk musician when he lived in Australia after the army. I grew up in a pretty musical home. Learned how to play guitar pretty early and started playing the drums after that. As far as how B Boys came together, I was living in Gainesville and some of their [Brendon and Britton] friends from Denton—like that whole Parquet Courts crew—some of their earlier bands played at my house a couple different times on tour, so we all just had mutual friends from that scene.

Do you guys know Future Punx?

L. Yeah those are our good friends—I’ve known Heather [Strange] and that band for a long time. And Brendon and Britton know Chris [Pickering] and that whole crew from Texas.

Yeah you can definitely hear the similarities between you guys, them, and the Parquet Courts—that kind of vibe.

L. Yeah it’s cool. It seems like everyone that came out of that scene over there is pretty unique as far as what they’re willing to experiment with in music.

So when did you guys all come to New York?

L. We all came here at different times, but started playing together in 2014. I moved here in 2012. I think Britton was living here around the same time, but Brendon didn’t come here until a little later—or he came and then went back to Texas and then came back again. So yeah, we all came together in 2014 through all those same people.

Yeah, you guys recorded some of your tracks, and then you weren’t in the same place for a while, right? That’s why you guys haven’t toured?

L. Yeah, it’s pretty funny. We were a band for a little less than a year before we recorded that record—only played a handful of shows and then we recorded it. And I immediately moved out to Idaho for a summer to work in the woods. Britton went to D.C. for coding school for six months, and then went to Chile from there. And I went from Idaho to Florida. So we’ve all just been boppin’ around. Brendon’s been the only one in Brooklyn the whole time. We played some shows in September and again in December and now we’re all together, demoing the new record and gearing up to go on tour.

So when you guys were apart, that’s why you had to meet in the astral plane?

Is there more of a story to the astral plane imagery you guys use—mantras, vibrations. Is that an inspiration in other ways?

L. Yeah, it definitely is. But at the same time, everything we do is pretty light-hearted. We’re pretty silly people. But we are all definitely into meditation, trying to keep your mind aligned with your body, trying to feel good about yourself and about life. We try and stay pretty positive, channel the creativity as much as we can in as many different ways as possible. I mean, Brendon is a reiki healer—we’re pretty into that scene. But yeah, we’re also jokesters. The whole bio kind of came about a little tongue-in-cheek.

But there is some more profound truth to it?

L. Yeah in a way it’s us kind of making fun of ourselves.

You’ve said that your music is an extension of Dadaism—could you talk about what that means to you? [The following answer was shared via email.]

I can’t really speak on behalf of the entire band, but I would say the socio-political aspect of Dadaism isn’t directly relevant to what we’re doing now. It’s more so the experimental aspect of it—about adopting/adapting the processes developed during that movement for our own creative practice. The artwork for our record, as well as the meditation-pamphlet-as-insert, utilizes some of these concepts (collage, readymades) but with a tone of our own. Again, I would say we’re almost trying to reinterpret what Dada could mean to more accurately represent our band.

Since you guys all have your own individual practices—when you come together to play music, how does that manifest? Are you all pulling from different influences? Is the sound more intentional? What’s the process?

L. I would say we definitely don’t try and think consciously about sounding any specific way. We all have really different tastes in music, and all those influences make flourishes in the stuff we create. But when we get together, we just play whatever’s natural. It’s a pretty organic process. We write something pretty much every time we get together and then come back to it at some point.

What music are you into, specifically? What are the influences that you’re contributing to the sound?

L. Everything filters in a little bit. I take a lot of drumming influence from world percussion and jazz, but then also punk rock bands and soul bands. I would listen to D’Angelo just as much as I’d listen to X. We’re all into a bunch of different shit. Donnie [Brendon] makes techno tracks. Britton does some pretty cool pop stuff. I do a lot of experimental jazz and ambient music with my brother, who’s also a musician. We pull from a lot of different things.

Where’d the name B Boys come from?

L. It came from a practice space calendar, actually, that Britton and Brendon both had and we were using. Britton has always been known as ‘B Boy’ amongst the whole Texas crew, so we didn’t have a name, and they were trying to write out a calendar for practices. Someone had just written on it ‘B Boys’ because they both had names that started with B’s…Yeah when it came time to settle on a name, we were joking that it’d be funny if we just kept that. Now here we are. 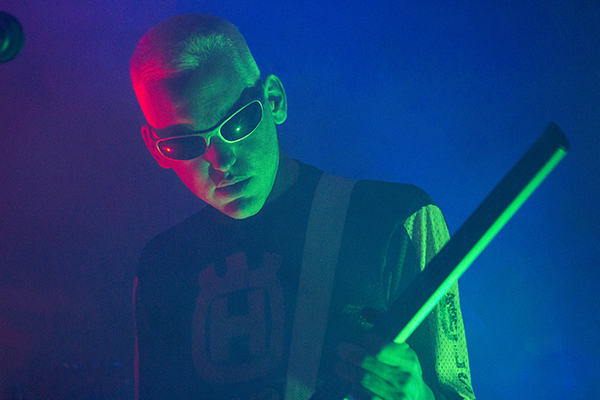 We’re coming from a punk background but we don’t want to limit ourselves in any ways. We’ve learned to express ourselves in a certain way, but we want to broaden the palate infinitely.