Alexi Marshall celebrates womanhood in her practice, emphasising unapologetic female bodies. Drawing on a range of mediums such as print, fabric, and mosaics, Marshall seeks to subvert gendered stereotypes through her work. She redefines fixed narratives pertaining to femininity, using a combination of folklore, myth, and religion to infuse her practice.

Born in 1995 in London, Marshall graduated from the Slade School of Art in 2018. She is the recipient of several awards including the Boise Travel Scholarship and the Antony Dawson Print Prize. The year she graduated, she was selected as one of the ‘Bloomberg New Contemporaries’ exhibiting at Liverpool John Moores University and The South London Gallery. Group exhibitions have been mounted at Izo Gallery, (Moscow), Sara Zanin Gallery (Rome), Flatlands Project (Hastings, UK), Daniel Benjamin Gallery, (London), and the PMQ (Hong Kong).

FRONTRUNNER spoke to Marshall about the conceptual premise of her art, discussing her unique play on medium and how this relates to wider, cultural contexts.

Your practice places a large emphasis on the female body. Would you consider yourself a feminist?

Definitely. I love portraying women – I try to depict them as bold and unconstrained, almost fearsome in their sexuality.

Is the aim of your work to reshape negative stereotypes towards women?

I take characters from history and re-imagine these figures, giving them a new identity through my own perspective. By allowing their stories to be retold, I hope to give them agency. The characters become my own personal deities in a way – symbols for different archetypes or fates.

How do your own experiences filter into your practice?

I weave my own biography with well-known stories from folklore and myth. It masks the reality of my own life and becomes something else entirely.

Tell me about your exhibition The Redemption of Delilah (2019) in London.

That was the first solo exhibition I ever did. It was a retelling of the story of “Samson and Delilah”. It all happened because someone very close to me had passed away, and I felt this intense amount of guilt and grief. I’ve always been super drawn to femme fatale characters, and I thought about Delilah and the guilt she would have felt when she betrayed Samson. So, I was trying to link my own experience with that historical element.

Tell me about your recent solo outing, Cursebreakers.

It was inspired by the curse that’s been put on my hometown, Hastings, by Aleister Crowley. I was going through quite a dark time before I got the news about the show. This idea of breaking curses, breaking old cycles; breaking through oppression and adversity. The exhibition acted as a metaphor for rebirthing oneself: a regeneration.

How does your use of medium play on gendered stereotypes? I’m thinking specifically of your use of embroidery and textiles – skills considered to be “women’s work”.

My practice spans quite a few mediums and some of those can be seen as quite “crafty” and looked down upon, which I’m trying to subvert. A thread that runs through all of them is that everything is handmade. Even when I do prints, I don’t use a printing press – I do them on the floor and physically print the paper down. Everything is quite tactile. I want to embrace the craft and that autodidact spirit – elevating it into something that’s on par with fine art.

Talk me through your creative process.

I visualise ideas in my head and once I’ve decided what I’m going to do, it often starts out with a pencil drawing or a rough sketch. There isn’t much change from the initial idea to the final piece, which is quite different to how most people work. That tweaking element almost happens in my head before I have even started drawing. I read a lot about folklore, and I grew up Catholic – those stories of saints and sinners are part of me. Sometimes the inspiration will come from a story that I’ve seen or from my research – or it will be the other way around and something in my life will happen that sparks an idea. Narrative is really important in my work.

What role does colour play in your work?

I’m a bit of a novice at colour. Recently, I’ve been edging towards using colour in a more subtle, nuanced way. I want colour to emphasise this otherworldly environment in my work. I try to use a mixture of things that are naturally enriched with colour, such as green grass, alongside a gradient sunset or sky. My practice is about blending those naturalistic elements with the surreal to build new worlds.

Your work merges the human figure with bestial, animalistic features. Are you influenced by the Grotesque?

Yes, definitely, especially in my earlier works. I did this piece called “The Girls Who Made Me” (2017). It had all these intertwining female bodies and some of the faces are quite grotesque. I use animals to signify our primal nature. That’s a big theme in my work – I often use the motif of the wolf to showcase the distinction between our outer human shell and the parts of ourselves that we mask underneath. It links back to the folklore as well – these old stories have been around for centuries, and they brim under the surface of contemporary life and the modern world.

What is missing in art?

There should be more financial support for emerging artists so that they have easier access to the art world – it should be less elite.

What advice would you give to upcoming, young artists looking to break into this industry?

Don’t compare yourself to others – you’re on your own journey. I spent the first two years of my university experience suffering from imposter syndrome. You need to focus on work that you’re genuinely interested in and stay true to yourself. Don’t worry about the pace that others are going at. Trust in your own talent.

Liv Leftwich
Liv Leftwich is an Art Correspondent for FRONTRUNNER. She is a graduate of English and Related Literature from the University of York, U.K. She has always had a passion for the arts and the written word, with a strong focus on visual culture. Leftwich lives and works in London. 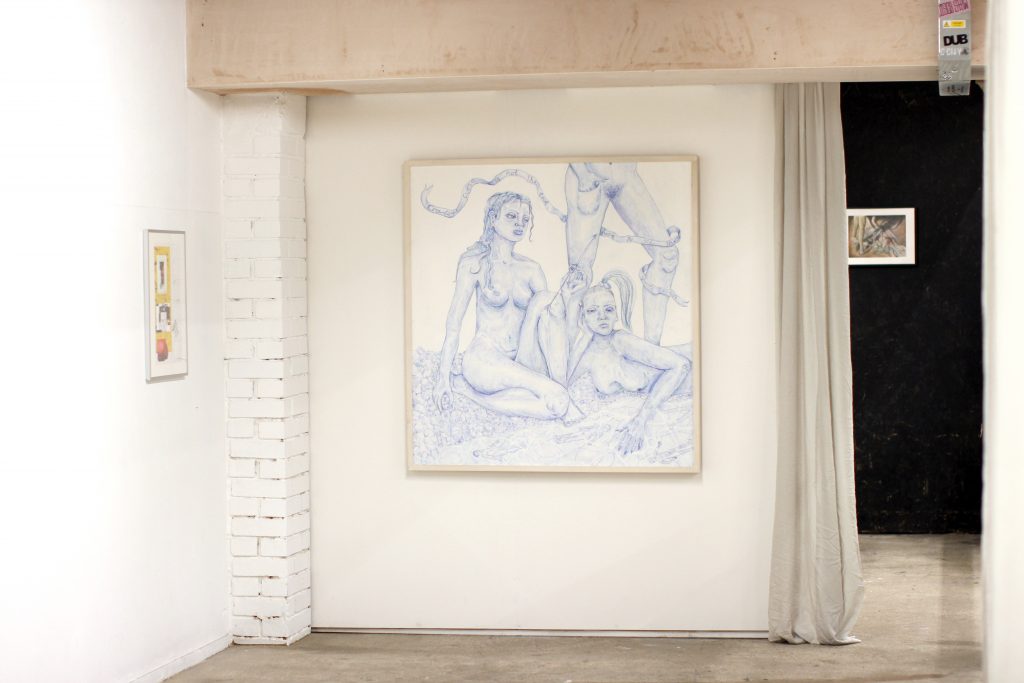 Artists Ben Urban and Billy Stanley are the forces behind Flatlands Project: an alternative project space in Hastings, on England’s southastern coast. 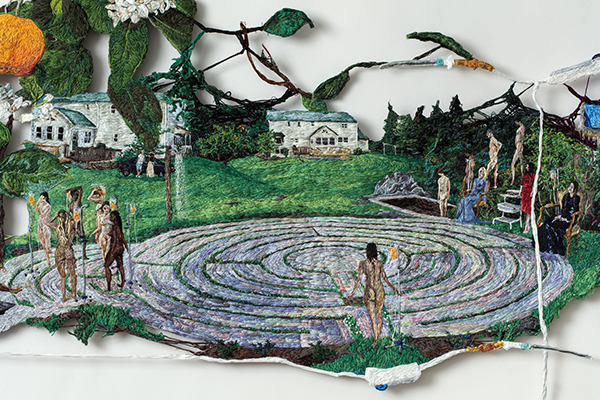 I was looking for more of a material connection than I had personally felt with paint and with the rectangular image. But in the moment, it felt really spontaneous. Thread solved a lot of the problems I had in painting–formally. That is also why I ran with it. It forced me to slow down.