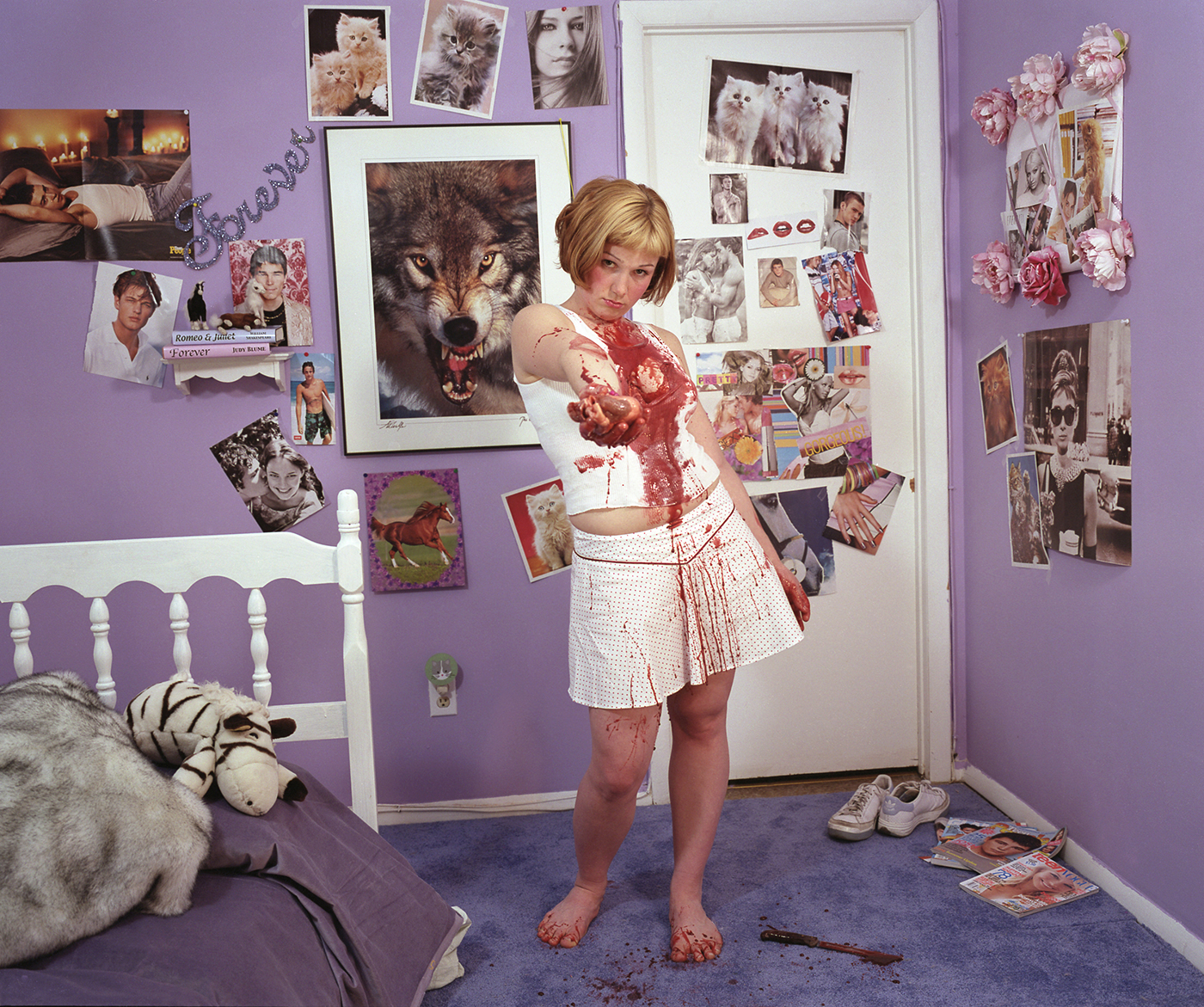 Symbols or patterns have feelings either in the color or subject matter. Maybe they can evoke a larger narrative. Tell me about your current interest in wallpaper and pattern making.

This current series of work, hand–painted renderings of wallpaper, started a few years back when I was making drawings and videos that were specifically dealing with imagery from commercial advertisements targeting young women.  I was interested in my own responses to this imagery- how comfortable it was for me to be with certain images – how familiar they felt. All of my work, from my very earliest videos, has explored the power of commercial images, which for me comes from some deep place of wanting to be the image.  And I became more and more obsessed with the power of a commercial industry to define my relationship to myself.  In most of those early videos I was building sets that involved a very specific aesthetic referencing my own childhood or the bedrooms of female characters on television shows.  At a certain point I became really interested in these backgrounds as being the foundation on which this whole world of influence was built.  The Kate Moss ad taped upon the Laura Ashley wallpaper.   I began to become really interested in the wallpaper as a different form of commercial print media that was perhaps equally or even more influential of my experience.  The earliest wallpaper pieces directly reference wallpapered walls with images taped onto them.   They were predominantly Laura Ashley patterns, referencing a specific time in 1980s and early 90s where British brands like Laura Ashley were imported to suburban America in mass quantity as a marker of upper middle class taste and style.

With these early wallpaper pieces I was interested in juxtaposing these two forms of print media (wallpaper and advertisements) but placing all the care and emphasis on the background by painstakingly rendering the pattern by hand and then placing a digital reproduction on top of it. Maybe this is a bit in line with thinking about those background patterns and how quietly though not passively they sit in the background- I imagine their influence works on us at a slower pace day after day while hardly being noticed.  All the energy in making the work really gets channeled into the pattern and then the image, a quick digital reproduction, gets taped on top becoming the focal point while the underlying pattern works on you.

Over time the patterns themselves have developed, exploring not just the space of the adolescent female interior but how that cultural influence functions in more “mature” patterns. 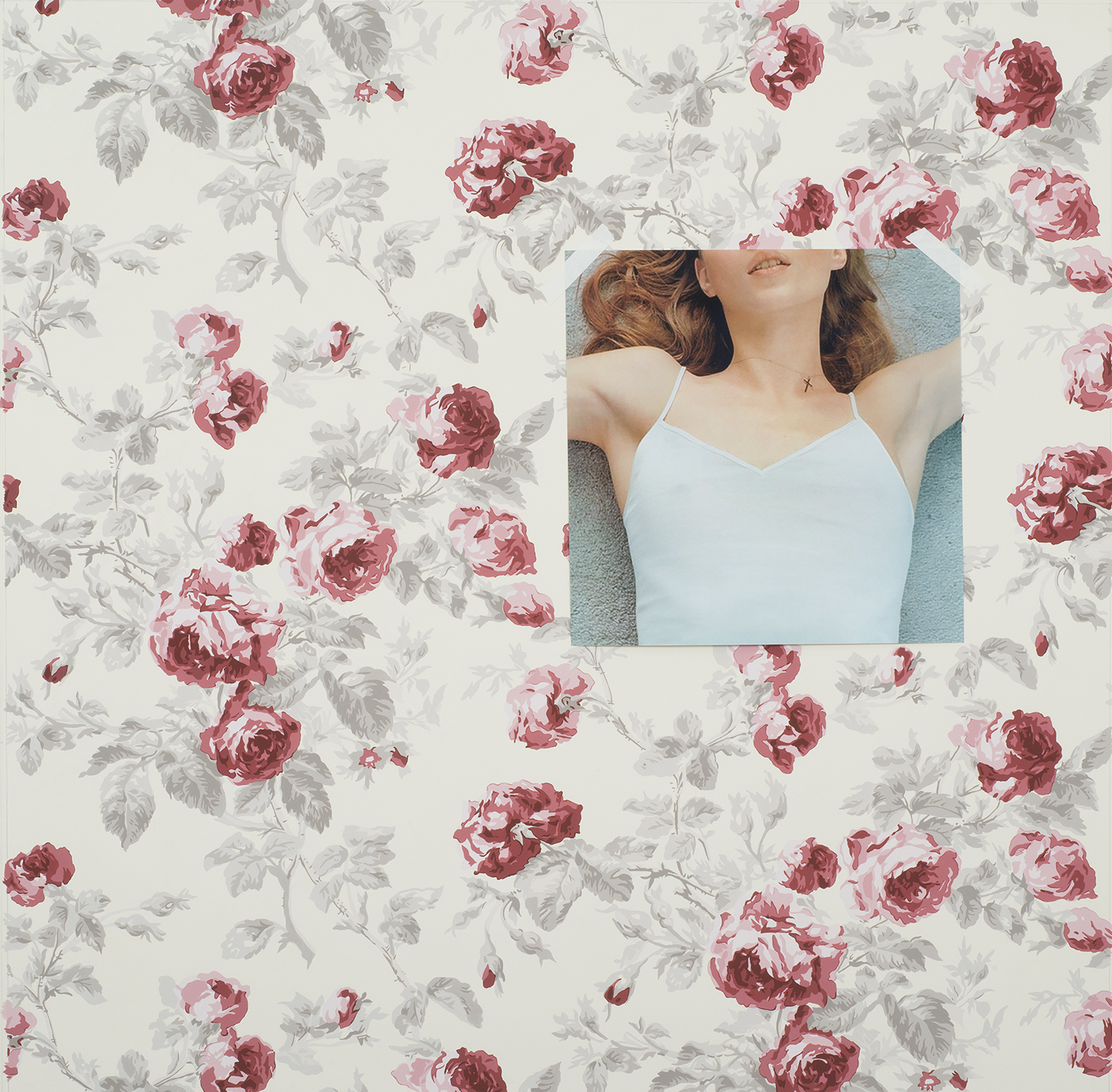 What first inspired you to make videos and act in them?  How did you find your character, research and develop the narrative, and produce the videos?

Like I mentioned above, my early video work really came out of this obsession with commercial images selling back to me what it looks like/feels like/should be like to be a young woman.  My own messy internal experience didn’t match up to these images and I started going really over the top in making these photos or videos where I would try to merge myself with this army of images- almost flatten myself into an image, like in Sweet Sixteen or the Teenage Daydream videos.  I would essentially destroy or obliterate myself in the attempt to match myself to a certain image.  And it always involved a tremendous loss- those works are all really tragic because they illuminate what happens when you are willing to abandon everything else in favor of the image.

A lot of these characters came from very specific images I was mimicking.  Romeo & Juliet ( I Wanna Be Claire Danes) is a low-fi attempt to try to achieve the cathartic emotional drama of Claire Dane’s final scene in Baz Luhrman’s film.  Test Run, in which I try to take a home video of myself drowning in the bath takes its inspiration from a multitude of romanticized images of female drowning but most specifically Britney Spears’ portrayal of it in the video for her song Everytime.

Regarding production, those sets were all built in the kitchen of my first railroad apartment in Brooklyn.  Mostly they were designed with décor borrowed from Urban Outfitters.  They were all shot alone in that apartment where I had built a terribly unstable lighting grid on the ceiling and was constantly blowing fuses.

Tell me about your series of patterns within cushions and wallpaper.

I was making a piece from the original series of wallpaper paintings and thinking about the insidious nature of patterns and how many times I have lost myself in staring at or into them.  I was thinking about a particular memory of staring at a spot of wallpaper on the ceiling that had been applied slightly off register and how in that spot everything felt like it could just slide out of place- like a glitch in the Matrix or something.  And that’s when I started making the wallpaper pieces that don’t have images on them but that have varying degrees of disruptions in them – places where the register is off or the pattern starts to get irregular.  And as I felt more and more free to alter the pattern, the works really moved further into the space of painting and abstraction and I started thinking of them in relation to things like Barnett Newman’s Zips or Gordon Matta-Clark’s architectural interventions.  I like the idea that the work can be interpreted through a lens of realism (an illustration of badly applied wallpaper) or abstraction (a decision to shift a plane or disrupt a color field.)

Recently the works have started to spread onto multiple panels – the pattern carrying over from one panel onto the next.  These works have me thinking about the panels as modular elements that can be exhibited separately as paintings or combined to create a larger unified wall.  As an installation, this unified wall of pattern covers the gallery wall – kind of like a façade or like makeup, but one that is so clearly a transport and not convincing at all as a wall that belongs in that space.  I’ll be showing an installation of one of these pieces opening later this month at MuseumofAmericabooks, a project space in Bedstuy.  The pattern on those pieces is a subdued lavender quilted boutonnière pattern that could reference either the luxurious walls of a castle like Versailles or the padded walls of an asylum.

Tell me about your Joan of Arc video and how you followed her narrative and performed a transformative action of your own.  How did the narrative develop?  Was the narration written after the haircutting for instance?

Joan of Arc is one of my favorite pieces. It was really a labor of love and I experienced a lot of heartbreak and self-discovery through its making.  It is probably the most obvious example of really trying to achieve something internal through physically transforming my externals to match an image. The narrative developed, like most of my videos, with an image that I was obsessed with- in this case the image of Maria Falconetti portraying Joan of Arc in Carl Dreyer’s film The Passion of Joan of Arc.  The longing I felt when watching her performance was so unbelievable I knew I had to do something with it.  So I decided that the first step was to match my physicality to hers to try and get closer to the experience of both Joan of Arc and Maria Falconetti – who I had heard had an incredibly tough time with that role and the loss of her hair.  So without too much thought I bought some shears and went home and set up my camera and cut off my hair in one snip and proceeded to shave my head and enact Falconetti’s physical poses from various scenes in the film.  As usual, the catharsis I was aiming for wasn’t there during the filming – mostly what I felt was emptiness.  However, the next day when I woke up and had to confront the world as someone with a shaved head rather than someone with long blonde hair I was really shaken.  It had never occurred to me just how much of a factor my hair was for my identity – both in how I felt and how others responded to me.  Side note – I happened to do that on the same night that Britney Spears shaved her head and bashed car windows with an umbrella.  Everyone kept asking me if my head shaving was related to hers or if I was making some piece based on her.  This was really interesting as well to see my own response – as if making a piece about Joan of Arc felt more legitimate than making work about Britney Spears.  As I proceeded to make and edit the two channel video piece I decided to include a voice over track candidly talking about this ill-fated attempt to attain a certain something I saw in Maria Falconetti’s image and the devastating excavation of my own identity that I experienced as I did so.  Ruminations on my strange experience of making the piece plays alongside the epic Voices of Light score from the film.  So the idea came before the hair cutting but ultimately the direction of the piece was largely driven by the intense emotional reactions and embarrassing self-discovery brought about by the haircut.