Bianca Brown September 29, 2020
Forming bonds with others is an integral part of human existence. It’s been scientifically studied and psychologically proven that we need to form bonds and connections with others in order to survive. We continue to find ourselves adjusting and readjusting to new ways of life during a worldwide pandemic and other uncontrollable events. In all of this change, forming bonds while remaining socially distant has become increasingly more difficult. Offering a solution to this problem is the Oshawa, Ontario-based collective Dizzy. Katie Munshaw is the lead singer alongside the trio of Spencer brothers: Charlie (drummer), Alex (guitar), and Mackenzie (bass). This group of friends is changing what it means to be together while being apart. Brandishing emotionally impactful and relatable lyrics, any one of their singles will immediately connect you to yourself and to the millions of their fans, known as the “Heartbreak Club”. Every track plays like a cinematic accompaniment to a coming-of-age blockbuster film that we simply cannot get enough of. Their latest record, The Sun and Her Scorch, is now out from behind the clouds.
FRONTRUNNER introduces Dizzy’s lead singer, Munshaw, who will more than likely be in all of those upcoming Fall playlists.
I know Dizzy’s roots stem from the long and lovely friendship you and Charlie have had, but what was the initial spark, so to speak, that lit the Dizzy flame? What drove you both to carving your own paths and starting a band after high school?
I think Charlie really had his heart set on that probably from grade eleven, and that just wasn’t something that was on my radar because it wasn’t something that was encouraged in my family. My family was really encouraging of going to school and getting a nine-to-five job and like settling down. He was really the person who asked me in January of our graduating year and he was like, “you wanna do this?” and I was like, “that’s an option?! Sure!” [Laughter]. So he was really the spark that did it and we had a little duo for a while and then we realized that Mack and Alex, Charlie’s brothers, were just hanging around as well. It just so happened that Mack plays bass and Alex plays guitar and we were like, “We have a band here, why don’t we try it?” It worked out really well!
That entire situation was like a match made in heaven!
Yeah, and everyone was just hanging around. Pretty weird, but it worked out though!
Back to the Juno Awards last year, to the very moment you guys heard your name called. How did it feel to hear that the insanely talented collective of friends from Oshawa that had put their blood, sweat, and tears into their craft had won Alternative Album of the year?
We were shocked. We were not expecting to win…like we honestly went for the free drinks. We were on tour and we flew back and we were like this is like a wedding! It’s an open bar, let’s just have the best time ever! And so, we were trashed [Laughs] not expecting to have to get up on stage in front of Michael Bublé and all of these people that we that we looked up to. Right before, somebody was like “you should probably think about what you’re going to say if you do get called” and I was like “Nah”! So yeah, we were really surprised and you could probably tell that from the acceptance speech that you watched Yeah, we were totally overwhelmed but really grateful.
I think it makes it better when people that win the award are not expecting it, because you can just tell they weren’t expecting it by their reactions [laughs]. I love that you guys went there with the idea that you were just going to get drunk and have a good time. I mean, you still did and won. So we love that.
Yeah, it’s actually funny that night we had rented a car and we were so late to the show—we had to perform—and we had to park up front but there was nowhere to park! We asked some random guy if we could park in this spot and he was like “yeah!” and then we won and after we were like walking back out and they were just about to tow our car! [Laughter].
I love that this random guy gave you the “OK” only for you guys to come out to an almost-towed car.
[Laughs] Yeah, curse him!

Winning a Juno Award is truly an accomplishment, so a very late congratulations to you all! Moving forward from that, unfortunately, has placed us all in the midst of a global pandemic where life itself appears to be buffering a bit. With all that is going on, what has kept you motivated to continue creating and sharing your truth with the world?

Bianca Brown
Bianca Brown is a music correspondent for FRONTRUNNER. She received her B.A. in Philosophy from the University of California, Los Angeles. Brown has contributed to Live Nation's Ones to Watch, Lyrical Lemonade, and World Wide Waves. Brown is currently based in Los Angeles. 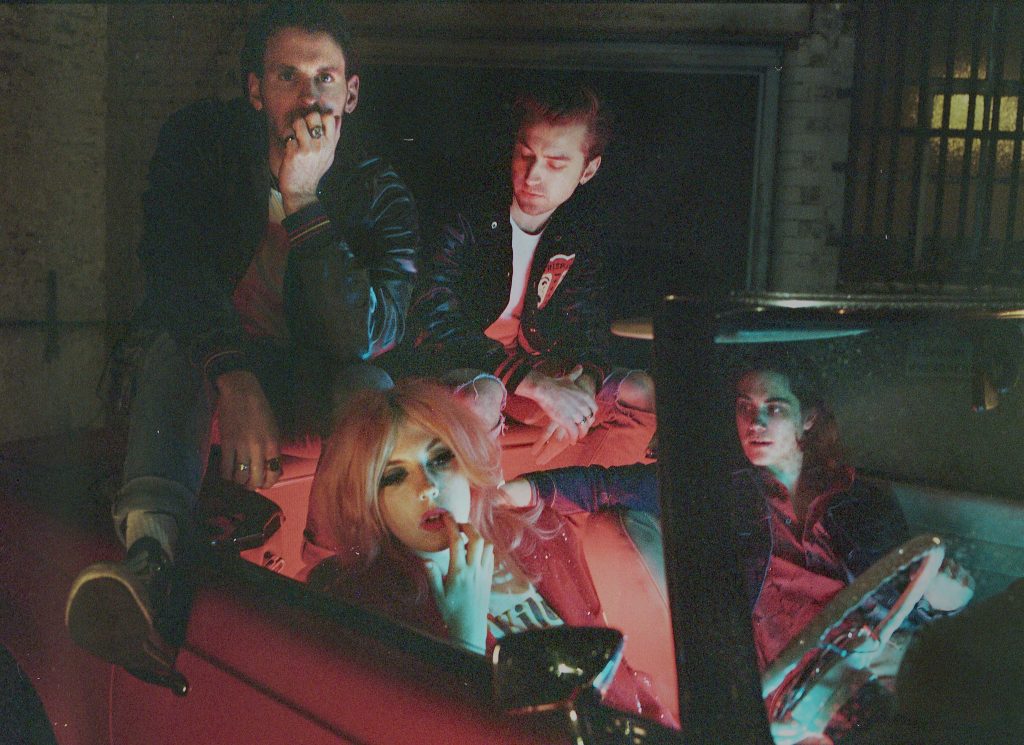 If you can’t make up your mind on whether to listen to Nancy Sinatra or Nirvana: lovechild Black Honey demands to be heard. With their retro film-inspired aesthetic, the British quartet transports you to the movie set of their world.